Posted in: Disc Reviews by Michael Durr on December 3rd, 2012 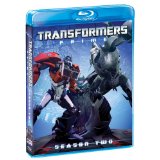 There was some real enjoyment when I took on the reviewing reigns for the first season of Transformers Prime. It was the best thing since the infamous Generation 1 cartoons and showed great sound, dazzling video and fantastic character development. Now, we enter season two and if we watched the teasers, we learned that Optimus Prime was branded with the Decepticon logo possibly meaning the impossible. How could this be? Well tune in true believers, we shall find out all this and more.

In light of Unicron’s awakening, drastic measures needed to be taken (such as Optimus Prime and Megatron uniting as a team). The Matrix of Leadership had kept Earth safe, for now. But when Optimus lost the matrix, he lost himself too and reverted to his form before he assumed life as a Prime. That life he was simply known as Orion Pax, librarian and researcher. Doing what Megatron does best, he deceives Orion into joining him on his ship and branding him under the image of a Decepticon.

Meanwhile back at the Autobots’ base, Jack (one of the humans) has been entrusted with the means to recover the memories of the Primes and transfer them back into the Matrix of Leadership. However, those memories can only be gained through Vector Sigma which is located on the planet of Cybertron. Currently, the Autobots do not have a spacebridge worthy of transporting Jack to the fabled planet. But things can change.

At the Decepticon’s ship, Megatron is able to convince Optimus that he is indeed Orion Pax and not only that, but that the Autobots are evil bots trying to rob Earth of its precious resources. In addition, Orion Pax has started work on Project Iacon which has the bot decoding ancient text that will uncover special relics that unbeknownst to him would allow the Decepticons to defeat the Autobots and take over the world.

The Autobots are still trying to figure out a way to get their precious leader back and Jack on a bridge to Cybertron when they get word that Knockout and other Decepticons have hijacked a nearby power source. A fight ensues with the Decepticons gaining the advantage and escaping back to their ship. However, Arcee, the female Autobot decides to catch the Decepticon spacebridge at the last moment in her attempt to find Optimus.

Due to some thinking, Megatron uses Arcee’s rage against her and prevents her from running into Optimus Prime and reminding him of his true origins. However, in the wake of distraction, the renegade Decepticon, Starscream makes his way on board in search of Megatron. As he goes through various bots who have been ordered to shoot him down, he comes upon the door where Orion/Optimus is working. Starscream opens the door to the shock of Autobot leader inside. With guns raised and ready to fire, we draw to black.

The second season picks up with the same intensity as the season before it. Transformers: Prime has an excellent way of continuing an edge of the seat story that allows diehard fans to stay glued to the story but also allow new fans an entry into one of the best animated shows in recent memory. Character development is excellent but the evolving story of the series feels both familiar and going into new places never explored by a Transformer with a darker edge and a somewhat more adult feel.

But do not be dismayed that Transformers Prime is not appropriate for kids. There are plenty of good messages here for little ones. Back to the adults, one has to enjoy the development of Starscream as still my favorite Transformer to this very day. He is still devilish in every twist and turn but he does it so darn well that even the Autobots have to cooperate with him occasionally to get the information so near and dear to them. Overall, Transformers Prime is still an awesome cartoon and there is hard to say anything negative at all.

The video is in 1.78:1 Widescreen presentation at 1080p. The video is a mixture of 2d animation and CGI and the work is done by Polygon Pictures and Digitalscape Company Limited. The result is simply gorgeous. Some people might be looking for more classic animation but I found the overall production to be great here. Blu-ray does this show a world of good and the colors are fantastic. Backgrounds are usually well done and every effect or piece of animation seems to pop out at the right time.

For the audio portion, we get a 5.1 DTS-HD Master Audio track in English (2.0 PCM track also available). By the same token, the sound track is spectacular. Dialog is crystal clear despite the numerous voices on display here. Still wish I knew what Bumblebee said (that’s a joke btw). Anyway, the sound stage is very dynamic with surround effects and movement comes out of every speaker as necessary. Reference material to say the least and might just wake up a neighbor or two.

Transformers Prime is certainly not going anywhere. With a third (and most likely fourth) season already making its way to the television screen, there is no visible end in sight. The show has also won 3 Daytime Emmys to this point and nominated for many more. This season shows more twists, more turns while sticking to character development and giving us viewers that great action we have come to expect.

Shout Factory has provided another great multi disc set with awesome video and audio. Unfortunately this time around, the extras are a little thin and the retail price is a bit high but rest assured this is still a very fun and packed set. I give this set a hearty recommendation. Most of you know that I gush about this series every chance I get and even though this might be the last season I have the privilege to review, I am glad to say I have enjoyed every minute of it. Chances are you as the viewer will enjoy it too. Get it now.

Michael Durr has been reviewing movies for the better part of fifteen years now. He primarily enjoys thrillers, sci-fi, animation and even a little courtroom drama. His favorite films include Escape from New York, the Goonies and anything with Alyssa Milano. When he’s not praising Kurt Russell as the greatest actor of our time or scratching his head over a David Lynch flick, he’s spending time at home in Texas with his lovely wife, Lori and his amazing son. How they put up with him is a mystery, but even Basil Rathbone doesn’t have the time to solve that one.
An Evening With Peter Frampton Hope Springs