Posted in: Disc Reviews by Gino Sassani on December 6th, 2012 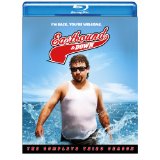 I didn’t see the series during either of its first two seasons on HBO. When the second season arrived to be reviewed I was more than a little nervous about jumping in without knowing what had come before. Certainly, I checked out the buzz on the show and got an idea of what it was about. But nothing could have prepared me for what I finally encountered when I popped that first disc in my Blu-ray player. It’s safe to say that you can join this show for the third season without having seen the first two. I’m sure it helps, but it didn’t take me more than five minutes to completely understand who and what Kenny Powers was. He literally speaks for himself. I’ll give you a quick up-date.

From what I can gather the first season introduced us to Kenny Powers (McBride). He was a talented pitcher for Atlanta. He’s the stereotype of every self-centered athlete we’ve ever seen. He cares only about himself and has no respect for the people around him, and that obviously included his teammates. His attitude got him in hot water with the commissioner and out of Atlanta. He ended up as a teacher in a local high school where his antics didn’t go over any better. Whoever thought this egomaniac with the toilet mouth belonged in a room with kids was probably on crack at the time. When last you saw Powers, he was about to go to Tampa to play for a new team. So he’d packed up his life and girlfriend April (Mixon) to start their new lives in Tampa, when the hammer fell and the deal fell through. What does Powers do then? He leaves April standing in a gas station parking lot and heads out of Dodge. So where did Powers go?

“Sometimes I did wonder about them. How they’d deal with the holes, the agonies, the darkness that no doubt fell upon them when I rode off into the sunset and took that sunset with me. Do they even remember what it’s like to have hope? Did they forget how to close their eyes and dream? Did they discover that without me they may as well not exist?”

The second season began by answering that question. We find that Powers has settled in Mexico where he considers himself somewhat of an outlaw. He’s taken on the identity of “Steve”. He gets by with cockfights and gambling, that is when he isn’t tapping his best friend Steve’s (Little) credit card to the tune of about $20,000. When Steve finally tracks him down they both consider the credit card charges as “breadcrumbs” Powers was leaving for his friend to come and find him. So Steve, who idolizes Powers, shows up unannounced and gets shot in the leg when Powers mistakes him for a burglar. When Steve complains about the wound Powers reminds him that he’s not the only one suffering. After all, the handgun kicked a little and scratched his hand. That’s the kind of guy Powers is. Steve sticks around and plays sidekick to the crazy Powers. That role had earlier belonged to Aaron (Roy) as a midget who worked with Powers in his cockfighting gig until their prize fighter, Big Red, gets killed. Aaron turns on Powers and strikes out on his own.

Powers ends up joining the local baseball team in order to create some buzz that he still has what it takes to pitch. Of course, his self-centered attitude and antics create more problems for the team. Powers also has a new lady in his life. He meets Vida (Reguera) at a bar where she’s a singer. He ends up caught in a love triangle when the team owner Roger (Rodriguez) falls for the girl. Don Johnson shows up as Powers’s father, and we soon find out exactly where he gets his attitude from. Let’s just say this acorn didn’t fall far from the tree at all.

The third season finds Powers back in the United States and on track for a huge comeback. He’s pitching for the Myrtle Beach Mermen. It doesn’t take long before he’s up to his old politically incorrect antics. This time he has a 1-year-old son. When April just can’t take it anymore, she dumps Toby on Powers and splits. He has to figure out how to be a father. That means getting Stevie back on his team.

Meanwhile he’s being forced to mentor a young Russian prospect named Ivan Dochenko (Barinholtz). The kid’s not playing and considers Powers a has-been, and a destructive rivalry explodes into several episodes. Don Johnson returns as his father, and Lily Tomlin shows up as Mom.

The show is a bit of an enigma to me. There’s no doubt that the writing and performances are absolutely golden. There are more laughs packed into a half hour of this show than most shows see in an entire season. You will find yourself laughing in spite of the total lack of political correctness. It’s great, isn’t it? What confuses me is how they do it. On the surface this should play out for about as long as a mediocre Saturday Night Live skit. There’s not a lot of meat or particularly clever things going on. And yet it’s about as funny as anything I’ve seen in a very long time.

Each episode is presented in its original aspect ratio of 1.78:1. The 1080p image is arrived at with an AVC MPEG-4 codec at an average 20-25 mbps. The picture looks almost too good for a comedy. The Myrtle Beach scenes contain a ton of texture that puts more reality into this image than we might be used to for a comedy show. We’re talking solid colors that jump out at you at times. There’s plenty of surfing going on at the beach. The black levels are solid and display a wonderful range of shadow definition. Close-ups are almost painfully sharp on those faces.

Audio Comentaries that are often as funny as the show.

It’s all in HD

Danny McBride is also a writer and producer on the show. You’d think that it was a one-man effort, but it most certainly is not. McBride’s character would get old fast if not for the solid performances around him. The team here understands quite well how much gold you can mine with the right cast and situations. His racist remarks might just be shocking if not for the mixed ethnic cast that he’s playing to here. It’s like they understand him, and somehow it’s no longer shocking but somehow safe to laugh at, and laugh you will. How he treats his friends and women would be a bore if not for the people who populate these positions in his life. The show’s loaded with “straight men” who make McBride’s performance that much better. There’s certainly a line here and Eastbound And Down dances all over it. “Jumpin’ around like a bunch of child molesters at Chuck E. Cheese.”

Gino Sassani is a member of the Southeastern Film Critic's Association (SEFCA). He is a film and television critic based in Tampa, Florida. He's also the Senior Editor here at Upcomingdiscs. Gino started reviewing films in the early 1990's as a segment of his local television show Focus. He's an award-winning recording artist for Omega Records. Gino is currently working on his 8th album Merchants & Mercenaries. Gino took over Upcomingdiscs Dec 1, 2008. He works out of a home theater he calls The Reel World. Favorite films: The Godfather, The Godfather Part II, The Body Snatcher (Val Lewton film with Karloff and Lugosi, not the pod people film), Unforgiven, Gladiator, The Lion King, Jaws, Son Of Frankenstein, The Good, The Bad And The Ugly, and Monsters, Inc.
Exclusive Interview With David Barrett – Director Of Fire With Fire The Dark Knight Rises (Blu-ray)