Mankind: The Story of All of Us (Blu-ray) 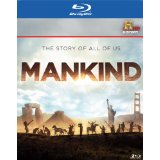 “Amidst the chaos of an unforgiving planet, most species will fail. But for one, all the pieces will fall into place and a set of keys will unlock a path for mankind to triumph. This is our story.”

The only thing missing from that bit of grandiose narration — which opens each episode of this 12-part series — is a Law & Order-style *chung, chung.* Mankind: The Story of All of Us starts with a bang (as in the “Big” one) and proceeds to give us a lively, surprisingly cinematic history lesson.

In putting together this project — a spiritual big brother to History’s America: The Story of Us, which aired in 2010 — the channel sought to bring the story of mankind out of the stuffy classroom and into thrilling life by appealing to modern sensibilities. In other words, this isn’t your grandfather’s historical documentary. Although it often feels like this series should be airing on Spike TV, the hyper-stylized presentation is actually on-brand with History’s current slate, which counts manly titles like Ax Men and Top Shot among its most popular hits.

The three-disc series spans mankind’s beginnings in East Africa’s Great Rift Valley all the way to the 21st century and the speculation that humans will inevitably set foot on Mars. To chronicle everything that came in between, the producers of this series made a canny storytelling decision: they decided to present mankind’s history through the prism of human conflict. As narrator Josh Brolin — a solid, tough-guy choice for such a brawny project — informs us in Ep. 12/“New Frontiers”, “as our numbers grow, so does the scale and reach of human conflict.”

Basically, this allows director Nick Brown (who helmed most of the episodes) and his team to re-stage some of the most famous battles and disasters in the history of the world. Brown does a pretty good job of aping the directorial stylings of, among others, Zach Snyder and Mel Gibson. (And I’m not just saying that because the Spartans’ Battle at Thermopylae, the crucifixion of Jesus Christ and the decline of the Mayan civilization are all dramatized.) The production values are mostly magnificent, especially when you consider this is being done on a basic cable budget.

The series mixes in plenty of science with the action on display to show the evolution of human ingenuity, “a thirst for knowledge and a quest to explore” that makes our species unique on this planet. The constant battles and CGI recreations of historical landmarks are broken up by talking head commentary from celebrities like Dr. Mehmet Oz, chef Anthony Bourdain and NBC anchor Brian Williams, along with a parade of lesser-known (but no less authoritative) historians, professors and scientists. Despite the famous faces, the breakouts were (overly)enthusiastic military experts Mike Loades and Richard “Mack” Machowicz.

After an info dump of an opening episode (“Inventors”), the series settles into a steady rhythm. The story of mankind is told chronologically, which means America doesn’t make an extended appearance until Ep. 7 (“New World.”) Each episode has five chapters, which you can access through the pop-up menu. My favorite installments included the action-packed and sadly Tony Stark-free Ep. 2/“Iron Men”, the impressive cringe-worthiness of Ep. 5/“Plague” (which depicted the massive Bubonic plague), the eye-opening Ep. 8/“Treasure” (I’m a bit embarrassed to admit I didn’t know that African royals sold their own prisoners as slaves before the Europeans turned on them) and Ep. 9/“Revolutions” (the most successful mixture of the show’s action/science formula, depicting both the American Revolution and the Industrial Revolution in England).

I freely admit I’m no historian, but even I can see a good amount of this material is told in an overly heavy-handed way for dramatic effect. (Fun drinking game: take a shot every time Brolin gravely intones that something “will change the lives of every human being on the planet.”) However, the best thing I can say about this show is it entertained me and it made me want to learn more about some of this stuff my own. After all, “the story of mankind is only just beginning.”

Mankind: The Story of All of Us is presented in its original aspect ratio of 1.78:1. The 1080p image is arrived at with an AVC MPEG-4 codec at an average of 22 mbps. As I mentioned before, the production values for this series are quite strong. The series juggles a variety of visual styles — several film stocks, digital grain, computer-generated recreations are employed — to differentiate between a plethora of the planet’s historical periods. The result is impressive, but it also makes it difficult to judge the image quality because colors and contrast are purposely tweaked. I did spot some aliasing that didn’t look entirely intentional.

Since the talking head segments have a consistent look, they serve as a sort of control group. The picture is sharp featuring black levels that are nice and deep. Some of the CGI imagery in the series is stunning, while a few parts look embarrassingly phony. (I’m thinking of man’s first flight attempt in Ep. 4/ “Warriors.”) One consistent part of this video presentation is the remarkable, razor-sharp detail on the close-ups. (Though I bet you’ll wish the picture wasn’t so clear during “Plague.”)

The DTS-HD Master Audio 5.1 track explodes into action more than you’d expect from a historical documentary thanks to the high number of battle sequences. The show’s pulse-pounding score is the perfect complement to the series and also comes through each of the speakers incredibly well. Couple those two things with Brolin’s booming voice, and you’ve got yourself an adrenalized look at history. However, this full-bodied track has more going for it than simply being loud.

There is great immersion throughout the series, starting with the chiseling of pyramids in the first episode to the whooshing of air as the Little Boy atom bomb cuts through the sky. The only minor downside is that there are no subtitles available, which would’ve been helpful for nerds like me who want to know how to spell some of the more exotic names and places mentioned by Brolin.

Additional Footage: (31:21) Rather than giving us something we haven’t seen, this batch of 10 “scenes” is mostly an expansion of material already included in the main presentation. Then again, more info is never a bad thing. The additional footage is presented in HD and is only available on Discs 1 and 2. Features a Play All option.

Is it really possible to condense the entirety of mankind into a 12-part series of hour-long episodes? Of course not! That’s ridiculous!! I’m sure some people will criticize this series for being scattershot (inevitable) and dumbed-down (not entirely unfair). If you’re thinking of skipping a semester of history class in favor of watching this, then you’re going to be a serious trouble. However, I feel the main function of this series was to be entertaining and get a large number of people interested in our past. And on those counts, I believe it succeeded. (But it’s up to you to do your own supplemental research, slacker!)

Though I would’ve liked to have seen some sort of “Making of” documentary that revealed how the filmmakers were able to put out such an impressive-looking product, Mankind: The Story of All of Us should at least be commended for bringing some history back to History. (Current home of historical programming like Big Shrimpin’ and UFO Hunters.)

12 Days Of Christmas Giveaways – Day 2: History Of The World In 3D From A&E/History For One Night