Men of a Certain Age: The Complete Second Season 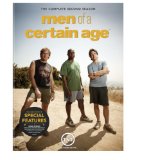 TNT prides itself on “knowing drama,” but as far as I’m concerned the network’s best series was also its most woefully underappreciated. It didn’t have any cops, lawyers or doctors. It wasn’t as light or slick as some of the channel’s hits like The Closer (cops), Franklin & Bash (lawyers) and Rizzoli & Isles (a cop AND a doctor; don’t make me guess which is which). It didn’t have aliens (Falling Skies) or impossibly charismatic crooks (Leverage). Instead, Men of a Certain Age dealt with a topic that is much less fun to think about, yet happens to 100 percent of us: getting older.

I realize a show that deals honestly with aging sounds about as much fun as a colonoscopy. (Coincidentally, the Men embark on a weekend colonoscopy outing in Ep. 6/ “Let the Sunshine In.”) Men of a Certain Age simultaneously celebrates life’s small victories while chronicling its many indignities. Thankfully, the show’s excellent acting, writing and directing keep the material entertaining and genuine.

In case you’ve never seen the show, Men of a Certain Age follows three college buddies who have remained friends into middle age. Joe Tranelli (Ray Romano) is a divorced party store owner with two teenage kids and a gambling addiction he’s constantly battling. Owen Thoreau (Andre Braugher) is the only married man in the group and is constantly at odds with his overbearing former-NBA player-turned-car-salesman father. Terry Elliott (Scott Bakula) is the charming, unreliable actor who is still handsome enough to bed women half his age. Season 2 picks up with Joe and Terry creeping toward their 50th birthdays. Aspiring pro golfer Joe is trying to qualify for the Champions Tour, while Terry finds steady work selling cars for Owen, who is now in charge of his father’s dealership.

Having Terry work for Owen was a smart move because — other than their frequent meet-ups at a diner or morning hikes — the Men tend to splinter off and star in their own storylines. (Romano, Braugher and Bakula have each previously carried their own TV shows, so the separate storylines still work.) Still, it’s no accident the season’s best episodes (the aforementioned “Let the Sunshine In” and Ep. 9/“A League of Their Owen” with its surprisingly high stakes softball game) feature all three of the Men in the same place.

Romano co-created the show with Everybody Loves Raymond producer Mike Royce. The actor/comic — with his distinctive, nasally voice — brings a lot of the same whininess he brought to his blockbuster sitcom. Here, he calibrates that whininess to subtle and terrific dramatic effect as Romano plays a guy trying to start a scary new part of his life (dating; a career as a pro golfer) without having a single clue how to do so. Bakula (Quantum Leap) is equally excellent as the easygoing screw-up who can’t stay out of his own way. Terry proves to be incredibly adept at selling cars, so he naturally decides to jeopardize his professional and personal life when things gets too comfortable. Bakula brings a TV pro’s likability and maturity to an immature character.

The best of the bunch is Braugher, who is one of the best television actors of the past 20 years. (He’s even kicking butt on the recently-canceled Last Resort.) Braugher has always been an imposing screen presence and he’s added a good amount of physical heft since his Homicide: Life on the Street days. In this show, he’s asked to play a man who is often made to feel very small — whether it’s by his stressful job or by his domineering father, Owen Sr. (played fantastically by Richard Gant) — and he does so brilliantly. In fact, the second season of Men is overflowing with excellent supporting performances. In addition to Gant, Melinda McGraw is radiant as Terry’s age-appropriate love interest Erin, Braeden Lemasters is appropriately jittery as Joe’s well-meaning, anxiety-ridden son Albert, and Brian White is impressively cocky as Owen’s antagonistic best salesman Marcus. That’s just to name of few; there’s plenty of great work where that came from.

The second season of Men of a Certain Age aired in two six-episode halves starting in late 2010 before wrapping up in the summer of 2011. So I was pleasantly surprised to hear about this DVD release a year and a half later. The show was canceled with a few storylines in the air — Joe’s prospects as a pro golfer, Terry contemplating another career change — but the end of season 2 works as an adequate series finale. (Then again, fans weren’t exactly given a choice.) It’s much too late now, but I still wish TNT had put more promotional muscle behind this underrated (in every sense of the word) series that reminds us getting older and growing up don’t necessarily go hand-in-hand.