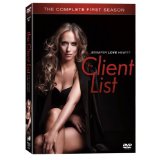 Here’s how hot Jennifer Love Hewitt is in The Client List, Lifetime’s breezy, sexy hit dramedy. My wise, eternally-patient girlfriend and I watch the show together, and she doesn’t even get jealous or make any sort of catty remarks at our TV. Instead, she figuratively tips her cap to Hewitt’s hotness the same way a golfer might compliment an opponent for making an impossible shot. (Game recognizes game, I suppose.)

The Client List stars Hewitt as Riley Parks, a Texas housewife who is abandoned by her husband Kyle (Brian Hallisay) during tough financial times. Riley begins working as a massage therapist at an upscale day spa called The Rub, owned by the savvy Georgia Cummings (Loretta Devine). Unfortunately, no one told Riley certain clients expect, ahem, “extras” with their massages. (Maybe Riley’s first clue should’ve been that her boss’s name is “Georgia Cummings.”) Faced with having to support two children, Riley eventually decides to, um, hand out extras.

The show is a spinoff of the 2010 Lifetime TV movie of the same name, which itself was loosely based on a 2004 prostitution scandal in Odessa, Texas. Riley’s predicament is somewhat similar to that of Nancy Botwin from Weeds, another suddenly single mom who turns to a relatively harmless criminal activity (neither of these ladies is the next Walter White, though Nancy came close). The “relatively harmless” distinction is an important one since producers want to keep the tone light and audience’s rooting for their heroine. Like Nancy, Riley discovers she’s good at — and actually (gasp!) likes — her newfound career. Still, Riley decides to keep what she’s doing a secret from her old-fashioned mom Linette (Cybill Shepherd), devoted best friend Lacy (Rebecca Field) and Kyle’s kind, helpful brother Evan (Colin Egglesfield) who is clearly in love with Riley. (Hewitt and Shepherd are the only cast members to make the jump from the TV movie to the series.)

Hewitt — who has been a TV star for a surprisingly long time when you consider how young she is — remains an easy, appealing presence on the small screen. No one would argue this is the most challenging material in the world, but Hewitt’s star quality keeps you interested in the fluffy, predictable proceedings. (It becomes obvious early on that jerky Kyle is going to pop up again at the worst possible time.) Though Shepherd (a big TV star in her own right) is underused except for Ep. 5/ “Try, Try Again”, Hewitt receives solid support from the maternal Devine. Riley is also amusingly antagonized by former high school rival Taylor Berkhalter (recurring guest Elisabeth Rohm) and jealous fellow massage therapist Selena (Alicia Lagano, nicely bringing some sour to balance out Hewitt’s sweetness), who helped Riley get her job at The Rub in the first place.

I’m not trying to disrespect the show’s cast and crew, but let’s not kid ourselves: The Client List is really an elaborate excuse/star vehicle to show off the hotness of Jennifer Love Hewitt, who is also a producer and a director on the series. And in that regard, the show is wildly successful. Riley appears in a dizzying array of skimpy lingerie for her clients.  However, creator Suzanne Martin and her team are smart enough to remember Lifetime’s audience, so a stunningly high percentage of Riley’s clients are relatively young guys in great shape. (We never see any old, fat gross guys enlist Riley’s special talents.)

This is also basic cable, so the steamiest things ever get in terms of sexual content is a little soft lighting, some hands on an upper thigh, and funny reaction shots of satisfied guys. The Client List definitely soft pedals Riley’s interactions with her guys, having her serve as more of a counselor than a straight-up prostitute. Other than a brief appearance from Betty White in the season finale, the show isn’t at all reliant on big guest stars; fortunately, Hewitt is more than capable of carrying the load. (Hewitt’s cleavage should also get a producing credit.) Though I think Ep. 9/ “Acting Up” would’ve made for a better season finale than the one we actually got, I’m still interested in finding out where the show goes in season 2, which premieres March 10.

In fact, my least favorite things about this DVD set — which includes about 20 inessential deleted scenes and some standard outtakes — have little to do with the show itself. I hate, hate, HATE how the three discs are stacked on top of one another and held in place by the same hub. Besides covering up two scorching pictures of Hewitt at all times, there’s a reason we don’t stack unprotected discs on top of each other. Finally, it’s a crying shame this set wasn’t released on Blu-ray. I don’t think I’m breaking any news when I say The Client List isn’t the next Great American Drama; this sexy soap — along with its stunning star — should absolutely be seen in all its high definition glory.