Posted in: Disc Reviews by Jeremy Butler on March 26th, 2013 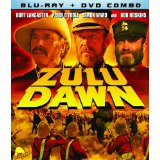 I tend to shy away from films that have come out before I was born. It’s not a rule, just a habit. The reason for that being because not being from the generation that movie was produced in, I fear that there will be a lot of cultural reference that I will be unfamiliar with and I will have to Wikipedia them all. I also feel that because I am from a different era I am not qualified to render a sound opinion of an older film, because I may judge it too harshly due to my growing up within a time of special effect advancement. Of course I am well aware that this aversion causes me to miss out on quality films like Raiders of the Lost Ark, Apocalypse Now, and as it turns out, Zulu Dawn. Thank goodness for this job for introducing me to films I wouldn’t normally see of my own volition.

Zulu Dawn is a war film covering the Battle of Isandlwana, the first major encounter in the Anglo-Zulu War between the British Empire and Zulu Kingdom in 1879. The film is told mainly from the perspective of the British soldiers and features Hollywood household names Burt Lancaster, Peter O’Toole, Simon Ward, and Bob Hoskins on that side. The film starts off with Lord Chelmsford (Burt Lancaster, Lawrence of Arabia), a commander of British forces stationed in South Africa who is eager for advancement, and Sir Henry Bartle Frere (John Mills, Ryan’s Daughter), the High Commissioner of South Africa issuing a ultimatum to King of the Zulu Empire, King Cetshwayo: dissolve his empire or face the British forces that were looking to expand the ever-growing industrial economy. The King refuses and rallies his people to prepare for war.

As Chelmsford puts together the army for the invasion he is joined by Colonel Durnford (Burt Lancaster, Field of Dreams), a commander of a battalion of native soldiers. Unlike Chelmsford, Durnford has a closer relationship with the men under his command and cares more about their well-being. Also joining the fight is William Vereker (Simon Ward, The Tudors) a young man from a prominent family eager for war. Vereker, given his abilities, is quickly given an officer position but becomes disillusioned soon after the invasion after witnessing the torturous treatment of Zulu warriors by British soldiers.

I have been told that a greater emphasis was placed on an actor’s ability in the past than there is now; I can get behind that statement (with a few exceptions of course:; Joseph Gordon-Levitt, Jennifer Lawrence, a few others). Much of the focus of the film was on Ward’s character, and he carried the film for me; the film was essentially about his struggle of watching men killed and mistreated and being unable to do anything about it. O’Toole is comfortable in the role of a cocky commander who doesn’t see the Zulu as a threat and ignores precautions necessary to protect against attack, making it very easy to dislike his character.

Zulu Dawn is presented in the aspect ratio of 2.35:1. The 1080p image is arrived at with an AVC MPEG 4 codec at an average of 15 mbps. Not a good transfer in my opinion. The picture quality is not as sharp as I expected and faint scratches become visible just before the hour mark. In addition to the scratches, noticeable discoloration can be seen to the left of the screen. The film maintains some of its original grain, most prominently seen on the white helmets of the British soldiers. The warm color palette doesn’t blend well, and a faint digital noise can be heard throughout the duration. The only instance where the picture has plenty of detail is during close-ups. During these scenes the blood, dirt, and grass is at its best quality.

The sound quality of the Dolby Digital 2.0 track is very impressive. The dialog is clear and concise, and the sounds of the rifle firing, horn blows, and the score blend well without stealing focus from one another. The audio track doesn’t provide an immersive feeling, but is still an impressive track. The problem is that it’s not an uncompressed track and not really up to Blu-ray standards.

The History of The Zulu Wars (25:34): An in-depth retelling of the Anglo-Zulu War from Ian Knight, Author of “Zulu Rising – The Epic Story of Isandlwana and Rorke’s Drift; how the war was started, the weaponry and fighting styles of both sides, featuring clips from the film to illustrate.

Recreating the War (20:19): A featurette with Midge Carter, the Historical Advisor on the film talking about how he got involved with the project and the process of ensuring that the film remained historically accurate.

A Visit to the Battlefield (16:47): Ian Knight takes you on a tour of site where the historic battle took place, showing where certain historical scenes in movie took place in reality.

Theatrical Trailer (3:00): A three minute trailer for the movie, not really necessary to watch considering you are in possession of the actual movie.

Outtakes (12:14): Didn’t really expect to find a blooper reel on this type of film; worth a peek.

Films with historical importance have a difficult time keeping my attention, but Zulu Dawn did not have that issue as I stayed attentive and interested for the duration. Though the video quality does diminish slightly, the overall story holds its appeal. One of the finer points that I will take away from this movie is the lesson of never underestimating your enemies, because it may mean your downfall.

Jeremy Butler is a film school graduate of the International Academy of Design and Technology. He is been writing for Upcomingdiscs since 2012; however, movies have played a big part of his life for much longer. Favorite genres include horror, science fiction/fantasy, and comedy. Favorite movies are V for Vendetta, Boondocks Saints, Kiss Kiss Bang Bang, and The Godfather.
Killing Them Softly Jersey Shore – The Uncensored Final Season