Posted in: Disc Reviews by William O'Donnell on June 9th, 2013 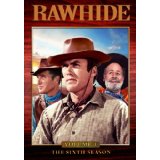 For 8 long seasons Rawhide followed the adventures of a cattle drive. Season 6 was separated into two releases. Here we shall look at what Part One has to offer. Feel free to browse previous releases covered by Gino on this same site: http://upcomingdiscs.com/?s=rawhide

Clint Eastwood got his first major role playing foreman Rowdy Yates for the entire run of this series. By the sixth season, Eastwood seems to be a far more comfortable and confident actor than what we saw in earlier seasons. A real white hat, Yates is often the voice of reason when his Trail boss (played by Eric Fleming) has his doubts. Although sometimes he needs a boost as well, and that comes in the form of support from their ever-lovin’ cook Wishbone (played by Paul Brineger).

As the seasons wore on, the adventures became a bit stranger for these cowboys driving 3,000 head of cattle. While most of the tales are about the hardships of such an enormous cattle drive, and the tough decisions that naturally come with such a task, the two-fisted antics are sometimes met with peculiar situations such as one episode where a rogue lion is prowling around (yeah read that right, a lion) or when one of their crew is suddenly attended to by a Geisha. Not exactly the sort of situations that can be resolved with some stern talkin’ and a couple of punches thrown (although 80% of this show is solved thusly).

Fullscreen in its original black and white presentation. While not quite as crisp as other CBS TV releases (whom I have always said have done an outstanding job transferring older shows), this is still a rather solid picture quality. The black levels hold up making for a clean picture for the majority.

English Mono. This type of track is par for the course when it comes to transfers shows that are this old. All the hoots and hollars by the cowboys are clear as they could be.

The thought of a show about a cattle drive is exhausting to think about, which makes it hard to imagine such a story could be told for as many seasons as Rawhide had. Yet here we are, still tuning in (relatively speaking) and finding some amusement in it, even though it can be a bit more tedious than one wants from an hour-long program.