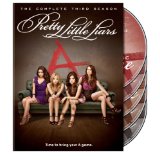 And there are a lot of secrets to be found on the ABC Family show Pretty Little Liars. It seems that Alison (Pieterse) was murdered in the small Pennsylvania town of Rosewood. She was the “queen bee” of a small clique of girls. She was fond of manipulating those around her, and it seems her head games have finally caught up with her. That leaves her four close friends behind to get on with their lives. That’s going to be hard now. Allison’s body has finally been discovered, the missing-person investigation is now a homicide investigation, and the four little busy bees are at the heart of the storm. Then there’s the anonymous “A” who has begun to send them messages that indicates she/he knows many of their most closely guarded secrets. “A” torments them with her/his intimate knowledge not only of the past but what the girls are up to even now. It’s obvious that “A” is close and keeping tabs on the girls. Alison may be dead, but it’s “A” who is manipulating them now.

In the second season we pretty much found out that A was Mona Vanderwaal, played by Janel Parrish. She had a breakdown and begins the season in Rosewood’s mental institution. It appears the girls are finally safe from the fiendish pranks. But, of course, there would be no third season if that were true.

This season we discover that Mona was just the tip of a huge Titanic-style iceberg. There really is no “A”. Now it’s the “A-Team”, and George Peppard is nowhere to be found. This A-Team is bent on some kind of revenge, and the teenage pranks are over. Give the show runners credit for amping up the stakes in the third year. Instead of pranks people are getting killed, and it started in season 2 with the murder of Emily’s girlfriend. This time the cops are looking at the Liars pretty hard, and the team is leaving breadcrumbs right to their door. Their lives are now in constant peril, and the A-Team is playing for keeps.

The season takes advantage of the escalation and the multiple villains by playing a game of “Who is on the A-Team”? No one is off limits. We’re talking family members, boyfriends, or the cops themselves. A’s reach appears to be everywhere, and even the Liars themselves can’t trust each other.

The season includes a killer (literally) Halloween episode on a haunted party train. The season particularly gives Troian Bellisario a lot to work with as she shows herself to be the best of the four leads. By the end of the season she loses her sanity a bit, and her torture at the hands of Mona lasts most of the last half of the season. By the end she’ll end up putting in some time at the mental ward. I can certainly appreciate the nuanced performance even if the show isn’t really targeted to me.

As for the main cast, here’s the show’s website description:

Aria Montgomery (Lucy Hale) is back in Rosewood after being in Iceland for a year. It might as well have been a lifetime, because Aria suddenly feels like an outsider in her hometown. She’s reconnecting with her old friends, but only time will tell if their secrets will bond them together or tear them apart. Luckily, Aria has a great relationship with her mom, but even her near-perfect family has its secrets. Aria has one of her own that’s too dangerous to share with anyone – so how can it be that “A” is already on to her?

Hanna Marin (Ashley Benson) goes after what she wants. The more forbidden it is, the better — whether it’s a pair of designer sunglasses, junk food, or her chastity-pledging boyfriend’s virtue. Rosewood High’s “It” girl is an expert at creating the façade of the perfect life. What would people say if they knew about her run-in with the law? Today Hanna rules the school, but “A’s” mysterious messages are unsettling. How easy would it be to topple Hanna’s reign, and just how far would she go to save it?

A classic overachiever, Spencer Hastings (Troian Bellisario) balances school, a high-powered internship, charity work, the field hockey team, and maintaining uber-popularity status — all without breaking a sweat. This is the girl who could stand up to Alison when no one else would. But when she and her friends begin receiving mysterious messages from “A,” even the calm, cool and collected Spencer starts to show a little strain. And when she develops a forbidden crush on her sister’s fiancé, you have to wonder if Spencer can keep it together.

Emily Fields’ (Shay Mitchell) life is picture-perfect. It should be. After all, her mom makes sure everything in their world is just so. So why does Emily dream of getting out of Rosewood? She’s a star athlete with a popular boyfriend, but Emily feels like an outsider. Maybe that’s why she’s drawn to Maya, the new girl in town. They become fast friends, but Emily’s feelings are a little more complicated than simple friendship. The question is, how far will she dare take them? Or will she have to hide them, too? As “A” points out, it’s not the only secret Emily is hiding.

The show is based on a series of books by Sara Shepard and targeted at teen girls. Obviously I am not in the target audience and have not read any of the books. It’s obvious that the show makes a connection with teen girls. I’m just not sure I understand how this show fits within the template of ABC Family.

I don’t really have a problem with most of the morality breakdowns here. I’ve enjoyed more than my fair share of television bad examples from Tony Soprano to Sid the Snitch on Hill Street Blues. So, I won’t join the popular rail against the example these girls set. However, for a show targeted as a family show, I have a problem with some of the situations presented under that context. Aria is having a romantic relationship with her English teacher, and the show presents this relationship as brave and fighting for true love. There’s nothing courageous or true about that situation. It would be different if this was another kind of show or the scripts were honest about the issues here. And while he’s not teaching any longer, I’m not sure that settles the moral question. David Chase never tried to convince us that Tony was honorable or a nice guy. It’s the kind of thing any parent should know before you consider picking this one up for your teen daughter.

The story is an ongoing soap opera about these four girls and the secrets they hide even from each other. There are some nice supporting actors and characters here to keep the whole thing interesting. The actresses who play the liars are all quite good performers, and there’s no question the characters are believable, particularly if you’re in that target audience. Production values are also quite high. The stories are a bit tedious, but I’m not a teen girl, so what do I know?

Each episode is presented in its original broadcast aspect ratio of 1.78:1. The image is pretty solid. Colors are quite bright. These are high school girls, and they’re going to have a colorful wardrobe. The picture is quite natural-looking, for the most part. There are five episodes on most discs, so compression is going to be an issue, particularly for black levels.

The Dolby Digital 5.1 track does everything you would expect. There are a lot of ballad montages here, and the reproduction on the music is both dynamic and crisp. Dialog always comes through. You won’t find a very aggressive surround use here, but I think that’s to be expected.

Deleted Scenes on most episodes.

Pretty Little Liars And The A Network: (15:11) This is the behind-the-scenes stuff. The cast and crew speculate about who might be on the A Team.

Webisodes: There are four 1-2 minute pieces that appeared on the net mostly as teasers. There is no play-all.

The next season will see the show spin off to another series. Caleb Rivers who plays Tyler will get to lead that series. The guys do get a bit more to do this season, and it made it a little easier to deal with from my perspective. While I know they aren’t targeting my demographic, I still appreciate the high production values and pretty good cast. For the true fans they will be delighted that soon there will be twice as much to like about this universe. It’s a safe bet that “it’s not over”.

Gino Sassani is a member of the Southeastern Film Critic's Association (SEFCA). He is a film and television critic based in Tampa, Florida. He's also the Senior Editor here at Upcomingdiscs. Gino started reviewing films in the early 1990's as a segment of his local television show Focus. He's an award-winning recording artist for Omega Records. Gino is currently working on his 8th album Merchants & Mercenaries. Gino took over Upcomingdiscs Dec 1, 2008. He works out of a home theater he calls The Reel World. Favorite films: The Godfather, The Godfather Part II, The Body Snatcher (Val Lewton film with Karloff and Lugosi, not the pod people film), Unforgiven, Gladiator, The Lion King, Jaws, Son Of Frankenstein, The Good, The Bad And The Ugly, and Monsters, Inc.
This Girl Is Badass (Blu-ray) Oz the Great and Powerful (Blu-ray)