This Girl Is Badass (Blu-ray)

Posted in: Disc Reviews by Brent Lorentson on June 11th, 2013 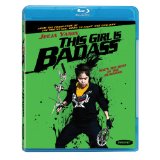 When it comes to martial artists out of Thailand, the big go-to name people seem to know is Tony Jaa (Ong-Bak).  But Thailand has another martial arts star, and after finishing This Girl is Badass I’m convinced Jeeja Yanin is going to be the bigger star.  Most may recognize Jeeja from the 2008 film Chocolate; after the last thirty minutes of that film I was ready to see her in more action.  Though she’s had other titles released since Chocolate, This Girl is Badass gets to be the follow-up film since her 2008 release.

Now, I don’t know how many of you remember the bike messenger flick Premium Rush, but the plot for that runs very closely to the plot for This Girl is Badass.  Jeeja plays a bike messenger, Jukkalan, who also delivers packages for two rivaling crime bosses to make some extra cash. Once she gets found out, she gets caught in the middle of this smuggling war.  What I wasn’t ready for was for this to be a comedy that reminded me of the old Zucker brothers and Mel Brooks’s films (only not nearly as good).  The crime bosses are good and hard to take seriously, one being an obese man with a very effeminate voice, the other an older man with a foot fetish.

The humor may not translate too well; some may find it too childish and goofy.  For instance there is a gimmick where every time we see Jukkalan’s boss he is dressed in some ridiculous outfit.  For added goofy pleasure there are Thai fighting midgets as well as midget vendors with anger issues.  It’s not intended to be offensive but simply unexpected and playful.

As for the fight scenes and stunts, well, if you thought Premium Rush had cool stunt performances, hold onto your handle bars, because this movie delivers, but in too-small doses.  Seeing Jeeja manipulate her bike not just while delivering packages, but as a weapon during a fight, is a spectacle to be enjoyed.  The ease at which she can flip the bike, while turning and twisting her body to complete a complicated fighting move, is no different than the elegance of watching a dancer performing a piece of ballet.  I can’t say that at any time does she have a fight that equals what we’ve seen her do before, but seeing a sweet funny side to her shows how much charm and talent she has.

Director, co-writer, and co-star Phetthai Wonghamlao does what he can, but I can’t help but feel this could have and should have been bigger and better.  This did deliver more laughs than expected, and when there was a fight scene it was awesome, but it felt like a step back for Yamin in some respects.  With the title and the cover art, I feel a lot of people are going to pick this up and be disappointed, but really there isn’t exactly a demand for slapstick Thai comedy in the states.

This Girl Is Badass is presented in an aspect ratio of 1.78:1.  The 1080p image is arrived at with an AVC MPEG-4 codec at an average of 24 MBPS.  It doesn’t take long to look at this film to notice the low-quality look to the film that may or may not have intended to parody the low-budget action films they seem to be mocking.  There are plenty of issues with colors being blown out, almost as though the camera guy seemed to forget to color balance the shot.  There were also some aliasing issues, but really it didn’t distract too much from the action.  As for the few and far between night shots, the blacks have very little separation. When we see Jukkalan deliver packages at one moment in the film to a dark (possibly abandoned), building, suddenly on the inside this guy appears and grabs the package.  We can somewhat see him, but no clue what, if anything is in the building.

The DTS-HD Master Audio 5.1 default track is in Thai, but you also have the option to listen to the film dubbed.  Taking into account that this was meant to be an over-the-top comedy, the action scenes are filled with exaggerated impacts and the soundtrack is a bit overpowering and simply at times downright goofy.  Considering I viewed this in the Thai track and had subtitles, I had no issues trying to pay attention to the dialog.  The translation seemed to make sense, perhaps not using literal translations but close enough to what we’re reading.

The Making of This Girl Is Badass: (7:03) A brief collection of interviews with the cast and director of the film.  Each spends a little bit of time discussing their roles and about the project.

Behind the Scenes: (1:57) A short montage of footage collected during the production of the film.  With these kind of martial arts films I always wish they had more than what they offer.

Overall I’m still not sure how I feel about this; it’s fun, stupid, and awesome, but not enough of anything to lean me to say this is a must-see. Though it had some cool fight scenes, the most memorable moment involves a villain singing his own theme music.  Yeah, it’s funny, but that’s about as far as I’ll go.

Brent Lorentson is a horror writer and film critic based out of Tampa, Florida. With a BA in Digital Film, he co-wrote and co-directed Scavenger Hunt. His short stories have appeared in various horror anthologies. In 2019 his short script Fertile Blood will be a part of the anthology horror film Slumber Party. He is currently working on his first novel A Dark and Secret Place set to be released in late 2019. Favorite Films: Taxi Driver, Fight Club, I Saw the Devil, The Wild Bunch, Dawn of the Dead, A Clockwork Orange, Pulp Fiction, Heathers, The Monster Squad, and High Fidelity.
The Philadelphia Experiment (2012) (Blu-ray) Pretty Little Liars: The Complete Third Season