Bullet To The Head (Blu-ray) 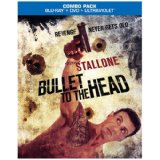 It’s hard to imagine that Sylvester Stallone and Walter Hill never crossed paths for an action movie in the early days of their careers. Both have established themselves as staples in the action movie genre, and they dominated the 1970’s and 1980’s. It seems like a dream come true that the actor and director have finally joined forces. Unfortunately, some dreams are actually nightmares, and if Bullet To The Head is any indication, the two stars would have been better off had they remained unaligned.

The story is based on the French graphic novel Du Plomb Dans La Tete by Alexis Nolent. I have never seen the book, so it would not be possible for me to compare the two. Here the story involves hit man James Bobo (Stallone). He’s on a hit with his partner Louis (Seda). Things go smoothly until James decides not to kill a hooker witness. Is he going soft? Not really. It turns out the two have been set up by their boss Marcus Baptiste (Slater) who has sent another killer, Keegan (Momoa) to get rid of the team. James gets away, and now he wants to find out who set him up and killed his partner.

Enter Detective Taylor Kwan (Kang). He’s a detective out of his jurisdiction in Crescent City. His case involves the guy James hit that night. With Louis’s body arriving the same night, he puts two and two together and seeks out James. He decides they both will be looking for the same guys, and after some uneasy conversations the two come together to track down Baptiste and anyone else who happens to be in the way. Of course, their styles, methods, and motives clash, leading to a final smackdown between James and Keegan.

It’s almost impossible to believe that this is the same director who brought us the 48 Hours films. Walter Hill knew more than just action. He was great at character chemistry, and that’s what makes this film so impossible to figure out. There is absolutely zero chemistry between Sly and Kang. I never thought I would write this line in a review, but Sly out-acts Kang so badly that it’s almost too painful to watch. Stallone delivers a pretty compelling performance here, and this could have been a good film. Kang is absolutely horrible. He delivers his line in a monotone fashion with no passion or feeling whatsoever. It doesn’t help that the film has some awkward dialog to begin with. Combine the two issues, and it’s about as fatal a flaw as a film like this can have.

I was so looking forward to this teaming. But this is not just a case of overly high expectations. I wasn’t looking for anything but a good time and a little adrenaline rush. Kang’s awful performance wouldn’t even allow me that much. The supporting characters are, for the most part, throwaway roles that never really amount to much. Even Slater appears to be hamming it up so much that he’s forgotten to throw in a real performance. Adewale Akinnuoye-Agbaje is another actor I’ve come to expect strong performances from. Don’t look for one here. He’s a one-note bad guy who never really fits into the plot of the film. Hill gives these guys little motivation and throws them away without a second thought. I’m a Jason Momoa fan since his days on Stargate: Atlantis. He has a few good moments when it appears he’s going to break out, but it never happens. When he encounters Stallone, we expect some wonderful moments but only get a very staged-looking fight that ends in a very unsatisfying way.

Bullet To The Head is presented in its original aspect ratio of 1.85:1. The 1080p image is arrived at with an AVC MPEG-4 codec at an average 30 mbps. This high-definition image presentation is quite dark. It relies on pretty solid black levels with equally solid shadow definition. Most of this film takes place in the seedy shadows and without these qualities could have easily become a visual muddy bust. The best thing that Hill does in this film is create atmosphere and the image supports that effort completely.

The DTS-HD Master Audio 5.1 is actually pretty impressive. The sub gets plenty of action in the explosive scenes. Even the dialog is pretty dynamic. Sly’s voice cuts through with its rather unique bass that makes it sound full and yet crystal clear. The score even gets into the surround business with some sweeping audio effects that appear to surround the viewer.

Mayhem, Inc: (9:21) This behind-the-scenes feature focuses, of course, on the action. You get a good look at the stunts and effects.

There were obviously more than a few problems with the script. Writer Allesandro Camon struggled with the original material, to be sure. Maybe something got lost in the translation. It’s quite clear he never understood his characters and was often at a loss as to who they were. Stallone ends up delivering a lot of narration which appears to have been hastily added to cover up some of the issues. This is not good narration. There was apparently a need to have him explain much of what we’re seeing, never a good sign. The only upside to the film is Stallone himself. He’s as good as the film allows. His voice has aged like a fine wine. He has just the right rumble to give him a wonderfully sub-woofer-friendly diction. Yeah, I know. That’s reaching to find something good, isn’t it? Just so you don’t find yourself reaching into your pocket for ten bucks to get in. Wait for the video and plan on a rainy night. You’re bored anyway, right? I always thought that pairing Stallone and Walter Hill would be such luck. It was. “It’s bad luck.”

Gino Sassani is a member of the Southeastern Film Critic's Association (SEFCA). He is a film and television critic based in Tampa, Florida. He's also the Senior Editor here at Upcomingdiscs. Gino started reviewing films in the early 1990's as a segment of his local television show Focus. He's an award-winning recording artist for Omega Records. Gino is currently working on his 8th album Merchants & Mercenaries. Gino took over Upcomingdiscs Dec 1, 2008. He works out of a home theater he calls The Reel World. Favorite films: The Godfather, The Godfather Part II, The Body Snatcher (Val Lewton film with Karloff and Lugosi, not the pod people film), Unforgiven, Gladiator, The Lion King, Jaws, Son Of Frankenstein, The Good, The Bad And The Ugly, and Monsters, Inc.
Blood and Sand (Blu-ray) 42 (Blu-ray)