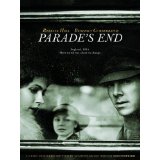 “It’s not a good thing to find oneself living by an outmoded code of conduct. People take you to be a fool.”

Christopher Tietjens, the furiously principled Englishman at the center of this early 20th century drama, is simultaneously a man ahead of his time and part of a dying breed of gentleman. The most frustrating part of Christopher’s predicament is that he also has enough intelligence and self-awareness to realize exactly how out of place his behavior is.

Parade’s End is based on four novels by Ford Madox Ford published between 1924 and 1928. The story has been adapted by renowned British playwright Tom Stoppard (also an Oscar winner for his Shakespeare in Love screenplay) into a five-part miniseries co-produced by BBC and HBO that originally aired across the pond last year.

When we meet Christopher Tietjens (Benedict Cumberbatch) in 1908, he’s about to marry bratty socialite Sylvia Satterthwaite (Rebecca Hall) despite the strong possibility that the baby she’s expecting is not his. His commitment to honor is as deeply rooted as the majestic cedar tree that looms over Groby, Christopher’s palatial childhood home. The story picks up three years later with Sylvia flamboyantly carrying on an affair outside her marriage, and Christopher resigning himself to his social status as a cuckold. Christopher would rather look like a fool than a cad who ran out on his obligation; meanwhile, Sylvia is determined to get a rise out of her frustratingly honorable husband. After all, “There’s no point in a fling if one’s husband doesn’t notice.”

It’s around this time Christopher crosses path with Valentine Wannop (Adelaide Clemens), an idealistic young suffragette protesting against the rich upper class Christopher belongs to. (She has no way of knowing he actually supports her egalitarian ideas that all people deserve equal rights and opportunities.) Christopher and Valentine are drawn to each other, but he refuses to consummate their attraction because of his commitment to Sylvia, and he eventually enlists in the military.

A big part of the reason Parade’s End works is because the performances are uniformly excellent. After playing a villain in a big summer movie and netting a pivotal role in the upcoming Hobbit sequel, Benedict Cumberbatch is certainly an actor on the rise. However, his Emmy-nominated performance as Christopher is much closer to the sort of work that has earned the Sherlock actor a massive following. In other words, the cult of “Benny Batch” is going to swoon over their guy in this miniseries. The actor’s rich baritone is a good match for Christopher, who simply appears manlier than everyone on screen due to his unbreakable resolve. Cumberbatch’s inherently powerful presence is also an important asset, given that Christopher is often made to feel very small; the actor keeps him from being pathetic. He is matched by both his female co-stars. Clemens is a spunky, fresh-faced presence as Valentine. She brings substance to a role that might’ve come off as lightweight in the hands of lesser performer. Meanwhile, Hall adds the right mix of sadness and bitterness to lines like, “I often want to kill him just to see if there’s any blood in him.” The actress does great work with a character that could’ve easily been a one-dimensional villain. Sylvia, after all, is the kind of person who steals the spotlight at somebody else’s funeral.

And that brings us to the real star of the show (sorry, Benny Batch fans): Tom Stoppard’s Emmy-nominated teleplay. This is a character-driven story all the way; the “action” mostly consists of trench warfare that doesn’t occur until Part Five. More so than the deliciously rich language on display — “Come to the fire and tell me why you won’t talk with me” — the greatest achievement here is how each of the main characters if a fully-formed person. The tragedy of Christopher is how his boneheaded(?) commitment to expiring traditions is also the very thing that makes him extraordinary to the people around him. It’s also in the writing that Sylvia goes from cruel troublemaker to a somewhat tragic figure; the woman drove herself batty trying to live up to Christopher’s impossible moral standard. (Sylvia’s level of commitment to her husband, revealed in Part Four, is genuinely shocking yet entirely logical.) Valentine, despite the advantage of political righteousness on her side, is also not infallible. We know she’s right about women having the right to vote, but she’s also shown to be surprisingly naïve in other areas of her life. I do wish the script had taken a bit more time to flesh out the long-lasting connection between Christopher and Valentine; as it stands, it seems like he went gaga for the first attractive girl who wasn’t his horrible wife. (Then again, maybe that’s all he needed.)

I also felt like too many of the supporting players got the short end of the storytelling stick. Only Anne-Marie Duff’s trapped housewife-turned-snob Edith Duchemin, and Stephen Graham’s poet-turned-upscale gentleman Vincent Macmaster got discernible arcs. The cast features other talented players — Rupert Everett as Christopher’s older brother, Jack Huston as one of Sylvia’s lovers, Miranda Richardson as Valentine’s mom, and Janet McTeer as Sylvia’s mom — who were ultimately overqualified for their roles. Rufus Sewell also pops up as an unstable vicar, but his minimal screen time works perfectly because his character is absolutely cuckoo.

The entire miniseries is directed by Susanna White (Generation Kill, Bleak House), who does a wonderful job transporting the viewer to this time period. (I was especially impressed by the otherworldly look she brought to the WWI battlefields.) The repeated use of mirrors — some of which are cracked or resemble prisms — was a bit distracting. Or maybe it just seems that way when you watch these five episodes back-to-back.

If there’s a bit of a slow patch, it’s in Part Four, where Valentine is mostly absent and much of the time is spent following Sylvia’s efforts to see Christopher at his base camp. (Yet even this episode features the explosive moment between Sylvia and Christopher I mentioned earlier.) The relative lightness of Parts 1 and 2 is mostly gone by the end of Part 3, which features a few crucial deaths. Part 5 has the most battlefield action, but that’s not exactly this production’s strong suit. The DVD features an insightful radio interview with Tom Stoppard conducted by critic Elvis Mitchell, where the writer talks about the Parade’s End characters and describes the process of adapting the novels. (He hadn’t read them until he was approached about this project.)

Adapting one novel is hard enough, so imagine the challenge of condensing four into a relatively cohesive story. Stoppard seems to have mostly solved this puzzle by making the Christopher/Sylvia/Valentine love triangle the centerpiece of the story. At 300 minutes, Parade’s End still has enough time to explore Big Ideas like the rise of feminism and the onset of World War I in England, as well as its effects on the country. This is a must-see for Benny Batch fan club members, and an absorbing character drama for the rest of us.