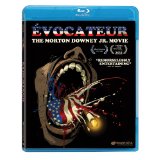 I have a prediction about reality shows: with a new one seemingly sprouting up like a weed every few minutes, the number of people on television will eventually be greater than the number of people watching at home. Granted, some of these shows are amusing, educational and even inspirational. But too many of them reward negative, repulsive behavior with fleeting fame. Speaking of rewarding negative, repulsive behavior with fleeting fame, The Morton Downey Jr. Show was on the air for less than two years, yet that was long enough to earn its host the title of “Father of Trash Television.”

Evocateur chronicles the meteoric rise and spectacular fall of Downey’s controversial, wildly successful talk show in the late 1980s. Documentary filmmakers Seth Kramer, Daniel A. Miller and Jeremy Newberger frame their subject’s life story as an outrageous psychological drama. As a result, the film also delves into Downey’s past, including his childhood as the son of neglectful showbiz legend Morton Downey and an alcoholic mother, as well as his surprising ties to the Kennedy family in the 1960s. In fact, the film dedicates so much time to the past, the final act of Evocateur — and the final act of Downey’s life — feels rushed. (He died of lung cancer in 2001.)

I say his ties to the Kennedys were “surprising” because Downey is plainly painted as the precursor to conservative commentators like Glenn Beck, Sean Hannity and Bill O’Reilly. Evocateur suggests that, like some of those current multi-media stars, a significant part of Downey’s over-the-top, on-camera persona was an act. Downey’s daughter, Kelli Downey Cornwell, states her dad was only his outlandish self when there was a camera around. (This includes personal camcorders, judging by the boorish behavior we see from Downey in home video footage.) Meanwhile, fellow talk show host Sally Jessy Raphael wryly points out that if you pretend to be a tree long enough, you’ll grow leaves. In other words, Downey eventually came to believe his own spiel.

Raphael is joined by an eclectic mix of talking heads, like conservative commentator Pat Buchanan, comedian and Mort fan Chris Elliott (who parodied Downey on David Letterman’s “Late Night” NBC talk show), former Mort Show guest Gloria Allred, and Mort Show bodyguard David Giegold (the original Steve Wilkos). The most affecting commentary, however, comes from Bob Pittman, the MTV co-founder who created The Morton Downey Jr. Show. In present-day interviews, Pittman expresses regret about making the 55-year-old radio host a star, which he says wound up being to Downey’s detriment. On the other hand, the film also features frequent commentary from a trio of Mort Show producers who mostly laugh off their former boss’s more offensive behavior.

I was 5 when The Morton Downey Jr. Show premiered on Oct. 19, 1987. Since talk shows don’t exactly play well in re-runs, this was my first exposure to Downey’s boorish, chain-smoking antics. (Evocateur also makes the point that Downey borrowed a good dose of his act from The Joe Pyne Show, which aired in the ‘60s.) I’m surprised to say a lot of the Mort Show footage — which is a clear forerunner to The Jerry Springer Show — remains magnetically outrageous, even by today’s lower standards of good taste.

Besides loudly berating his guests — no wonder the show lasted less than two years; why would anyone ever agree to be his guest?!  — we see Downey physically harass a woman and constantly threaten violence, all in the service of feeding “The Beast”, the nickname for his live, often New Jersey-based studio audience. The film chronicles Mort’s “greatest hits,” including the Tawana Brawley case hoax, which helped make Al Sharpton a star. (Gee, thanks for that one Mort.) Downey, we’re told, understood the value of performance. He made emotional rather than intellectual arguments and he wasn’t tethered to facts, which meant that he could say anything. Given his prior ties to the Kennedys — and Downey’s maniacal drive to become more famous and successful than his father — Evocateur slyly posits that Downey’s politics were whatever they needed to be at the time for him to get ahead.

Then again, that may be the only sly thing about Evocateur. Like Downey’s relationship with his audience, there’s not a lot of room for nuance here. The movie punctuates key moments with thunderclap sound effects and uses highly-stylized animated segments to recreate portions of Downey’s life. The gonzo tone reminded me of Oliver Stone’s more out-there efforts from the 1990s — which I liked — but sometimes it went too far and got too indulgent. For example, I could’ve definitely done without the occasional dramatic readings of Downey’s poetry. Then again, Morton Downey, Jr. made a career out of going too far, so this overly bombastic documentary probably suits its subject perfectly.

Evocateur: The Morton Downey Jr. Movie is presented in an aspect ratio of 1.78:1. The 1080p image is arrived at with an AVC MPEG-4 codec at an average of 25 mbps. The film juggles a few different video sources with various aspect ratios. This includes footage of Downey’s famous dad from the 1930s, a healthy amount of clips from the 1980s talk show, the animated bits, and present-day talking head footage.

I always like to use the present-day interview footage as the baseline when I’m judging the visual presentation of documentaries. Those images are suitably sharp, if a bit muted, on this Blu-ray. (You can really tell the difference during an early, split-screen shot between of present-day Pittman and vintage Downey.) The animated segments, however, come to vibrant life and exhibit strong color and contrast. Naturally, the older footage is going to look inferior by comparison, but some of the Mort Show clips looked remarkably clear considering their age.

The DTS-HD Master Audio 5.1 track is busier than you’d expect in the normally dialogue-heavy documentary world. Subs spring to life for the thunderclap sound effects. Meanwhile, the rears are used to pump out the guitar-driven score and ambient noise from the present-day segments, including a trip to the former Mort Show studio in Secaucus, N.J. The sound and dialogue from all the archival segments comes through clearly enough, but, not surprisingly, is confined to the front speakers.

Commentary with directors Seth Kramer, Daniel A. Miller and Jeremy Newberger: The trio, who watched the Mort Show in the late ‘80s, talks about combing through more than 400 hours of talk show footage (courtesy of Pittman). We also learn that it took five years to make this movie. I generally think commentary tracks with documentary directors are worthwhile because the filmmakers inevitably talk about the overwhelmingly high amount of material they couldn’t include in their final cut. That being said, these guys are entertaining and insightful in their own right.

Behind the Animation: (4:29) Animation director Murray John takes us through the process of creating the cartoon bits in the documentary. John studied clips of Downey on YouTube and used “Mad” magazine-style drawings to represent the film’s star. We see sketches, storyboards and some risqué deleted bits.

An Evening with Kellie Everts: (1:56) An amusing, completely inessential expansion of the segment with Everts, who appeared in the “Stripper” episode. We follow the busty grandcougar to a bar as she searches for young studs. Totally skippable.

Early on in the documentary, we see a clip of Ted Koppel interviewing Downey about his outrageous behavior and asking “how much further can it go?”  Well, a never-ending parade of fame-hungry wannabes — and more than a handful of savvy media personalities — have spent the subsequent 25 years pursuing the boundaries of that question.

Evocateur is stylish and eye-opening for anyone who was too young to see the Mort Show when it was on the air. The fact that the film is only slightly more subtle than Downey himself shouldn’t keep you from checking out this engaging, trash-tastic documentary.