Posted in: Disc Reviews by William O'Donnell on November 16th, 2013 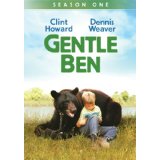 In the Florida everglades, the Wedloe family have a 650-pound tame bear for a loyal pet. A very young Clint Howard stars as Mark, the son of a game warden (played by Dennis Weaver),who leads Ben around on several adventures and merry mishaps. Though “merry” may be the wrong word as Mark and Ben encounter their fair share of real life dangers.

Right off the bat, this show leaps into stories that are far more intense than one might expect from a family program from the 1960s. In the debut episode, the entire community faces a deadly hurricane. The characters spend the entire hollaring at eachother in the driving rain as things get torn apart around them. As the season continues, the high stakes hardly let up as members of the Wedloe family are threatened by poachers, wrestle with alligators, get trapped by wild fire, and square off against a huge number of malevolent hunters, voodoo doctors, and wildlife in every single episode. At one point little Mark is trying to help Burt Reynolds get out of a crashed plane while fighting away a tiger with a fire extinguisher…you read that correctly. Each tale was always moral and wholesome, but never exactly soft.

Major credit for the show’s storytelling success should go to Clint Howard for his unblinking control over Ben. Said control is not cruel anchors the believability of their relationship for there is no cruelty behind it, but rather a strong sense of trust and companionship. Howard, as Mark, grips a short chain around Ben’s neck and guides this enormous mammal around with the ease of handling a stuffed teddy bear. (He also throws a mean right hook too, which he gets to use on many occasions…even against his bigger brother Ron Howard in one episode).

Fullscreen. The colours are very soft, which is pretty standard for rereleases from so many decades ago. The film has been very nicely transferred and the visual presentation is clear.

Presented in the original English Mono track. The audio is clear, without much notable aging or distortion.

Commentary: Different episodes have different commentary tracks. Some are by Clint Howard by himself, others feature Clint Howard with his father Rance, who wrote and acted in a few episodes. All of the tracks are filled with fond reminiscing. There are many references to cast and crew members that they had befriends and/or worked with again on other projects. Clint talks more actively when his father is around. When he is alone he seems to be watching more and we hear his reactions. Minutes could go by and all we’d get is laughter.

Gallery: Rare pics from the production days of this show.

Aside from offhand reference in the likes of the Simpsons and King of the Hill, I was hardly awair of this show. I’m sure I’m not alone in thinking this show has been largely overlooked for years. There are 28 episodes over four discs which should make for an ample refresher for the uninitiated.