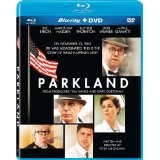 “On November 22, 1963, John Fitzgerald Kennedy, the 35th president of the United States, made a political trip to Dallas, Texas with his wife, Jacqueline, and Vice President Lyndon B. Johnson.”

Of course, you don’t have to be an American History buff to know what happened next. The circumstances surrounding President Kennedy’s assassination instantly seared themselves into the country’s collective consciousness. This month marks the 50th anniversary of President Kennedy’s death, which has brought along the expected number of tributes, TV specials and movies breaking down the crime and its corresponding conspiracy theories. Parkland, however, serves as a microcosm of how Kennedy’s assassination affected an entire nation.

“This story is based on the true events that took place on that day and the three that followed.”

Parkland opens with newsreel footage of JFK in Ft. Worth, Texas and his fateful arrival in Dallas. Since the president’s death is depicted within the first 10 minutes, we’re also introduced to the disparate cast of characters affected directly by the assassination. We don’t actually see the moment where JFK gets shot; instead, we see the horrified reaction of Abraham Zapruder (Paul Giamatti) as he inadvertently films the president’s death.

From there, the action jumps to a few crucial places. President Kennedy is taken to Parkland Memorial Hospital, where youthful resident Jim Carrico (Zac Efron), with help from stoic trauma nurse Doris Nelson (Marcia Gay Harden), does his best to save the president’s life. Meanwhile, Forrest Sorrels (Billy Bob Thornton), the chief of the Dallas Secret Service, quickly works to develop the Zapruder film and learn what really happened. We also catch up with FBI Agent James Hosty (Ron Livingston), who had a surprising connection to assassin Lee Harvey Oswald (Jeremy Strong) prior to the shooting. Most surprisingly, the film also depicts the reaction of Oswald’s family, including Lee’s stunned brother Robert (James Badge Dale) and their narcissistic mother Marguerite (Jacki Weaver).

Parkland is based on Vincent Bugliosi’s book, “Four Days in November.” It’s also the first film written and directed by journalist-turned-filmmaker Peter Landesman, who largely eschews politics and conspiracy theories in favor of interpersonal drama. The former New York Times writer’s pedigree attracted some impressive names to this project. The film counts Tom Hanks as one of its producers, and the cast is a veritable Who’s Who of ultra-talented character actors.

It’s a good thing they all came out to play because the various plotlines in Parkland wind up being vivid sketches rather than fully-developed stories. The film clocks in at a brisk 94 minutes, but you get the sense Landesman could’ve easily made a great 94 minute movie that solely focused on any one of the assorted storylines we see here. For example, how wild is it that Kennedy and Oswald died in the very same hospital two days apart? (I honestly had no idea this had happened, but it obviously makes perfect sense; how’d you like to be that medical staff?) I’m also confident each of these real-life threads had enough stranger-than-fiction moments — like the Dallas medical examiner and the Secret Service literally fighting over JFK’s body, or members of the press serving as Oswald’s pallbearers — to make them more emotionally engaging, if given the time.

That’s where the cast comes in. The actors may not have a lot of screen time to convey the purpose and emotion of a scene, but this professional group manages to get it done. I was particularly impressed by Giamatti (shell-shocked and resigned) and Thornton (seething and dutiful). The biggest revelation, however, was the affecting Oswald storyline, which is carried wonderfully by Dale’s mournful performance as Robert and given a kooky kick by Weaver’s delusional Marguerite. Efron also acquits himself nicely in his first non-heartthrob role. The cast is so ridiculously stacked that you’ll be wondering why Oscar nominee Jackie Earle Haley only pops up for a few seconds as a priest and…wait, is that Tom Welling?

Despite the scattered film’s inevitable shortcomings, Landesman proves to be a very adept visual storyteller. Cinematographer Barry Ackroyd (The Hurt Locker, Captain Phillips) and his jittery camera constantly have the viewer peeking over shoulders and angling to get a better look at what’s going on. As a result, modern audiences are placed in the raw mindset of those who directly experienced JFK’s assassination. It’s a neat trick, especially when you consider the large number of people who never stopped thinking about that shocking crime in the first place.

Parkland is presented in an aspect ratio of 1.78:1. The 1080p image is arrived at with an AVC MPEG-4 codec at an average of 28 mbps. The film’s opening minutes feature a heavy mixture of vintage archival footage and the strong HD image that eventually serves as the baseline for Parkland. The sharp contrast between the two is an early signifier that the film doesn’t intend to convey its time period by attempting to reproduce the grainier look of the newsreel material. (It’s a smart move because the period is conveyed very strongly by Bruce Curtis’ production design, Rodney Becker’s art direction, and Kari Perkins’ costumes.)

The palette is mostly muted — not surprising given the film’s mood and all those gray-ish G-man suits — but the disc shows it’s capable of springing to vibrant life during the brief, ludicruous, Iwo Jima-esque struggle to load JFK’s coffin onto a plane. Black levels are also strong during a couple of darkened scenes. Overall, this Millennium Entertainment Blu-ray offers a clean (no aliasing/banding), versatile visual experience.

The Dolby TrueHD 5.1 track is highlighted by James Newton Howard’s alternately propulsive and sorrowful score (which occasionally gives the subs a workout). In fact, the score dominates the surround sound field to the point where sound effects and most ambient noises are confined to the front speakers. As a result, immersion isn’t as strong as you might expect. (Especially during those frantic sequences in Parkland’s emergency room or the FBI office.) The good news is the track offers nice balance and excellent separation during those same frantic sequences, making every bit of overlapping dialogue easy to understand.

Director’s Commentary: Landesman is extremely complimentary of his cast and reveals that he was able to sell producers on the umpteenth JFK project by telling the familiar story as if it were happening now. He also maintains that every event depicted in Parkland is “verifiably true.” Although I tend to prefer conversational commentary tracks with more than one person, this one is definitely worth a listen because of the wealth of historical and production details Landesman covers.

Deleted Scenes: (6:29) This collection of six scenes is highlighted by two post-shooting confrontations between FBI agent Hosty and Oswald, the guy Hosty kinda, sorta let slip through his fingers. Features a Play All option. Presented in HD.

I realize you’ll be inundated with JFK-centric tributes and memorials during the run-up to the 50th anniversary of his death. That being said, you should absolutely carve out time to watch this tense, well-acted drama, presented quite well in this fine-looking Blu-ray.