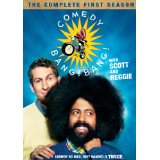 IFC’s irreverent talk show spoof has more than its share of bizarre moments involving robotic crows and imaginary dogs that stubbornly refuse to speak. But you shouldn’t be fooled by its anarchic tone; Comedy Bang! Bang! takes very specific aim at decades of inane talk show conventions and gleefully skewers them with a straight face. In other words, it’s not just a funny show; it’s a funny show made by comedy nerds for comedy nerds.

Comedy Bang! Bang! is the brainchild of creator/writer/host Scott Aukerman. The TV show is a spinoff of Aukerman’s successful podcast of the same name, which began airing in 2009. Aukerman previously worked as a writer/performer on HBO’s Mr. Show with Bob and David — both Bob Odenkirk and David Cross guest star in this batch of Bang! Bang! episodes — and created the sketch that became Funny or Die’s Between Two Ferns with Zach Galifianakis. You can absolutely see the comedic DNA of both of those shows in Comedy Bang! Bang! which mixes the outrageous, farcical sketch comedy of Mr. Show with Fern‘s improvised interview segments.

Not surprisingly, Galifianakis serves as Aukerman’s inaugural guest in the creatively-titled first episode, “Zach Galifianakis Wears A Blue Jacket and Red Socks.” (All the episode titles follow the same template.) Other guests who gamely sat on Aukerman’s couch during season 1 included Jon Hamm, Seth Rogen, Elizabeth Banks and Weird Al Yankovich as themselves. They were joined by less-famous, but no-less-funny comics like Will Forte, Casey Wilson, Chris Parnell, as well as Paul F. Tompkins, Thomas Lennon and others who reprise characters from the Bang! Bang! podcast.

It’s not hard to see why some of the bigger names agree to appear on the show. Unlike Galifianakis’ faux-antagonistic tone on Ferns, Aukerman’s TV host is a faux-genial, eager-to-please emcee. More importantly, his ridiculous, unpredictable questions — like asking Hamm to walk him through an *unusual* day in his life — probably serve as a refreshing antidote from all the asinine stuff they get asked over and over in real life. All of the guests roll with the punches impressively. (A couple of them stall for a few seconds by unconvincingly saying “excellent question” before they proceed.) My favorites were blonde Amy Poehler inexplicably wearing a blonde wig throughout her interview, Paul Rudd casually name-dropping semi-obscure acquaintances like Perfect Strangers star Mark Linn-Baker, and Michael Cera for successfully turning the tables on Aukerman. (Cera offers a three-part answer to a two-part question.)

Each episode features a lead guest, followed by two considerably lesser-known characters. My favorites among this group include Hero Pilot Chet Barnsider (Forte), California TV host Huell Howser (James Adomian) and Andrew Lloyd Webber (Tompkins, not even attempting to impersonate the real Andrew Lloyd Webber). The three guests typically end up playing impossible-to-win games like “What’s in the Box?” and “What’s the Song Title?”, where they have to assign a title to a song that was made up on the spot.

Aukerman is joined by sidekick/one-man-bandleader Reggie Watts, who provides the acapella musical intros and outros for the show. (The lead guests, however, appear on Aukerman’s couch without warning.) His discordant compositions are consistently amusing, but he also serves as a mockery of every sidekick (Ed McMahon) and bandleader (I’m looking at you, Kevin Eubanks) who ever overlaughed at a talk show host’s jokes. (“His job is to laugh every 90 seconds or so.”)

And that’s just one of the many ways Comedy Bang! Bang! sends up the format. Season 1 features a number of “Man on the Street” segments, including a “Man in the Street” segment that doesn’t end too well for Aukerman. There’s also a tense scene between a couple of cameramen (Topher Grace and Will Arnett) when Rogen asks for a close-up on a picture of him surfing. My absolute favorite bit, however, involved “The Assassins” a fake cop movie that Aukerman agreed to appear in despite only getting to read the scenes he was in. (Unfortunately for him, the movie — starring Colin Hanks and The Wire‘s Robert Wisdom — turns out to be about how disgusting Scott Aukerman is.) Heck, there’s even time to take on targets like Maury and Dennis Miller Live.

Aukerman obviously isn’t afraid to poke fun at himself; each episode opens with a graphic that botches his exceedingly anonymous name. (He’s alternately introduced as “Stop Tacoman”, “Shock Jockerman” and “Yacht Rockerman.”) Not all the bits work, and some are stretched too far — like Aukerman’s high-school crush, played by Jamie Denbo, hanging around the studio for an entire episode — but each installment has enough funny stuff going on that a lot of it is bound to land. Season 1 even ends on something of a cliffhanger, with the talk show’s modest-looking set revealed to be a CGI extravaganza.

The DVD set includes all 10 episodes on two discs. There’s also a treasure trove of special features, including commentaries on each episode, full-length alternate versions of every celebrity interview (except Parks and Recreation star Adam Scott’s), deleted scenes, a supercut of insults from “The Assassins”, and more. Season 2 has already aired on IFC, and a 20-episode third season is slated to premiere later this year. It may have taken longer than than expected for the very funny first season to make its way to DVD, but Anchor Bay has made up for it with this set filled with audience-pleasing extras.