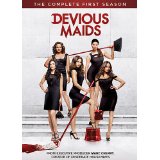 “In my experience, people just aren’t that interested in what happens to the help.”

Lifetime viewers and Devious Maids creator Marc Cherry beg to differ. After debuting to modest ratings last summer, the show steadily gained viewers and hit a series high in viewership with its finale. (Not surprisingly, it was promptly renewed for a second season.) Cherry previously struck eight seasons worth of gold with Desperate Housewives on ABC. As someone who  watched more Housewives episodes than I care to admit, I can appreciate both the positive and negative ways this show echoes Cherry’s previous smash success.

“Who’s going to clean all this up?”

For example, Cherry apparently has never met a juicy, season-long mystery he didn’t incorporate into one of his shows. Devious Maids opens with the dramatic death of a maid named Flora (Paula Garces) at the home of Beverly Hills power couple Adrian and Evelyn Powell (Tom Irwin and Rebecca Wisocky). Flora stumbles into the middle of a fancy party and falls dead into the Powells’ swimming pool.

Carmen, Rosie and Zoila quickly welcome Marisol into their inner-circle/gossip sessions. By the end of the first episode, however, it becomes clear that Marisol’s arrival in town shortly after Flora’s murder isn’t a coincidence. As the season progresses, the show unravels an intricate web of blackmail, sexual voyeurism, hidden pregnancies, drugs and infidelity.

So we have a quartet of female characters (plus Valentina’s junior exploits) engaged in a variety of alternately silly, sexy and soapy antics who occasionally come together to support each other. As I said earlier, Devious Maids follows the Desperate Housewives playbook pretty closely. (Even the jaunty musical cues sound the same, despite the fact that the two shows have different composers.) Sanchez briefly appeared as Carmen in the Housewives series finale, so I suppose Devious Maids is technically a very loose spin-off. The pilot — based on the Mexican series “Ellas Son La Alegria del Hogar” (They Are a Home’s Joy) — was initially ordered by ABC, which passed. Lifetime swooped in and gave the show a 13-episode order. (The 3 million viewers Maids pulled in for its finale would’ve been a minor travesty on ABC, but that number is good enough to make the show a rock-solid cable hit. Go figure.) Meanwhile, Housewives star Eva Longoria is an executive producer on Maids.

The most obvious difference between the two shows is that all the main characters on Maids are Latinas. On one hand, it’s terrific to see Hispanic actors getting the opportunity to carry a show outside of Univison or Telemundo. (Bonus points for giving that opportunity to women, and double bonus points for having 3 out of 5 of those women be 40 or older.) Granted, the highest-paid actress on TV right now happens to be a 41-year-old Latina, but this cast still represents a rarely-seen opportunity.

On the other hand…did they really have to be playing maids? The Latina housekeeper archetype has been around for as long as I can remember (and usually comes with a comically heavy accent). So it would’ve been nice if the first show to push this many Hispanic actresses to the forefront had come up with something a little more imaginative for them to do. Don’t believe me? I’m Puerto Rican, and I live with a Hispanic woman; every time a promo for Devious Maids popped up last year, her eyes would roll to the back of her head.

After actually sitting down to watch the show, it quickly became apparent how Cherry and company worked around this problem: the show may be called “Devious Maids”, but the people who really come off looking the worst are the cruel, selfish clowns who employ them. (Nevermind Latinos; rich white people are the ones who should be most upset about their portrayal on this show!)

Of course, even with all the murder and (basic cable) sexual shenanigans on display, it’s all in good fun. Besides the five main characters, Cherry has populated the show with a wide variety of spectacularly snobbish jerks. The best of the bunch are the Powells, who just can’t seem to be able to hang on to their hired help; Irwin is magnetically creepy as Adrian, while Wisocky nails some of the show’s best, most dehumanizing put-downs. Klaveno is also hiss-worthy as the self-absorbed Peri. These characters are all beastly in their own wicked ways, but I was surprised and delighted to also see them get their vulnerable moments. Meanwhile, vets like Show (Melrose Place) and Lucci (All My Children) are pleasing presences because they know their way around this soapy material. (Lucci, in particular, is a lot of fun as the youth-obsessed Genevieve.) I also enjoyed the relationship between Marisol and Taylor, so it’s a shame Brown (along with a couple of other cast members) reportedly won’t be returning for season 2.

The five lead characters are a little more hit and miss. Ortiz (Ugly Betty) is the de facto lead, and she gives Marisol a relatable amount of gumption. Reyes (Scrubs) has played this sort of “suffer-no-fools” type of character before, so watching Zoila tell Genevieve (her boss) what to do feels believable. Sanchez gets most of the overtly comedic moments, so her dramatic scenes don’t always land. Then there’s Ramirez, who often delivers her lines in a whiny, unpleasant way. Ganem, meanwhile, doesn’t have as much to play with as her co-stars, but there was a sense of Valentina growing up (and growing out of her mom’s overprotective shadow) as the season went along. Bottom line: the actresses serve the material well enough, but they don’t elevate it as well as their Emmy-nominated/Emmy-winning predecessors on Housewives.

Since Devious Maids is on cable, the season consists of 13 episodes instead of 22 or 24. I actually think that’s a terrific advantage for Cherry; it’s better to wrap a mystery up in 13 episodes, rather than having to string it along for almost twice that long. The mystery here unfolds at a brisk, unhurried clip. By episode 3/“Wiping Away the Past”, we get a major bombshell about Taylor’s (and Flora’s) extracurricular activies, and in episode 7/“Taking a Message” one of Marisol’s fellow maids discovers why she really came to town. (Honestly, all it took was a chance encounter and less than a minute of Googling.) After that, the various storylines — which had been kept largely separate — start to intertwine. The finale definitively wraps up the Flora murder mystery — and deposits another dead body into that same swimming pool — but leaves a few cliffhangers for season 2.

Devious Maids: The Complete First Season features all 13 episodes on three discs. Special features include deleted scenes, a blooper reel, and a featurette on how Atlanta (where filming takes place) stands in for Beverly Hills. Shows like Downtown Abbey and Upstairs, Downstairs have proven there’s plenty of great drama to be mined from the lives of servants and the rich people they clean up after. Devious Maids isn’t really interested in being that kind of show. What the show may be lacking in cohesion and ambition, it makes up for in solid performances and sharp, funny one-liners. Season 2 premieres April 20. So if you’re Desperate for a new, soapy obsession, there’s plenty of time to catch up.