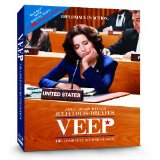 “…I’m the f—ing Vice President of the United States, and I have something to say.”

If you’ve seen Veep, you know it’s almost impossible to quote the show without including an f-bomb or any of the show’s crassly creative put-downs. The sitcom’s central joke remains that the vice presidency might be the most high-profile unimportant job in the world. As a result, the second season of HBO’s caustic comedy sees VP Selina Meyer making moves to improve her political standing. Of course, she and her harried staff can’t avoid the humiliations and indignities that come with the job.

Season 2 opens with Meyer (Julia Louis-Dreyfus) hitting the campaign trail during midterm elections. Since the veep’s own neck isn’t on the line, it’s only a moderate disaster when her party gets crushed. (The show still conspicuously refuses to reveal the current administration’s political leanings, seemingly under the premise that *everyone* in this version of Washington, D.C. is a selfish, profane, angry monster, so what’s the difference?) One of the lone bright spots to come out of the midterm elections is an upswing in the veep’s popularity; sure, it’s only a 0.9 percent bump, but it still counts. Meyer parlays her good standing with the public (almost 1 percent!) into an important-sounding foreign policy post that’s not all it’s cracked up to be.

The veep is surrounded by her trusty staff, and the distractions they each bring to the table. Chief of Staff Amy Brookheimer (Anna Chlumsky) serves the veep competently, but her dad’s pesky health problems keep getting in the way of her job. Communications director Mike McLintock (Matt Walsh) is dealing with some financial problems (namely a cumbersome boat he owns), while smarmy deputy communications director (or something…it’s not clear what he does) Dan Egan (Reid Scott) always seems to be on the verge of jumping to greener political pastures. By that same token, no-nonsense personal assistant Sue Wilson (Sufe Bradshaw) is sneaking off to interview for other jobs, while gloriously hateable White House liaison Jonah Ryan (Tim Simons) won’t stop barging into the office. Heck, even Gary Walsh (Tony Hale) — who worships the ground Meyer walks on — is more concerned with yammering about his new girlfriend Dana (perfectly-annoying recurring guest Jessica St. Clair).

There are two solid additions to the cast in season 2: Kevin Dunn is excellent as Ben Cafferty, the president’s fatalistic White House chief of staff; and Gary Cole as number-crunching strategist Kent Davison, who is nicknamed the “Pol Pot of Pie Charts.” Cole is appropriately humorless, and Dunn gets as many filthy lines as anyone else in the cast. (Ben summarizes the veep’s role thusly: “It has been the job of the VP over the ages to take it in the a– to save the president.”) However, my favorite part of Dunn’s performance is that his character looks genuinely beleaguered. As a result, Ben is one of the few people on this show who comes off as a recognizable human being rather than an insult-spouting hate machine.

Of course, if you’re going to have a bunch of insult-spouting hate machines, you want their dialogue to be written by showrunner Armando Iannucci (The Thick of It, In the Loop). I realize the biting satire of Veep doesn’t exactly lend itself to a lot of humane comedy. However, I still wish the show did a better job of differentiating these characters from one another. All of the actors seem more settled in their roles this year, but it still feels like too many of them speak in the exact same hyper-literate, profane voice. (For example, the terms “procrasturbate” and “exhaustipated” are conveniently coined by two separate people.) I’ve always considered Dan and Sue to be the most expendable/redundant characters, so I got a kick out of the fact that they were the first two sent on furlough in ep. 7/“Shutdown.”

Louis-Dreyfus has won Emmys for her work in each of the show’s two seasons. It’s probably tempting to either turn the veep into a total buffoon or have her play it straight against her zany staffers. The actress expertly walks the tightrope between those extremes. Hale picked up a well-deserved Supporting Actor Emmy for his work this season, while Chlumsky earned a Supporting Actress nomination; it’s not a surprise given that Gary is the only sweet character on the show and Chlumsky appears to have been born to spout Iannucci’s language. (This season, the actress shares some scenes with In the Loop co-star Zach Woods.) I also enjoy the slobby work Walsh does as the increasingly tragic Mike, the unapologetically nasty work by Dan Bakkedahl as slimy congressman Roger Furlong, and Simons’ aggressive peskiness.

More importantly, Iannucci raised the comedic stakes in season 2. I expected embarrassing international incidents, like when Meyer insults all of Europe with a parody of “50 Ways to Leave Your Lover” in ep. 4/“The Vic Allen Dinner.” But the show also found the comedy in moments that carried more heft. For example, we see the veep obsess over an unflattering war room photo of her during a hostage crisis. (As if something like that would ever happen.) We also see her deal with crises involving her family, a government shutdown, and more. The turning point comes during the delicious discomfort of ep. 8/“First Response”, which features guest star Allison Janney as a TV interviewer who forces Meyer to confront all of the season’s major issues. (“First Response” is also my favorite episode of the season, along with the madcap, flip-flopping season finale “D.C.”)

The beginning of season 2 is actually pretty disorienting, particularly the animosity between Dan and Rep. Furlong. (And this is from someone who had actually seen the entire first season) The Blu-ray doesn’t offer a recap of the previous season, but this set of episodes quickly settles into its hostile groove. The show remains fast and frequently funny, and season 2 — like its main character — displayed an encouraging willingness to take bigger swings. However, I still feel like Veep isn’t quite as dynamic or incisive as it could be. (At least not incisive beyond, “everyone is awful”; I mean, even the war hero is annoying.) In other words, I think season 2 of Veep improved over season 1 — by somewhat more than 0.9 percent — but I still don’t feel like the show has reached its full potential.

Veep: The Complete Second Season is presented in its original aspect ratio of 1.78:1. The 1080p image is arrived at with an AVC MPEG-4 codec at an average of 31 mbps. Veep has a loose, cinema verite filming style that’s actually a really good match for a show that heavily incorporates improv into its process. As a result, this is probably the least glamorous looking show you’ll find on HBO. (Depending on whether or not Curb Your Enthusiasm ever comes back.) That obviously doesn’t make for the most dazzling HD presentation, but the Blu-ray shouldn’t be penalized too harshly for merely replicating the show’s intentionally muted palette. (VP Meyer tends to be the only character who wears colors that pop.) Some brigther, bolder outdoor scenes — like the 10K race in ep. 9/”Running” — hint at the show’s visual potential in HD. Pulling off an image that’s both sharp and drab is tricky, but this Blu-ray serves its material well.

The DTS-HD Master Audio 5.1 track is obviously here to serve the salty dialogue. On this front, the track is exceptional. There’s terrific clarity and separation, which is crucial for the moments when more than two people are yammering. The track does a strong job of making sure each nasty quip is audible. It’s a good thing too, because there’s not much more to the track beyond the dialogue. After the show’s brief theme, music is used very sparsely. The bigger missed opportunity was incorporating a bit more ambient noise/chatter in the surround speakers to create an immersive experience. It wouldn’t be a stretch because the lion’s share of the action takes place in either a busy office or one of Meyer’s public functions. (The most we get are subtle sound effects, like the echoing of the veep’s heels as she walks down some grand hallway.) For better and worse — just like with the show itself — dialogue is king here.

Audio Commentaries: There are commentaries for Eps. 1, 3, 8, and 10. They each include at least four people, including the likes of Iannucci, writer Tony Roche, and cast members Louis-Dreyfus, Walsh, and Simons. As you can imagine, these chats feel pretty crowded. But Iannucci does have time to outline the differences between season 1 (Meyer coming to terms with her futile position; introducing her staff) and season 2 (Meyer making a grab for power). We also learn that Louis-Dreyfus apologized to some very young co-stars for Meyer’s use of a very bad word in front of them in the finale. These aren’t the most in-depth chats you’ll ever find, but there are a lot of laughs to be found.

Deleted Scenes: (39:48) Actually, it’s more like “Deleted Moments” from every episode, also available in a Play All format on Disc 1 (16:25) and Disc 2 (23:23). Instead of full scenes or excised storylines, these are really deleted zingers or extended versions of existing material. As a result, there’s some terrifically funny stuff here, but nothing that would’ve deepened or added much to season 2’s arc. Presented in HD.

Season 3 of Veep returns April 6. There are only 10 episodes in season 2, so you should be able to burn through them pretty quickly. Watching the show on Blu-ray has its advantages and disadvantages.

On one hand, the show moves so fast that it plays better on repeat viewings, plus you have the ability to go back and catch a line you missed. (Veep‘s lightning-fast pace also means a lot of great lines aren’t given the chance to properly land and make an impact. That’s why Louis-Drefus’ impeccable comedic timing wins her all the awards.) On the other hand, watching the episodes in rapid succession dulls some of the show’s sharp edge because the beats start to feel repetitive.

If you have an appreciation for language and all its potential (profane) uses — ep. 3/“Hostages” is basically sponsored by the word “robust” — you probably already watch Veep. If not, you should absolutely check it out.