Posted in: Disc Reviews by Brent Lorentson on March 28th, 2014 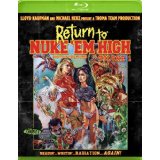 When you get a film from Troma to watch, you have to view it differently than you would view just about any other film.  After all, Troma is the VHS and DVD equivalent to the days of Roger Corman and the B-movie fanfare he could travel from one Cineplex to the next.  Troma founder Lloyd Kaufman has been writing and directing B-cinema schlock for 40 years and has managed to make money off it, so for those naysayers out there, keep in mind he still is responsible for The Toxic Avenger as well as Tromeo & Juliet.

With Return to Nuke’em High, Kaufman seems to be taking on his most ambitious project yet.  The film is broken up into two separate volumes, and volume one sets up the epic gross-out satire wonderfully.  The opening sequence narrated by none other than Peter Parker himself (Stan Lee) about the previous events that took place in the 1986 cult classic Class of Nuke’em High.   With the viewer now caught up, we meet Chrissy (Asta Paredes); she hangs with her crew of misfit friends, though she secretly blogs about the health and safety issues going on at the school all while keeping her boyfriend Eugene (Clay von Carlowitz) at bay from his sexual advances.  But the boat gets rocked when rich new girl, Lauren (Catherine Corcoran) arrives and Chrissy sets her vengeful/lustful sights upon her.

Things start going horribly wrong after a Taco Tuesday disaster when a student combusts from indulging on the radiation-saturated tacos.  Even the radiated tacos are displayed in grand fashion in a day-glo green.  During an in school memorial service, the school glee club transforms on stage and turns into a group of Cretins, basically looking like a group of 80’s punk kids who harmonize quite well.  It’s ridiculous and over-the-top as the Cretins charge through the school fighting those who cross their path, but it’s when they pause from their destruction escapades to do an a capella number that is pure Troma genius.  It’s this over-the-top nature you come to expect from Kaufman and his films, and he delivers it.

The sequence that kept me most amused came as the Cretins are running loose and Lauren is looking for her missing duck.  The Cretins play a less than savory part in reuniting the girl with her foul pet, which leaves her running the streets with the duck lodged down her throat.  If this were not enough, the duck has also gotten into some of the radiation waste, which has more than tainted this foul bird.  As Lauren scrambles around town with the bird protruding from her mouth and no one around to help, it is none other than Chrissy who crosses her path and helps her dislodge the bird.

Sparks fly between the two girls, and in tasteful Troma fashion the affection is on display, as is the explanation of how the two girls become mutants.  What mutates upon them is something better left seen than read, but it pushes the envelope of bad taste, and that is what you come to expect.

It’s been a while since I’ve sat through a Troma film and actually had a good time watching the film.  This sequel is in the bad taste and cheesy nature that made Troma so much fun back in the 80’s.  The over-the-top gore, the gratuitous sex, along with goofy characters sputtering dialog that’s so bad its good simply shows that Kaufman is still the king of camp.

Return to Nuke’em High Volume 1 is presented in a 1.78:1 aspect ratio.  The 1080p image is arrived at with an AVC MPEG-4 codec at an average of 24 mbps.  Unfortunately for this film, its quality maintains what you would expect from Troma.  The look here is sharp but has a very cheap digital look to it as though there was no time spent to color time this and give this a grainier look like the original Nuke’em High.  I’m not always for the after-effects look to give a digital film a false film look, but this is a case where the post-production effort would have been a benefit.  The look is uneven at times where it seems as though different cameras were used and no one bothered to adjust things properly; I’m guessing this would be due to reshoots.  There are noise issues throughout the film; really, on a technical level this film is a bit of a mess.  Some may defend the look and say it’s part of the Troma experience, but these are issues that could be fixed to at least not be so obvious.

The Dolby Digital 2.0 track is underwhelming but still at least manages to give us clear dialog throughout.  Of course an immersive 5/1 would have been nice and could have added to the gross-out factor of the film, but at the end of the day I have to review what we are given.  The music cues work well here, giving us an added emphasis to the more action oriented scenes.  With the transformation scenes or when we see the radiation goo at work, the 2.0 manages to add to the scene a bit, but let’s be clear, this isn’t an immersive track by any means.

Actors Commentary:  Of the two commentary tracks that come with this release, this one is the one I had the most fun with.  The cast seems to have had a blast making this film, and they all get along during this track giving us those fun tidbits from the production with little to no dead throughout this track.  I have to say this is one of my favorite commentaries in some time.

The Production Crew Commentary:  Here we have the big man himself Lloyd Kaufman with several producers and the writer Travis Cambell.  Kaufman is a man who knows how to talk and keep things going and never feel boring.  He may be the modern B-movie king, but he has so many nuggets of information to share with the fans of Troma and those shoestring budget horror directors out there.  This too is a fun track to listen to.

Casting Conundrum- (7:07) This is a brief look about what goes into the process of casting for a Troma film.  Everything from the online auditions to seeing the actors go through dealing with nudity.  This is a bonus that is more fun than you would expect.

Pre-Production Hell with Mein-Kauf (Man)- (9:44) A behind the scenes feature that mostly follows the crew as they try to keep the production rolling under the helm of Kaufman.  Some of this Kaufman seems to be playing to the cameras, but at other times we get a glimpse of his genuine frustration as makeup effects seem to be not coming together.

Special (Ed) Effects- (7:22) More of a glimpse at what goes into making the effects in the film.  The hunt for the right prosthetic for the opening sequence is a charming bit on the feature and worth the watch alone.

Cell-U-Lloyd Kaufman- (2:11) A montage of clips from past Troma films from over the past 40 years.

“Architects of Fear” Edison Device Music Video– (3:38) A video by one of the bands that makes an appearance in the film.

After being in the business for 40 years, Kaufman still is the modern king of B-cinema and shares the throne with Roger Corman.  Nuke’em High may not win awards, but this is a fun movie to kick back with a few drinks and enjoy.  Sometimes all a good horror film needs is gore, broads, and a thin message hidden between all the mischief the Cretins manage to get into.  I’m looking forward to seeing what Volume 2 has in store for us all.

Brent Lorentson is a horror writer and film critic based out of Tampa, Florida. With a BA in Digital Film, he co-wrote and co-directed Scavenger Hunt. His short stories have appeared in various horror anthologies. In 2019 his short script Fertile Blood will be a part of the anthology horror film Slumber Party. He is currently working on his first novel A Dark and Secret Place set to be released in late 2019. Favorite Films: Taxi Driver, Fight Club, I Saw the Devil, The Wild Bunch, Dawn of the Dead, A Clockwork Orange, Pulp Fiction, Heathers, The Monster Squad, and High Fidelity.
Veep: The Complete Second Season (Blu-ray) Bad Words