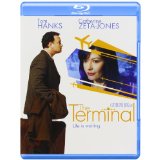 “You are not to leave this building. America is closed.”

That’s certainly a far cry from “give me your tired, your poor…your huddled masses yearning to breathe free.” It’s also the predicament faced by Viktor Navorski, an accidental refugee who falls through a proverbial crack in the system and winds up trapped at JFK International Airport. The harsh, sobering command comes early on in The Terminal, a large-scale, feel-good parable. Even 10 years ago, a tonally-tricky studio movie like this one could only find its way to multiplexes if someone with the clout of a Steven Spielberg or Tom Hanks decided to make it.

Of course, The Terminal was fortunate enough to have both of those Hollywood heavy-hitters in its corner. Hanks stars as Viktor, who travels to New York from Krakozhia, his fictional Eastern European home. While Viktor was en route to the United States, Krakozhia fell into political disarray. The passport issued by his home country has been indefinitely suspended, and the U.S. has revoked his visa. That means Viktor can neither return home, nor is he allowed to set foot on American soil. In other words, Viktor is deemed “unacceptable” in the literal sense of the word. Frank Dixon (Stanley Tucci), the airport’s by-the-book director of customs and border protection, informs Viktor that he can stay in the airport’s International Transit Lounge until his situation gets straightened out.

Viktor and Frank expect the snafu to be resolved overnight, but it ends up taking…considerably longer. During his time in the lounge, Viktor takes up residence in Gate 67 and constructs makeshift meals out of whatever he can scrounge together from the food court. He routinely crosses paths with other airport employees, including eccentric janitor Gupta (Kumar Pallana), cargo handler Joe (Chi McBride), food service worker Enrique (Diego Luna), and Dolores (Zoe Saldana), the immigration officer Enrique is desperately in love with. There’s also Amelia (Catherine Zeta-Jones), the striking, unlucky-in-love flight attendant who catches Viktor’s eye. Viktor’s resourcefulness — not to mention his willingness to wait — eventually changes the lives of those around him.

“Sometimes you have to ignore the rules, ignore the numbers, and concentrate on the people.”

The Terminal is loosely inspired by the story of Mehran Karimi Nasseri, an Iranian refugee who lived in France’s Charles de Gaulle International Airport for 17 years. Although the film somewhat strains to credibly keep Viktor confined to the terminal, this is still a pretty genius idea for a story. People generally try to get through airports as quickly as possible, so forcing a protagonist to spend an extended period of time there subconsciously puts us on his side.

Casting Tom Hanks in the lead role, on the other hand, is a more obvious way of getting us to root for Viktor. When I first watched this film 10 years ago, I thought Hanks was miscast in the role. I still feel like it’s always a little too apparent that Hanks is putting on a performance; the actor basically resurrects his Sabba Price Is Right accent. The difference is I now have a greater appreciation for the way his good-guy movie stardom was deployed here. (This was the third Spielberg/Hanks collaboration, following Saving Private Ryan and Catch Me If You Can.) There’s a strong sequence early on where Viktor is surrounded by hundreds of strangers, but Hanks seems as isolated as he was in Cast Away. Spielberg and frequent cinematographer Janusz Kaminski also deserve an assist on this front, as does the massive terminal set created under the supervision of production designer Alex McDowell. (Kaminski and McDowell should’ve been Oscar nominees for their work here.) Hanks’ plucky performance wins the audience over just as Viktor’s determination is endears him to everyone on the airport. (Except Frank.)

It’s probably no coincidence that some of the sympathetic airport staff are from other countries or can otherwise relate to Viktor’s plight. After all, Viktor’s “man without a country status” is simply an extreme version of getting screwed over by “the system.” The snappy script — credited to Sacha Gervasi and Jeff Nathanson, with Andrew Niccol earning a story credit — has fun with the rainbow coalition of forms Viktor has to fill out so he can try to leave the airport. There’s also a cynical undercurrent that I didn’t notice as much the first time around, probably because it’s not what you typically expect from a Spielberg film. The Terminal may not reference 9/11 directly, but the effects can be felt in the margins of the story. One example is Frank claiming no other agency will take Viktor off his hands because they’ve got their own hands full with all the people they’ve already detained.

Then again, I don’t get the sense Spielberg set out to make any sort of statement on 9/11 here. (That would come the following year with the War of the Worlds/Munich double whammy.) Instead, I believe the filmmaker made a movie about the the moments between life’s major milestones. The result is a variety of vignettes that veer from slapstick (Gupta enjoys watching oblivious travelers slip and fall) to romantic (Hanks and Zeta-Jones crackle together on screen, even if they don’t quite generate heat) and affecting (the reason behind Viktor’s trip to New York is positively Spielberg-ian). These small moments — often with little-to-no dialogue — are the ones where Hanks and a great visual storyteller like Spielberg excel.

The rest of the cast is strong. Zeta-Jones’ flits in and out of the movie, but subverts her sultry screen persona once we learn how flighty Amelia really is. I also liked seeing a pre-stardom Saldana, whose character is a closet Trekkie. (It was fate!) The scene-stealer is Pallana; Gupta is even harder to understand than Viktor, but he serves to highlight the notion that the people you may not notice have rich interior lives. Tucci does heroic work giving his villain character more than one dimension; Frank is in line for a big promotion and goes overboard in doing his job. (Viktor’s not the only one stuck in the same place.) The character only loses his way when the attacks on Viktor become personal.

The Terminal really is an odd duck. It’s an engrossing parable that is equal parts romantic, funny, dramatic and whimsical. Watching it again, I notice it’s also quite sharp, though not so sharp that it risks keeping its audience at arm’s length. By setting its story inside an airport — where practically the entire planet is represented at a micro level — it shows us the world as it is while making a case for a more compassionate alternative.

The Terminal is presented in an aspect ratio of 1.85:1. The 1080p image is arrived at with an AVC MPEG-4 codec at an average of 32 mbps. I was honestly a little taken aback by the heavy grain structure that is evident early on. Don’t get me wrong: the last thing I want to see is an image that’s been DNR’d into oblivion. But a few early scenes here — with some muted color to go along with the heavy grain — looked barely above DVD quality.

Thankfully, the Blu-ray rallies and quickly settles into what is a pleasing baseline visual presentation that is alternately clear and bright. More importantly, it retains a good amount of that grain, which gives the image — particularly Viktor’s evolving wardrobe — some texture. Black levels are excellent here, particularly during the only scene Zeta-Jones and Tucci share: Frank is shown in a foreboding shadow, while Amelia is bathed in a beatific light. (Bravo Kaminski!) Most importantly, strong color and contrast help make the vibrant terminal set feel like its own ecosystem.

The DTS-HD Master Audio 5.1 track, on the other hand, is an unequivocal smash success. Dialogue is confined to the front, which frees up the rest of the surround field to bring the terminal to thrilling life. Rear speakers are always alive with the constant din of noise. That din is periodically interrupted by dynamic, immersive sounds, like flight announcements or the clatter of the informational board being updated. It’s all balanced extremely well; in fact, the only time the track feels a bit aggressive is during transitional scenes that bring the roar of a jet engine a little too close to the fore. (Though that may be a sound editing/mixing issue.) John Williams jaunty, emotional score is treated as thoughtfully by the track as everything else. A very impressive effort.

Only the photo gallery and theatrical trailers appear in high definition. The rest of the bonus material is ported over from the film’s previous DVD release.

Booking the Flight — The Script, The Story: (8:06) Spielberg talks about the idea of airports as a microcosm for society, as well as the instant relatability of the story. (Everyone’s been to the airport.) Meanwhile, co-writer Sacha Gervasi reveals he lived in various airports while researching the script.

Waiting for the Flight — Building The Terminal: (12:19) Production designer Alex McDowell (Minority Report) and his massive set take center stage. There wasn’t a space big enough in Hollywood to accommodate the terminal set, so filmmakers utilized an old hangar in Palmdale.

Boarding — The People of The Terminal: (31:48) This a trio of cast profiles, including “Tom Hanks is Viktor”, “Catherine Zeta-Jones is Amelia”, and “Viktor’s World”, which takes a look at the supporting cast. Hanks said this is the most improv he’s ever done on a Spielberg movie, while Zeta-Jones is thankful the director noticed her in a made-for-TV Titanic movie she made in the ’90s. Features a Play All option.

Take Off — Making The Terminal: (17:13) This “Making Of” feels a little redundant given all the other featurettes included. The filmmakers address the film’s tricky tone and the complex nature of the production.

In-Flight Service — The Music of The Terminal: (5:53) We see session footage of the legendary John Williams, who excitedly talks about creating a theme for each character and incorporating a more ethnic texture for this project.

The A/V improvements on this Paramount Blu-ray are good enough to merit an upgrade, even if you already have the DVD in your collection. I actually liked this film more the second time around. I don’t know that most people will rank it among Spielberg’s best, but if it fell through the cracks for you when it was released a decade ago, make sure you check it out now.