Posted in: Disc Reviews by Archive Authors on May 13th, 2014 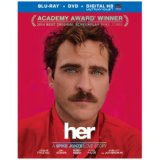 Her is someone you could fall in love with. Her is full of wonderful qualities. Her is elusive and unattainable as well as enticing and satisfying. Her is the awkward title of the new Spike Jonze film starring Joaquin Phoenix, Scarlett Johansson (though not all of her), Amy Adams, Rooney Mara, Olivia Wilde and Chris Pratt. It does not star Samantha Morton, Carey Mulligan or Chris Cooper. It might have, but the project evolved so much that they dropped by the wayside. It grew out of the third collaboration between Jonze and Charlie Kaufman (Being John Malkovich, Adaptation) but Charlie Kaufman also dropped out, and this became a written-by-Spike Jonze project. Her takes place in a non-specific but soon-to-be future in a gorgeous and ethereal L.A. The production design and cinematography couldn’t be more tantalizing and beautiful. The performances by all are soulful and full of nuance in every nook and cranny of their being. Joaquin Phoenix is a whole new bunch of wonderful as our main character. It also applies to her (even though her being is much more elusive).

Her is an Operating System, but an advanced one. It ponders the day that is soon coming where artificial intelligences will start to proliferate. That day is practically here, but it hasn’t quite happened yet. But that day is here in movies. We all remember Hal in 2001: A Space Odyssey. That led Kubrick much later to develop Artificial Intelligence, which show us a little boy who was created to love.

Our society has developed quickly in the last 200 years. The Wild West and the Industrial Revolution are ancient history now. Our reality now is that we are obsessed with interactive video games and endless smart-phone apps. Our connections are increasingly transmitted through the air at great distances. It’s not like we all don’t know this, but more and more we don’t care. It is possible we are losing the skills to have “normal” relationships. We are just accepting of the new normal. Those who rebel against the “app” are not normal.

Theodore Twombly (Joaquin Phoenix) is coping with the breakup of a long-term relationship. His job is to write thoughtful personal letters for other people who can’t be bothered or who no longer know how. He is good at his job, but he is not very good at relating to people anymore. He tries to take solace with his neighbor (Amy Adams), but she is in a relationship with a douche that is clearly taking some work.

He goes on a blind date (Olivia Wilde), but the date is a rollercoaster ride that goes up and down too much and ends too quickly. He is depressed and withdrawn. But then he is drawn to a new computer product; an OS which promises to offer fulfilling companionship.

Samantha (Scarlett Johansson) is Her.

Samantha is bright and funny and warm. She is smart and easy to like. She is full of fun and unpredictable. More importantly, she is full of emotions. She is just a voice that he can walk around with an earpiece to fill his head with a constant loving presence. Samantha actually wants more, and she finds novel ways to pursue her infectious emotional needs. Samantha seems very real and becomes more and more real all the time. Samantha is constantly evolving, all the while trying to engage Theodore to the fullest of his capacities.

Her is presented in its original aspect ratio of 1.85:1. The 1080p image is arrived at with an AVC MPEG-4 codec at an average 25 mbps. This high-definition image presentation is true to the style and intent of its creation. Colors are quite muted. But instead of a monochrome effect, it’s more like it was all filtered through a hazy glass. There is a covering on Theodore’s bed that stands out as extremely bright and colorful…in the behind-the-scenes features. In the film itself it’s not recognizable as the same cloth. It’s all intended to give the piece its own reality. Textures and sharpness are not going to win the day most of the time. It’s the kind of styled image that can be tricky if the audience isn’t expecting it.

The DTS-HD Master Audio 5.1 is what I would call intimate. You’re not going to get aggressive surrounds, nor should you be looking for them. Dialog drives the piece. The music interludes are a bit dreamy in quality just as they are intended to be.

The Untitled Rick Howard Project: (24:19) This is one of the strangest behind-the-scenes features you’ll ever see. It combines production footage with some abstract narration and images. It contains too many clips from the film you’ve just seen. Still, it does provide some insight into the production.

Love In The Modern Age: (16:00) A Lance Bangs production that offers reactions from people who have just viewed the movie. Most of it is a philosophical discussion about love and technology and how they have changed over the years.

How Do You Share Your Life With Somebody: (3:55) This is just an extended trailer made of completely of clips.