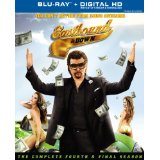 “This is the story of a man who won by choosing love over fame, fortune and countless adventures…”

Danny McBride managed in inhabit the role of Kenny Powers to such an extent I do appear to have trouble keeping them separate. Now the countless adventures continue for McBride who is going to have to get us all to see him in a new light as he leaves troubled Powers behind and moves on to other things. For fans it’s a bittersweet goodbye to Eastbound & Down. The final episodes have aired and now they are available on this 2-disc Blu-ray swansong.

Meet Kenny Powers (McBride). He was a talented pitcher for Atlanta. He’s the stereotype of every self-centered athlete we’ve ever seen. He cares only about himself and has no respect for the people around him, and that obviously included his teammates. His attitude got him in hot water with the commissioner and out of Atlanta. He ended up as a teacher in a local high school where his antics didn’t go over any better. Whoever thought this egomaniac with the toilet mouth belonged in a room with kids was probably on crack at the time. He was about to go to Tampa to play for a new team. So he’d packed up his life and girlfriend April (Mixon) to start their new lives in Tampa, when the hammer fell and the deal fell through. What does Powers do then? He leaves April standing in a gas station parking lot and heads out of Dodge. So where did Powers go?

The second season began by answering that question. We find that Powers has settled in Mexico where he considered himself somewhat of an outlaw. He’d taken on the identity of “Steve”. Powers ends up joining the local baseball team in order to create some buzz that he still has what it takes to pitch.

The third season found Powers back in the United States and on track for a huge comeback, pitching for the Myrtle Beach Mermen. It didn’t take long before he was up to his old politically incorrect antics. Now he has a 1-year-old son. When April just can’t take it anymore, she dumps Toby on Powers and splits. He has to figure out how to be a father. That means getting Stevie back on his team.

Now we enter the fourth and final season for Powers and Eastbound & Down. Believe it or not Kenny has been trying to live the average suburban life. He’s got a house with April and the kids. He does Spaghetti Night with the normal neighbors, and he works in a shirt and tie as a rental car clerk. He has lost his baseball career and barely escaped life insurance fraud by faking his death. Could this be the new Kenny Powers?

Of course not. It doesn’t take him long to lock on to another chance at stardom. This time he’s traded the stadium lights of baseball for the white-hot spotlights of television. He’s invited by former Braves teammate Guy Young (Marino) to guest on his sports-talk variety television show. Young’s trying to bring down one of the panel members who has started to get a little too much attention. Yeah, it works, but he must have been high on crack if he didn’t see Kenny Powers making the same moves. Young is destroyed by his own weapon, and Powers is back on top, baby. Kenny’s tiresome “Kenny’s Cuttin’ In” act brings the two to a showdown. Who do you think’s going to win that one? Kenny, of course, but it’s the beginning of the end as once again he lets it all go to his head and he spirals into another self-destructive crash-down.

Danny McBride is also a writer and producer on the show. You’d think that it was a one-man effort, but it most certainly is not. McBride’s character would get old fast if not for the solid performances around him. The team here understands quite well how much gold you can mine with the right cast and situations. His racist remarks might just be shocking if not for the mixed ethnic cast that he’s playing to here. It’s like they understand him, and somehow it’s no longer shocking but somehow safe to laugh at, and laugh you will. How he treats his friends and women would be a bore if not for the people who populate these positions in his life. The show’s loaded with “straight men” who make McBride’s performance that much better. There’s certainly a line here, and Eastbound And Down dances all over it.

Each episode is presented in its original aspect ratio of 1.78:1. The 1080p image is arrived at with an AVC MPEG-4 codec at an average 20-25 mbps. The picture looks almost too good for a comedy. The Myrtle Beach scenes contain a ton of texture that puts more reality into this image than we might be used to for a comedy show. We’re talking solid colors that jump out at you at times. There’s plenty of surfing going on at the beach. The black levels are solid and display a wonderful range of shadow definition. Close-ups are almost painfully sharp on those faces.

Audio Commentaries that are often as funny as the show.

Deleted/Extended Scenes and a gag reel.

So this is my last tour of KP duty, and I’m going to miss the guy. HBO’s going to miss the ratings, but something tells me they’re doing just fine. The series finale is a good one in the wake of so many disappointing series endings (Dexter and Sopranos to name a couple). There’s true closure for all. “In the end Kenny Powers didn’t get what he wanted, but he got what he needed.”

Gino Sassani is a member of the Southeastern Film Critic's Association (SEFCA). He is a film and television critic based in Tampa, Florida. He's also the Senior Editor here at Upcomingdiscs. Gino started reviewing films in the early 1990's as a segment of his local television show Focus. He's an award-winning recording artist for Omega Records. Gino is currently working on his 8th album Merchants & Mercenaries. Gino took over Upcomingdiscs Dec 1, 2008. He works out of a home theater he calls The Reel World. Favorite films: The Godfather, The Godfather Part II, The Body Snatcher (Val Lewton film with Karloff and Lugosi, not the pod people film), Unforgiven, Gladiator, The Lion King, Jaws, Son Of Frankenstein, The Good, The Bad And The Ugly, and Monsters, Inc.
Generation Iron Million Dollar Arm