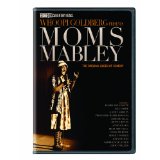 Jackie Mabley, the trailblazing subject of this HBO Films documentary, earned plenty of superlatives during a comedy career that spanned more than 50 years. She was touted as “the funniest woman in the world.” The DVD cover art crowns her as “the Original Queen of Comedy”, and one of the film’s interview subjects calls her “the original cougar” thanks to her on-stage predilection toward younger men. Of course, Mabley would probably prefer it if you just called her “Moms.”

Whoopi Goldberg Presents Moms Mabley examines how the comic shattered gender and racial boundaries. The list of comedians she influenced — and who lined up to offer their thoughts for this movie — includes Bill Cosby, Eddie Murphy, Arsenio Hall, Joan Rivers, Kathy Griffin, Jerry Stiller and Anne Meara. (Murphy admits Granny Klump from The Nutty Professor was a direct nod to Mabley’s stage persona.)  Sidney Poitier turns up to praise her material as “familiar and honest.” Leading the charge is actress/comedian/talk show host Whoopi Goldberg, who used to recreate Mabley routines on stage early in her own career.

The 71- minute film is also Goldberg’s directorial debut. Early on, Goldberg admits she couldn’t find enough information on Mabley to make a proper biographical film. For example, we know Mabley was born Loretta Mary Aiken in Brevard, N.C., but nailing down a birth year proved to be much trickier. The film suggests she may have been born in 1897, while Wikipedia (1894) and other parts of the Internet (1899) can’t seem to agree.

As a result, the movie is less a comprehensive look at Mabley’s life and more of a career appreciation. The documentary brushes up against some dark, interesting details from her personal life, but is both unable and unwilling to examine them in-depth. Whoopi and Arsenio discuss a rumor that Mabley had been raped twice, but quickly brush it aside. More intriguingly, swing dancer Norma Miller — who often performed at the Apollo Theatre in Harlem at the same time as Moms — talks about how Mabley had girlfriends and liked to wear men’s clothes off-stage, earning her the nickname “Mr. Moms.” The movie leaves out any mention of Mobley’s children.

Fortunately, Goldberg and the rest of the commentators do a marvelous job of putting the comedian’s impact on pop culture and showbiz history in its proper historical context. The film shows how Mabley worked her way through the black vaudeville circuit in the 1920s to becoming the first female comic to be featured at the Apollo in the late 1930s. The documentary also includes the earliest known footage of the comedian, her performance in the 1948 film Killer Diller. Mabley made her television debut in 1967 on The Smothers Brothers Comedy Hours, and went on to appear on The Merv Griffin Show and The Ed Sullivan Show in subsequent years. There is also footage from her last movie, 1974’s Amazing Grace. The doc sprinkles in audio recordings of Mabley’s routines accompanied by animated subtitles, which help highlight the clever wordplay. (Sample: “You shouldn’t say something about the dead unless it’s good. He’s dead? Good!”)

Mabley began playing the elderly, cantankerous “Moms” when she was a very young woman and maintained the character for more than 50 years. (Think Vicki Lawrence’s “Mama.”) The plain-spoken character always shuffled on stage wearing a garish housecoat, a floppy hat, and no teeth. Rivers and Griffin note that female comedians have to present themselves as harmless on stage. (You’re not likely to see a comedienne in the female equivalent of Eddie Murphy’s leather Raw suit, for example.) In other words, this was Moms Mabley’s way of literally defanging herself.

The material itself, however, was anything but toothless. Mabley used her disarming stage presence to explore hot button political issues in a direct manner that didn’t immediately put audiences off. In 1969, she recorded a version of “Abraham, Martin, and John” — a tribute to Lincoln, MLK, and Kennedy — and became the oldest person to ever score a top 40 hit. (Despite the fact that no one seems to know exactly how old she was.) The film features Moms singing a poignant rendition of the song at the request of Sammy Davis, Jr. on Playboy After Dark. I also got a kick from watching her make Merv Griffin sweat on live TV by pretending to mishear the word “trigger.”

To be honest, I wasn’t at all familiar with this showbiz pioneer before I sat down to watch this documentary. Whoopi Golberg Presents Moms Mabley — aka Moms Mabley: I Got Somethin’ to Tell You — may not delve deep into its subject’s personal life, but it does a fine job of showing what made her so funny…and important.