Posted in: Disc Reviews by Brent Lorentson on May 21st, 2014 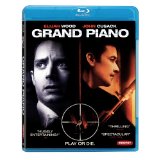 Ever since Elijah Wood completed filming Lord of the Rings, it would seem that he has done everything in his power to not be locked down with the label of simply being Frodo.  From playing a mute psychopath in Sin City, to voice work in Happy Feet, a suicidal pot-head that is best friends with a talking dog in Wilfred, and even the killer role in Maniac, it’s clear that he’s an actor that likes to challenge himself.  With Grand Piano Wood delivers his most dynamic performance as the brilliant concert pianist Tom Selznick who suffers from stage fright.  It’s a film that didn’t see much of a theatrical release but shone in the film festivals it did play at, most notably Fantastic Fest in Austin, Texas.  But it’s not just the performance that sells me on this film; instead, it’s the beautifully shot and constructed thriller that seizes its grip from the opening moments of the film and doesn’t release until the end of its 90-minute-plus running time.

It’s been five years since Tom has performed for the public, ever since his meltdown while trying to perform a piece written by his mentor Patrick Godureaux.  The piece titled, “La Cinquette” is believed to be an unplayable piece and is considered to be Godureaux’s master work.  But it’s on this one night, an event organized by Tom’s wife Emma (Kerry Bishe), a Hollywood socialite who has bloomed into superstardom during Toms retirement; the event has been put together to help Tom recover from his disastrous performance.

Tom is anxiety-ridden but still takes the stage to overcome this intense case of stage fright.  And the performance starts off fine until he comes across a note scrawled on a sheet of music, “Play one wrong note and you die.” As a dot appears upon his hand from a sniper rifle from within the theater the urgency of the situation sinks in and nearly cripples Tom on stage.

John Cusack takes on the role of the sniper, and for a good majority of the film he is simply the menacing voice in Tom’s earpiece.  Sure, the film has its easy comparisons to Phonebooth as well as Speed, but as I watched I couldn’t help but feel director Eugenio Mira had somehow managed to tap into Alfred Hitchcock and execute this tight thriller.

For some the idea of just watching a guy play the piano being thrilling might seem like a stretch, but it is a testament to the quality of the script and direction that makes this film work so well.  The camera seems to never sit still as it weaves through the concert hall.  With the long shots and practically real time pacing of the film, there never seems to be a wasted moment as the film moves along.

It’s the action that happens behind the scenes of the stage performance that picks up the slack and gives the audience more to watch.  Seeing how Tom tries to call for help from the stage while Clem (Cusack) watches from his perch somewhere in the balcony is a delight, but Clem is not alone on this mission, and it’s his assistant who attempts to tie up the loose ends during the concert.

The motivation as to “why” Tom is being singled out and told to play the music perfectly or else, that is one of those reveals I feel people will either love or hate.  Personally I thought the setup was great and offers up so many questions that just kept me guessing.

Grand Piano is presented in an aspect ratio of 2.40:1.  The 1080p image is arrived at with an AVC M-PEG 4 codec at an average of about 26mbps.  This is a very saturated film where the two colors that seem to appear throughout and usually together are red and black.  The richness of the red is present through all of on stage performance in the carpeting and the curtains.  With the amount of CGI used in the film, it helps that the audience is mostly covered in darkness to possibly conceal any gaps in detail.  There were no artifacts or banding issues that I noticed.  With the numerous camera tricks, it’s impressive that we always maintain a large amount of detail with the actors’ faces as well as most impressively the hands on the piano.  One of my favorite shots is actually a simple rack focus of Elijah Wood reflected in the piano.  This just looks beautiful.

The DTS Master Audio 5.1 track is a beautifully executed mix here.  Considering the director has a music background, it’s no wonder the film has such a well-balanced mix.  The music throughout plays hand in hand with the action and drama on the scene but is so well orchestrated with the movement of the camera, it’s a piece of visual/musical art.  Balancing the dialog from Tom’s earpiece to the music being performed is done so that throughout the dialog remains clear, yet the music is never missed.  Even as Tom is frantically leaving the stage as the orchestra plays on, the separation and tone are maintained.

Interviews with Elijah Wood and director Eugenio Mira: (34:24) You have the option to watch both interviews back to back or watch them separately.  The insight these two offer up is filled with plenty of information and makes up for the lack of a commentary.

Soundtrack: (3:28) An all too brief look at what went into constructing the score for the film.  Music is so essential to this film, and this is a feature I wish stretched on longer.

Coaches: (5:01) This is a fun look at the actors going through their training to make them actually look the part.

Following Eugene: (4:56)  A look at the antics of the director throughout the production.

Stunts: (4:07) We get a chance to see the actors rehearsing one of the big action sequences that takes place during the film’s climax.

Visual Effects: (3:56) Here we get to see the movie magic at work creating this beautiful theater house that doesn’t really exist.

Wayne’s Shot: (4:33) For those that haven’t seen the film, it’s simply an in-depth look at how they executed a technical shot that calls back to old-school Brian De Palma and especially Alfred Hitchcock.

AXS TV a Look at Grand Piano: (2:52) A trailer mash-up with snippets from interviews with the cast involved in the film.

I absolutely had a blast with this film, and I’m already looking forward to watching this again with friends.  I know some people will watch this and think I’m off my rocker, but I love that this film keeps everything so simple and executes such a beautiful-looking thriller.  If Hitchcock were around today with all the technology we have around at our fingertips, this is the film he would make.  And honestly, I can’t think of a higher praise than that to give a film.

Brent Lorentson is a horror writer and film critic based out of Tampa, Florida. With a BA in Digital Film, he co-wrote and co-directed Scavenger Hunt. His short stories have appeared in various horror anthologies. In 2019 his short script Fertile Blood will be a part of the anthology horror film Slumber Party. He is currently working on his first novel A Dark and Secret Place set to be released in late 2019. Favorite Films: Taxi Driver, Fight Club, I Saw the Devil, The Wild Bunch, Dawn of the Dead, A Clockwork Orange, Pulp Fiction, Heathers, The Monster Squad, and High Fidelity.
3 Days to Kill (Blu-ray) Whoopi Goldberg Presents Moms Mabley