Journey to the West (Blu-ray)

Posted in: Disc Reviews by Brent Lorentson on June 2nd, 2014 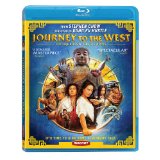 When Stephen Chow came out with Shaolin Soccer and Kung Fu Hustle he delivered martial arts in a way like we never had seen before.  It’s not just that he blended humor with his action but it was that he was able to manage to make his characters function as you would imagine cartoon characters would in the real world.  The road runneresque chase scenes from Kung Fu Hustle are the first visuals that come to mind any time I think of the name Stephen Chow.  Now that he has Journey to the West making its way to Blu-ray, does he still have what it takes to make a hit or has he simply returned to the well already?

The film starts off strong as a father is attacked by some unseen monster while his daughter looks on from a dock.  As panic strikes the village a “demon hunter” captures a giant sting ray that he believes is the culprit behind the fisherman’s death.  Sanzang (Zhang Wen) seems to believe that there is yet another demon responsible for the death, yet to the village refuses to take Sanzangs advice and it is a mistake that will result in the loss of more lives and destruction.  This opening goes on perhaps a bit long but it sure is fun and is filled with some beautifully choreographed stunt work as well as some inventive camera work.

As for Sanzang, he’s a drifter that aspires to be a great demon hunter, unfortunately he just doesn’t have the skill set to really do much about actually fighting the demons he encounters.  Lucky for him there is Miss Duan (Qi Shu), she has quickly developed a crush on Sanzang, as they cross paths though he continues to thwart all her advances.  After all Sanzang has shown his allegiance to the great Buddha and nothing can come between that and his ability to “fight” demons.  Miss Duan though doesn’t take no for answer or give up to easily but it’s her skill with her metal bracelet that makes her a threat.  When we get to see her do battle up against a hog demon for the first time, I put it right up there with some of the various cartoonish Chow has done before with Kung Fu Hustle.

Just as Chow did with Kung Fu Hustle we also get a quirky mix of characters, each with their own particular skill sets for battle.  It’s the relationship with Sanzang and Duan that is somewhat the heart of the film though it’s hard to root for a guy that seems to constantly reject this woman who seems to care for him, and really for no better reason than she believes he is different from most men.  But Chow never allows for the romance to blossom and instead focuses more attention on the goofy, slapstick humor we come to expect as well as some excellent fight choreography.

Where I’m absolutely in love with the film is the overall look of the film.  This crazy over the top fantasy world that Chow has realized is breathtaking a times.  The creature visual effects I still have a hard time deciding how I feel about them.  Not for a moment did I believe that these were anything more than CGI creatures.  Knowing after the fact that the film had be originally released in 3D I have to wonder if seeing it in that format would help any, but since only the 2D version is available I have to go by my impressions from that.  There is a lot of blue screen effects for some fantastic looking sets and it does help in creating this magical world Chow is putting on display for us but at times it does feel as though it is a bit much, even in a film that seems to shine at the idea of over the top and excess in visuals.

Though I don’t find the film as fun or as ground breaking as Kung Fu Hustle, Journey to the West is still a really fun film with a great opening sequence.  The film does leave it self-open for sequels and I would like to see where Chow could take these characters from here.

Journey to the West is presented in an aspect ratio of 2.35:1.  The 1080p image is arrived at with an AVC MPEG-4 codec at an average of 32 mbps.  This is a beautiful Blu-ray release.  The world that we get here is a beautiful world of fantasy where everything seems to be sharper, more crisp and just pop.  It’s a beautifully realized fantasy world, from the moment it opens in the cove with its aquamarine colors that just pop from the sandy stone village.  The detail is just incredible, from Sanzangs frizzy hair to the rich texture we see through the caves.  This is an instance where the viewer can really take in the detail and work put in by the production designers, costumes as well as the CG effects.

The DTS Master Audio 5.1 Mandarin track is the preset track with English subtitles but you are given options in the set-up menu where you can go for an English dubbed track as well.  This is a mix where its high points come with each of the fight scenes.  Whether it’s the fight in the restaurant where we have Miss Duans rings pinging from all around, or  the screams of the Monkey King during one of the film’s final battles the experience is immersive.  Having listened to some of the dubbed track the voice cast actually does a good job with the line deliveries and keeping the timing while not being distracting or noticeable.

Behind the Scenes Featurettes: (12:12) With the option to play all we get little brief snip-its of behind the scenes footage of the making of the film, everything from the stunt work to the special effects involved.  The all too brief moments of getting to see Chow working with the performers is the highlight for me.

Though I had more fun with Kung Fu Hustle, this film is still a fun little adventure where we get to see Chow show off his wild imagination behind the camera.  I think with a few more viewings the film may grow on me some, though I am hopeful for a sequel to come out of this.

Brent Lorentson is a horror writer and film critic based out of Tampa, Florida. With a BA in Digital Film, he co-wrote and co-directed Scavenger Hunt. His short stories have appeared in various horror anthologies. In 2019 his short script Fertile Blood will be a part of the anthology horror film Slumber Party. He is currently working on his first novel A Dark and Secret Place set to be released in late 2019. Favorite Films: Taxi Driver, Fight Club, I Saw the Devil, The Wild Bunch, Dawn of the Dead, A Clockwork Orange, Pulp Fiction, Heathers, The Monster Squad, and High Fidelity.
Beyond the Trophy Robocop (Blu-ray)