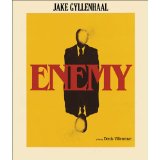 What would you do if you spotted your exact duplicate? Would you take a closer look so that your brain could try to confirm what your eyes were seeing? Check with your parents to make sure you didn’t have a long-lost twin they never told you about? And how long before you pinched yourself to ensure you weren’t dreaming? These were the sorts of questions that popped in my head as I watched Enemy, a stylish and mind-bending psychological drama.

The movie, which re-teams French-Canadian filmmaker Denis Villeneuve with his Prisoners star Jake Gyllenhaal, is based on Jose Saramago’s 2002 novel “The Double.” It’s the story of Adam Bell (Gyllenhaal), a bored history professor who gives the same lectures — and appears to make love to his girlfriend Mary (Melanie Laurent) in the same way — over and over again. While watching a movie recommended by a colleague, Adam notices one of the actors playing a minor role looks exactly like him. After a little online research, Adam figures out the actor’s name, visits the talent agency that represents him, and eventually calls him at home.

Turns out Enemy is also the story of Anthony Claire (Gyllenhaal again), a small-time actor with a pregnant wife named Helen (Sarah Gadon). Anthony is initially put off by Adam’s frantic calls. But as the story progresses, we learn there are interesting parallels in Adam and Anthony’s lives. (They share anxieties related to their alluring, blonde significant others, as well as strong feelings about blueberries.) Eventually, the two men agree to meet in person.

“Chaos is order yet undeciphered.”

I don’t want to say too much more, and it’s not because I’m afraid of giving anything away. Enemy doesn’t offer a concrete explanation for Adam and Anthony relationship, so it’s pretty difficult to spoil what happens in this film. The true pleasure comes from watching the way Villeneuve and writer Javier Gullon have crafted a story that can credibly support multiple interpretations. Is there a real-world reason for their connection, or is it more metaphorical? (It’s weird that Adam and Anthony happen to live in the same city and sport the same bushy beard, right?) Are Adam and Anthony twins separated at birth, or the same person at different points of their lives? All of these scenarios (and more) are in play.

At first, it appears like the story will be told from Adam’s perspective. So the most important step in constructing the film was giving equal time to both Adam and Anthony before the audience even realized they were getting equal time. Enemy opens with a voicemail that doesn’t have a clear recipient followed by one of the two Jakes visiting an erotic underground club. We’re not quite sure who we’re watching in those mysterious opening minutes, which establish the film’s spider motif. Villeneuve also employs subtler visual clues and tricky edits that invite repeat viewings. (So you can spot them.)

Obviously, casting a capable lead actor is crucial for any film; it becomes doubly important when that performer has to tackle two roles. I thought Villeneuve brought career-best work out of Gyllenhaal in Prisoners, and the collaboration continues to be fruitful here. The actor convincingly portrays two separate characters by adjusting his posture and modifying the authority in his voice. Gyllenhaal can obviously pull off looking like Anthony the actor, but his hooded, expressive eyes serve him just as well when he’s playing the shaggier, wearier Adam.

Laurent and Gadon alternate between being interesting matches and foils for Adam and Anthony, especially when the two men’s lives become intertwined. I was especially impressed by Gadon, who brings an emotional and relatable humanity to the nutso proceedings. Isabella Rossellini also pops in for a quick, effectively ambiguous scene as Adam Anthony someone’s mom.

Enemy features one of most WTF-worthy final few moments of any movie in recent memory. It’s a startling capper to a film some will find totally mesmerizing and riveting, while others might get frustrated or nod off. Personally, I don’t think the film worked on a logical level. Fortunately, the dream-like dread and isolation Villeneuve created for Adam and Anthony made me more willing to suspend my pesky logic for 90 minutes.

Enemy is presented in an aspect ratio of 2.40:1. The 1080p image is arrived at with an AVC MPEG-4 codec at an average of 21 mbps. Villeneuve works with a golden yellow tint that typically signifies warmth and brightness. With this film — and on this disc — that same hue takes on an intentionally chilly and unsettling role. The presentation also offers decent detail on close-up and medium shots, while the cloudier wide shots reveal more of the off-kilter landscape. Black levels are necessarily inky, particularly during that pitch-black opening sequence in the underground club. The presentation here may not be eye-popping, but — like the film itself — it was diligent and engaging enough to make me want to look twice.

The DTS-HD Master Audio 5.1 track is a strong showcase for Danny Bensi and Saunder Jurriaans moody, dissonant score. As Adam/Anthony’s state of mind devolves, the music becomes more urgent and aggressive, dominating every bit of the surround sound field. Rear speakers are used (effectively) as a supplement more than they are to immerse the audience. There are significant stretches of time without dialogue, but what we do get is clear and confined to the front speakers.

Lucid Dreams: The Making of Enemy: (17:22) This is the only special feature on this disc, but at least it’s a really good one. Cast and crew talk about the movie’s themes (and what each of them think the spiders represent). The actors reveal they signed on while the script was still in flux, while Villeneuve and his crew admit to purposefully blurring logic and encouraging ambiguity in the story. This “Making Of” also covers the technical part of having Gyllenhaal act with himself on screen. A more in-depth commentary would’ve been ideal, but I have a feeling this interesting, genial featurette will be pretty reassuring for anyone who was scratching their heads. Presented in HD.

The truth is this film isn’t for everyone. If you need to have a reasonable, logical explanation to everything that happens in a movie, chances are you’re going to be miserable. And I don’t totally blame you. Movies shouldn’t be homework, so why should you *have* to go on the internet to help figure out what you just watched?

Well, I happen to be the kind of movie nerd who likes thinking about interesting movies long after the end credits have rolled. Enemy is absorbing and put together in a way that invites close examination, repeat viewings, and multiple interpretations.

Ernest & Celestine (Blu-ray) Contest: Win In The Blood on Blu-ray From Anchor Bay