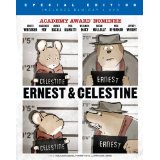 “A mouse can only be friends with a bear in a fairy tale.”

And that’s exactly what we have here. Ernest And Celestine is a charming little tale told through a wonderful watercolor world of animation. It certainly looks very much like the storybooks I remember reading from as a small child. Indeed, the film is based on a series of book from Belgian artist Gabrielle Vincent. The first book appeared in 1981 and continued for 20 years, delighting children the world over. As an artist it makes some sense that the books had a very unique visual style. The stories were brought to life as much if not more by the images than the words of the stories themselves. It’s a world that is captured perfectly by the feature film.

This movie is obviously taken from the earliest of the books and serves as an origin story should the pair be featured in future films. This is the story of two worlds that live side-by-side (OK, up and down) from each other. There is the surface world of bears. They represent pretty much human society. They live in familiar houses. Drive recognizable cars. Live relatable lives. Beneath the bear world is that of mice. They also live in a human-like world complete with buildings and roads. From early on children mice are taught to fear bears. They are told horrible stories of bears wanting to eat young mice in all manner of uncivilized ways… including raw and alive. The bears also have a fear/loathing for the mice.

Enter Celestine (Foy). She is a young mouse studying dentistry. It’s a very noble and popular profession in the rodent world. Her heart is not in being a dentist. She likes to draw and paint and would rather be an artist, but the mouse world is a very practical world, and there appears to be little room for an artist or dreamer. The problem is she’s not very good at dentistry. One of the most important jobs involves invading the bear world to steal teeth, which are used in shaping replacement teeth for the mice. The result is also a bit of a mythology among the bear population where mice take the place of our tooth fairy. It’s actually quite a symbiotic relationship, as long as they don’t have to actually interact.

One night on one of her forays, Celestine is trapped in a bear trashcan. This is where she is met by Ernest (Whitaker). He’s a bit of a failure as a bear and is hungry. He tries to earn a few coins as a one-man band but only ends up hassled by the police. When he first encounters Celestine in the can, he attempts to do what he and Celestine both figure a bear should do. He looks to eat her. She talks him out of it, instead pointing him to the basement of a candy store where he eats his fill but ends up in even more law trouble. Both end up in trouble and do their best to help each other out. The result finds them hiding from the law of both worlds with each caught by the opposite police. Refusing to turn the other in, both end up close to severe punishment, which includes beheading mouse traps.

Of course, no one gets executed, and the two friends end up teaching their respective worlds a little bit about friendship. They end up together where they would enjoy many other adventures chronicled by the many books and hopefully a follow-up or two to this film.

There’s almost a Dickens quality to the story. These characters appear as merely simpler versions of characters like Oliver Twist, David Copperfield, or Little Nell. When you combine the simple but effective animation style, you get something that feels far more vintage and classic than it actually is. That creates a sense of timelessness that works quite well. There’s little to date the piece. The designs of the world are simple enough that it could be almost any place or time. It was easy to pretend I was watching something from my own childhood. It’s a world Milne would have been proud of and obviously inspired by the Winnie the Pooh books.

There are French and English versions of the film, and I viewed the English one. The animation is exactly the same. All of the signs are in French, but this version had an English-language voice cast with the likes of Forest Whitaker, Lauren Bacall, William H. Macy, Jeffrey Wright and Paul Giamatti. It’s an impressive cast for an alternate language release. While the film didn’t really enjoy much commercial notice in America, it was nominated for Best Animated Film at the Oscars. That award went to Frozen, of course, and while I loved that film, it was a multi-million-dollar budget, while Ernest And Celestine was produced on a very modest scale. The nomination itself is impressive, and now there’s a chance for American audiences to take a look at this little film that could.

Ernest And Celestine is presented in its original aspect ratio of 1.85:1. The 1080p image is arrived at with an AVC MPEG-4 codec at an average 25-30 mbps. It would be awfully hard for anything to go wrong with this high-definition image presentation. The animation is quite simple. There’s a texture here that makes it truly look and feel like a storybook. The watercolor animation was done on computer with the backgrounds being hand-drawn. They combine for a unique experience that delivers a sharp enough image to see the swirls in the colors from time to time. Of course, by its very nature watercolor is soft with no real bright stand-out color. There’s no flash or fluff. But whatever you’re really looking for…it’s in there.

The DTS-HD Master Audio 5.1 is available in both English and French. I opted for the English. It’s pretty much straightforward dialog here, and that’s just fine with me. The music is simple, usually piano or accordion, and acts as an accent to the experience.

The Making Of Ernest And Celestine: (51:58) This is in French with English subtitles. There’s early conceptual art here, and the crew offers us a rather personal look at their approach to the material.

Interview With Director Benjamin Renner: (13:55) He answers text-displayed questions all in English.

Feature-Length Animatic: This is an early animation draft of the entire film. It’s only available in the French and can be tedious to anyone but the serious animation technical student.

I hadn’t heard of these books. I’m too old to have been exposed to them as a child. My understanding is they are much better known in Europe than here in The United States. I think the relative obscurity of the material actually helped it for me. I didn’t have any expectations or images already ingrained in my mind, and I honestly found the experience much like sitting down with an old-time storybook. It’s rare to have that kind of feeling these days, and I heartily recommend you try it out yourself. If this doesn’t bring out the innocent kid in you, then you’re likely a serial killer or anyone who believes that “a mouse cannot be friends with a bear”.

Gino Sassani is a member of the Southeastern Film Critic's Association (SEFCA). He is a film and television critic based in Tampa, Florida. He's also the Senior Editor here at Upcomingdiscs. Gino started reviewing films in the early 1990's as a segment of his local television show Focus. He's an award-winning recording artist for Omega Records. Gino is currently working on his 8th album Merchants & Mercenaries. Gino took over Upcomingdiscs Dec 1, 2008. He works out of a home theater he calls The Reel World. Favorite films: The Godfather, The Godfather Part II, The Body Snatcher (Val Lewton film with Karloff and Lugosi, not the pod people film), Unforgiven, Gladiator, The Lion King, Jaws, Son Of Frankenstein, The Good, The Bad And The Ugly, and Monsters, Inc.
Visitors Enemy (Blu-ray)