How the West Was Won: The Complete Second Season 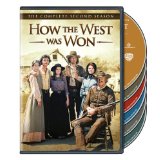 “The West — once a land of awesome but tranquil beauty — had become a battleground for a hundred diverse reasons.”

The “second” season of How the West Was Won — and I’ll explain in a bit why the word “second” deserves to be in quotation marks — does a strong job dramatizing the myriad dangers of the Old West. This batch of episodes showcases vengeful gunfighters, greedy gold prospectors, a taxing cattle drive, and the tenuous relationship between frontiersmen and Native Americans. Of course, at the center of it all is one particularly intrepid clan.

“…and in the midst of these conflicting forces stood the settlers, among them a family named ‘Macahan’ and a man called ‘Zeb.’”

How the West Was Won gets its title from the 1962 John Wayne/Jimmy Stewart/Gregory Peck film of the same name. The movie was loosely adapted into a 1977 miniseries and a 1978-79 regular series of the same name. (And both were preceded by a 1976 two-hour TV movie called The Macahans, which ended up functioning as a pilot for both shows.)

Last year, Warner Bros. released the 1977 miniseries as How the West Was Won: The Complete First Season. That set only had three episodes — each of which clocked in at around 90 minutes — and included The Macahans TV movie as a special feature. On the other hand, this just-released chunk of the show is presented in 14 parts and features a new leading lady. In other words, this “second” season DVD set is actually the first small-screen iteration of How the West Was Won that most closely resembles a traditional television season.

That being said, the material in this batch of episodes is instantly recognizable to anyone who watched the preceding miniseries or The Macahans TV movie. Parts 1 and 2 each clock in at around 2 hours and 20 minutes and feature familiar themes like the U.S. Army threatening to go to war with a Native American tribe or the Macahans displaying an alarming knack for finding trouble.

“We started out for Oregon eight years ago, and we’re still nowhere near it.”

The family is led by imposing frontiersman Zeb Macahan (James Arness), a legendary figure among the Army and the country’s Native American population. Zeb has also taken it upon himself to care for his late brother’s family, which includes oldest son Luke (Bruce Boxleitner), prissy Laura (Kathryn Holcomb), naïve teen Josh (William Kirby Cullen), and feisty Jessie (Vicki Schreck). Early on, we learn the family’s matriarch Kate — played in the TV movie and miniseries by On the Waterfront‘s Eva Marie Saint — died in a tragic (off-screen) barn fire. So the show’s new leading lady is Molly Culhane (Fionnula Flanagan), Kate’s Irish sister from Chicago who arrives to help take care of the Macahan children.

And it turns out this snakebitten clan needs all the care they can get. As I mentioned before, the show’s first two parts clock in at almost five hours by themselves. They also represent the best of what the season has to offer. Parts 1 and 2 feature a semi-contained arc that has Zeb trying to prevent a war between the U.S. Army and the Sioux nation after a Russian hunting party — led by Grand Duke Dmitri (guest star Christopher Lee) — infringes on Native American land and shatters a fragile treaty. The Sioux are led by Satangkai (Ricardo Montalban, who won an Emmy for his guest spot). Meanwhile, Luke’s past — which includes getting labeled a deserter after being forced into service during the U.S. Civil War and shooting a villainous lawman in self-defense — continues to haunt him, even as he meets kindly Sheriff Orville Gant (guest star Lloyd Bridges) and his comely, aggressive daughter Hillary (Elyssa Davalos). Also, eldest daughter Laura falls hard for a handsome Mormon who seeks shelter with the Macahans.

Even after Parts 1 and 2 wrap-up and the show settles into episodes that clock in at a more conventional 47 minutes, the show favors serialized storytelling over an “adventure of the week” format. This longform approach is fitting for a show that aims to capture the sprawling, boundless spirit of the Old West. It also falls in line with the current trend in television that  favors serialized drama requiring a multi-week investment from viewers. How the West Was Won is the epitome of old-fashioned entertainment — a TV Western that arrived almost 20 years after the genre’s heyday on the small screen — but the show’s presentation is instantly recognizable to anyone who grew up (binge)watching television in the 21st century.

The ongoing storylines in this second season, however, are not quite as strong as what we see in Parts 1 and 2. (Or what we saw in the miniseries or TV movie.) The show particularly seems to struggle when it comes to giving the younger Macahan children something interesting to do. Josh’s struggle with boyhood vs. manhood is amusing, but it doesn’t really get any substantial screen time until Parts 10-11 when the character’s innocence is used against him. Laura has virtually nothing to do after her misguided dalliance with the Mormon, while younger daughter Jessie mostly bounces from one perilous situation (potentially deadly bee sting) to another (lost in the desert after a stagecoach accident).

Not surprisingly, the lead trio of Arness, Flanagan and Boxleitner get the more substantial material. A good part of the season sees Zeb collaborating with a group of Native Americans for a highly-dangerous cattle drive to help alleviate a beef shortage. Unfortunately, the cattle drive storyline is occasionally as tedious and drawn out as I imagine a real-life cattle drive to be. Luckily, these parts of the show also highlight the best thing about How the West Was Won: the impressively large-scale storytelling that brought cinema-quality adventure to the small screen. On top of that, the plots involving Luke facing his unlucky criminal past once and for all, and Molly getting involved with a flirty scoundrel named Deek Peasley (Harris Yulin) were compelling enough to mostly overlook the show’s slower parts. The season concludes with another 2 hour 20 minute installment that is tense and dramatic. (Unfortunately, there’s a significant false note in the sloppy conclusion of the Molly/Deek confrontation.)

Although he’s not in the show very much compared to what you’d expect from a traditional leading man, Arness carries How the West Was Won on his broad shoulders. Even when Zeb isn’t on screen, the former Gunsmoke actor’s presence reverberates throughout the story; whenever someone talks abut Zeb with admiration and awe in their voice, you understand why. Boxleitner is actually the more traditional “romantic” lead on this show, but the actor also deftly handles Luke’s relentless misfortune. In other words, Luke is a good guy, but he’s no saint. Flanagan — like Saint before her — earned an Emmy nomination for her performance as the show’s female lead. She brings an exotic grit to Molly that largely helps the character avoid any of the expected fish-out-of-water trappings.

Besides Christopher Lee, Ricardo Montalban, and Lloyd Bridges, guest stars for the second season of How the West Was Won included Eric Braeden, Michael Conrad, Mel Ferrer, Vera Miles, Slim Pickens and William Shatner (who tragically did not share the screen with Montalban). There are no special features on this DVD set, and all 14 parts are presented on six discs. While the leisurely pace worked for certain parts of the show, this second season felt flabbier and less thrilling than its predecessor.

What remains unchanged is that How the West Was Won promotes a spirit of American equality and co-existence that seems downright alien to the Grand Duke in the early episodes. And it’s not just about the uneasy co-existence between the settlers and the Native Americans (who are once again presented multi-dimensionally here, including portrayals of Sioux, Navajo and Arapaho tribes). It’s about how the people of this era reconciled their seemingly violent, rough-and-tumble nature with a limitless future. The show originally aired more than a century after the events depicted in the series, but as far as the American spirit is concerned, the show seemed to be saying “our story continues…”