Under the Skin (Blu-ray) 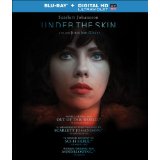 There is nothing wrong with your monitor. Jonathan Glazer controls all that you see and hear. That tiny speck of light you see is just the beginning. The beginning of an experience you will not soon forget. The light appears distant…cold… foreboding. It’s coming closer to us, or we are coming closer to it. The distant star grows while you are assaulted with some of the most bizarre sounds you have ever heard. It’s somewhat uncomfortable. You squirm in your seat. The light grows; its alien forms finally settles into an unexpected familiar form. Still, it’s all rather unsettling. Jonathan Glazer controls more than all you see and hear. For the next two hours he controls your sanity… your very humanity.

Your introduction to Under The Skin explains little. There are some general ideas you’ll begin to assemble. You’ll figure out rather quickly that Scarlett Johansson is an alien. The characters you’ll encounter have no names. Many of them will not speak. After the first sensory experience, the film fools you into believing you’re back on solid ground. Scarlett Johansson drives about the streets of Scotland talking to strange men. She asks directions and inquires about any family or friends they might have. It doesn’t take us long to understand that she’s hunting, attempting to separate a single prey from the pack. Before she snares her first victim, we know exactly what she’s doing, even if we never understand completely why.

The victims she seduces to her home. There she leads them through a large open black room with a shiny black floor that eventually swallows her prey…to what? We don’t really know. Is she feeding off of them? Is she prepping them for some unspeakable horror? Veterans of the horror and science fiction film might have begun to develop our own ideas, and that’s exactly what Glazer’s counting on. This hunt continues until Johansson encounters one particular “victim” He’s a sad and deformed man. And she is beginning to see her prey in a different light. Next she’s the silent observer of a tragic sea drama. Something is happening to our alien character. She learns pity. Sadness. Even despair.

From this point on the film contains almost no dialog. Johansson encounters a hermit in the woods who attempts to offer her comfort and food. No words are passed between them. Johansen is discovering humanity, and it is changing something deep inside of her core being. The hunter is soon the hunted, and the experience is nothing short of terrifying, yet another emotion we suspect she’s never felt.

Most of us know Scarlet Johansson from her place as the Black Widow in the Marvel Universe films. Certainly she’s had a few winners before then, but the Black Widow has become a dominant character for her. It’s a bit ironic, because the alien she plays in Under The Skin is more of a spider than her super-heroine role. The symbolism isn’t lost on Glazer as he provides images such as a fly trapped on a window pane to point us in that direction. The way she slowly and deliberately lures her prey into this web of blackness will remind you of images of spiders and their prey. There’s nothing accidental about that.

In fact, I find there’s nothing accidental about anything in this film. Glazer is using his control over the sights and sounds of this film to lure us somewhere as well. Of course, it’s not to our deaths. It very well could be to a point where we’re forced to think of humanity in terms we’re not at all used to. At the same time he’s using these same images and sounds to keep us just slightly on edge. It’s clear that Glazer does not wish his audience to be comfortable. There is an uneasiness here that is very much part of the experience we’ve paid the price of admission to have. There’s also a decidedly Hitchcock flair to some of the score. If any of it reminds you of Psycho…well, just remember there’s nothing accidental here.

I have to say I’ve gained an incredible respect for the acting talents of Johansson. Not so much in the first half of the film. While she does a great job and with a pretty solid British accent, it’s the last 40 minutes of the film where she shines. At some point she ceases verbal communication. Her encounter with the hermit took me back to my first viewing of Bride of Frankenstein. Remember the encounter Karloff’s monster had with the old hermit? With the simple gestures of food, wine, smoke and the music of his violin, this hermit did what no one else, not even his creator, could do for the monster. He brought out his humanity. The same thing happens here. Johansson absolutely shines as she makes discovery after discovery. She sells every moment of the experience with expression, body language and soulful eyes. It’s the best single performance I’ve seen in years. You will feel every emotion and discovery. Like Frankenstein’s creation, she begins to elicit pity for a being that we just saw seduce and kill people with a stoic, unfeeling manner. That’s some accomplishment.

Under The Skin is getting a limited release. While that means few people might get the chance to see it, it also offers the most effective venue to really experience the movie. This one can’t quite be appreciated in a multiplex. I was fortunate to attend a screening with only a handful of people, fellow critics who understood the necessity to remain quiet. Still, the intrusion from the loud film playing next door intruded upon the experience more than once. In one more bit of irony, I later discovered it was Johansson herself intruding upon her film with Captain America: The Winter Soldier.

Under The Skin is presented in its original aspect ratio of 1.85:1. The 1080p image is arrived at with an AVC MPEG-4 codec. The bit rate is hard to pin down. I’m not sure I’ve seen a release where it fluctuated so much, from well below 20 mbps to over 40. Still, the end result is an impressive one. This high-definition image presentation delivers a ton of sharpness and detail. Black levels are absolutely essential here, and they deliver. From the slick and shiny black surface used to trap victims to a dark road with little lighting, there is texture to be found here in abundance. Said road is so sharp that you can see the individual stones in the road surface mixture. Texture comes across in scenes like an ocean segment where the water recedes, tumbling the sand in its wake. The water delivers perfect deep color without the typical digital shimmer. Look for the many representations of an eye, a running theme in the film even in a burst of camera flare. There is one spot where she stumbles on a busy street where the picture suddenly turns quite poor for a second or two. Not sure what was going on there. The locations offer some fantastic vistas of the kinds of places you don’t often see on a film.

The DTS-HD Master Audio 5.1 is a visceral experience all its own. The “score” is often unsettling and abrasive. Otherwise it’s quite a quiet film with very little dialog. There’s a nightclub scene that offers an energetic burst of sound that is actually very abrupt and intrusive. It doesn’t feel like it belongs and takes me out of this immersive environment for a short time.

Featurettes: (42:20) This is a collection of short features on: Camera, Casting, Editing, Locations, Music, Poster Design, Production Design, Script, Sound, and F/X. You can use the play all option to see it all as one piece. These basically feature production personnel offering information on the film with production still. There are no clips or behind-the-scenes footage to be found here.

Glazer has done his homework here. You’ll find shades of Stanley Kubrick as well as James Whale. Most of all, he controls every aspect of the experience. It’s an art film full of style, to be sure. But there is more substance here than any single viewing will uncover. The film is based on a novel, and I’m curious about the book. It has to be a very different animal than the film I just saw. Under The Skin, the movie, is an entirely visceral experience. I can’t image any descriptions being this effective. Words can’t do it justice. You need to see it for yourself. You’ll need to be patient. It’s a slow burner to end all slow burners. You won’t look at the most mundane human activity the same way again. Only one thing left to say: ” – “.

Gino Sassani is a member of the Southeastern Film Critic's Association (SEFCA). He is a film and television critic based in Tampa, Florida. He's also the Senior Editor here at Upcomingdiscs. Gino started reviewing films in the early 1990's as a segment of his local television show Focus. He's an award-winning recording artist for Omega Records. Gino is currently working on his 8th album Merchants & Mercenaries. Gino took over Upcomingdiscs Dec 1, 2008. He works out of a home theater he calls The Reel World. Favorite films: The Godfather, The Godfather Part II, The Body Snatcher (Val Lewton film with Karloff and Lugosi, not the pod people film), Unforgiven, Gladiator, The Lion King, Jaws, Son Of Frankenstein, The Good, The Bad And The Ugly, and Monsters, Inc.
Stage Fright (Blu-ray) How the West Was Won: The Complete Second Season