Posted in: Disc Reviews by Brent Lorentson on July 21st, 2014 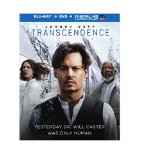 “Maybe it was all inevitable. An unavoidable collision between mankind and technology.”

Just about any project that Christopher Nolan has any attachment to is going to get my attention.  And from the first glimpses of the film in the early teasers, Transcendence always felt like a film Nolan would seem right at home making.  Instead, taking the helm for the first time as director is Wally Pfister.  Though this may be his first time in the director’s chair, Pfister is no stranger to working on pictures of large scale; after all, he’s been Nolan’s director of photography since Memento back in 2000.  So how does Pfister do with his first at bat?  Well, it could be a lot worse…

The film opens up in the not-too-distant future where technology has become a thing of the past.  Man is now forced to go on with their lives without the use of computers, and the relics of technology are nothing more than doorstops.  But what could have happened to make this world technology-free?  Well, to answer that the film jumps back five years, and that is where the story begins.

Dr. Will Caster (Johnny Depp) is a technology genius who has brought the world advances that remind me of a more cool and confident Steve Jobs or Bill Gates.  Caster and his team seem to be on the brink on a scientific creation that will take artificial intelligence to a higher state.   But there is an anti-technology group that plans to prevent Caster’s latest achievement from coming to completion by staging attacks on numerous labs and even attacking Caster as well.

Caster’s wife, Evelyn (Rebecca Hall) is now faced with the looming death of her husband, but she has found a way to preserve her husband’s life as well as continuing his research by joining his mind to the program that Will has created.  This portion of the film was really the only part that worked for me.  Anyone who has lost a dear one can relate to Evelyn and support her decision to try to hold on to her husband with every shred of hope at her fingertips.  But as the film plays on and as Caster’s thoughts and memories run through the program, as the program becomes smarter; how much really is her husband, and how much is simply the constantly evolving machine?

As the film jumps ahead two years, I feel it left me behind.  The human story about the wife’s attachment to her husband and not wanting to let go is ruined the moment we are no longer with them together and she is on the run from the anti-technology group.  Where last year we saw how a relationship between man and machine can develop in the film Her; we see Evelyn try the same thing with her late husband, only Transcendence never hits the emotional notes as well as Her.  The film instead indulges on glimpses into the near future with the use of nanotechnology and the possibilities it can bring. Visually these bits are fun to see, but there is nothing that sticks with me after the credits have passed.

The side story of Caster’s friend Max (Paul Bettany) being taken by the leader of the anti-technology group, Bree (Kate Mara) simply just doesn’t deliver as well as it may have on paper.  Where clearly Max simply cares for Evelyn and is conflicted with his loyalty to his friend, instead of dealing with the emotions of this triangle the filmmakers simply waste time showing Max as a captive who really doesn’t seemed too concerned with his position.  As for Morgan Freeman and Cillian Murphy, well, they at least put forth the effort with making their scenes shine as their characters are trying to piece together what is happening between Caster and the anti-technology group, but at times it’s as though they don’t even know what their characters are really doing here.

Where things get murky for me is where exactly the anti-technology group and Caster swap places as being protagonists and antagonists.  What side are we supposed to be on?  The anti-technology group basically is a terrorist organization that has killed dozens of people, yet the program that is Caster seems to want to only help people and heal them and make them better.  Sure, later in the film things are set in motion to make it clear who is “bad” and who is “good”, but the logic where this is all coming from  just doesn’t hold up for me, nor did it seem to hold up for the audience we viewed this with.  Even more frustrating are the final few scenes where the film seems to shift directions and get a little too on-the-nose preachy for my taste.  Sure, every filmmaker has a right to make a film about their stance on certain issues, but not every audience member is going to be so willing to have the message shoved down their throat.

Transcendence is presented in its original aspect ratio of 2.40:1. The 1080p image is arrived at with an AVC MPEG-4 codec at an average 20 mbps. There are moments when this high-definition image presentation is nothing short of spectacular. The bright and crisp colors of sunflowers and a flowing river are breathtaking. Unfortunately, like the film itself it’s only a reminder of what the film could/should have been. Too often the image is quite bleak and lackluster. Most of that can be attributed to style, but there is a lack of texture of any kind that would have added to the flow of nanites, and it’s missing here. Black levels are only average with very little contrast or shadow definition. Images are often lost in the backgrounds that are also often blurry and distractingly bad at times. The image appears lifeless, and perhaps that’s appropriate for the film’s theme. It’s quite unimpressive, however.

The DTS-HD Master Audio 5.1 is certainly clear. There’s quite an effort to deliver concise separation in the sound field. That means the film often delivers fine little subtle sounds that might have made the experience immersive if it were not so flat and muddy. The sound falls heavily into the mids and takes away any chance for anything dynamic from even the score. Dialog is served fine, but it’s not an enjoyable soundtrack at all. Again, there’s a lifelessness that hangs there wanting to be so much more than it was.

Unfortunately, all of these features are under five minutes with the exception of one that beats the mark by 20 seconds. Most are literally around a minute long. They are all merely extended trailers with more clips than anything else. All come with text teases and repeated material. It’s a bit of a shame when you have to click and sort through such a collection of promo pieces. Honestly, they aren’t worth mentioning singularly here as none are anything more than an extended trailer.

I had high hopes for this film.  I hoped we’d have a film that would create discussion and achieve the fanfare of Inception, but instead I find myself wanting to control-alt-delete the experience and simply wipe the film from my memory bank.

Brent Lorentson is a horror writer and film critic based out of Tampa, Florida. With a BA in Digital Film, he co-wrote and co-directed Scavenger Hunt. His short stories have appeared in various horror anthologies. In 2019 his short script Fertile Blood will be a part of the anthology horror film Slumber Party. He is currently working on his first novel A Dark and Secret Place set to be released in late 2019. Favorite Films: Taxi Driver, Fight Club, I Saw the Devil, The Wild Bunch, Dawn of the Dead, A Clockwork Orange, Pulp Fiction, Heathers, The Monster Squad, and High Fidelity.
Donnie Brasco (Theatrical Cut) (Blu-ray) Exclusive Interview With Lukas Kendall – Co-Writer Of Lucky Bastard