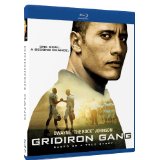 “There are over 120,000 juveniles incarcerated in detection centers across the United States. Upon release 75% will either return to prison or die in the street. What follows is based on the true story of Camp Kilpatrick and the people there who tried to make a difference.”

The Rock — sorry, Dwayne Johnson, sure has come a long way from his melodramatic days as a WWE superstar. His first major film role, as the Scorpion King in 2001’s The Mummy Returns was more about his physical presence than any acting ability. Two years later, he proved he could handle action comedy with The Rundown. Now, with Gridiron Giants, Johnson has added the drama notch to his genre belt.

The film, based on a true story and following a 1993 TV documentary of the same name, tells the story of a group of juvenile criminals who learn how to turn their lives around through participation in a football team, coached by their detention center supervisor (Johnson).

These kids lead rough lives, with gang violence, drugs and theft an accepted part of their reality. Some of the guys in the detention centre, Camp Kilpatrick, are killers. For any of them, it’s just a matter of time before they’re a few years older and imprisoned for life, or shot dead and buried six feet under.

That’s the reality their eventual coach is trying to change. Echoing his own life, Johnson plays a former college football star, and he’s inspired to use football to help these kids become winners, not on the football field, but in life.

The strengths of Gridiron Gang are its story and its cast. Although the film fictionalizes the true story of the Camp Kilpatrick Mustangs football team, there’s enough truth here to provide a feeling of reality. Adding to that are cast highlights Johnson as Sean Porter, and Jade Yorker (Snow Day) as Willie Weathers, a convicted killer and the team’s star running back. Yorker displays a range of emotion here that adds a great depth to his character’s life struggle, which serves as a window to viewers’ empathy for Willie Weathers. These two are backed by a strong cast including Xzibit (Pimp My Ride) and Deadwood’s Leon Rippy.

Helping things along is a strong script by Jeff Maguire (In The Line of Fire), who managed to write believable dialog for a group of gang-bangers and their frustrated caseworkers. As we learn from this DVD’s special features, Maguire took advantage of being on location at Camp Kilpatrick to sit down with the real kids to check his script.

There’s also plenty of great football action here, with some excellent player rivalries adding personality to the bone-crunching sequences. Also, the progression of these players from awkward rookies to an experienced team is handled well, which works nicely with the positive progression in their lives.

However, Gridiron Gang is not without its weak points. First we have the score by Trevor Rabin (Glory Road), which is just too sappy for the context. The film’s first 20 minutes are really gritty, and introduce the harsh reality these kids face. Halfway through the film, Rabin’s score has done everything it can to forget the reality and play up the inspiration. The best happy endings are all about delayed gratification, and this score jumps the gun.

Another weakness is a general departure from that first 20 minutes. After our introduction to the dangerous lives of these boys, the film pulls too many of its punches and plays up the positive transformations of its characters. This is the result of leaning toward the established formula for this type of movie, but that’s no excuse.

Gridiron Gang is presented in its original aspect ratio of 2.40:1. The 1080p image is arrived at with an AVC MPEG-4 codec at an average 20 mbps. The high-definition image presentation is somewhat of a mixed bag. The low bit rate offers some compression issues. You’ll find some digital noise on this release. It makes up for this by delivering some nice color. The football field gives you the best color and detail in the image. You’ll see blades of grass and plenty of dirt divots. Black levels are fair and fortunately not pressed in this film.

The Dolby Digital 5.1 track is somewhat flat. Dialog comes through, and there are a few bright surround moments during the football action. The music score is where the release tries its best to be dynamic but never really delivers a full sound. Subs might as well be on vacation. This sounds very much like a good DVD audio presentation but not up to par for Blu-ray.

Gridiron Gang is an entertaining and somewhat inspiring film, but it’s hard to separate the real story from the formula. This Mill Creek release has a great price, so there is value to be found. If you have the earlier release, “I wouldn’t trade them.”

Parts of this review were written by archived authors

Gino Sassani is a member of the Southeastern Film Critic's Association (SEFCA). He is a film and television critic based in Tampa, Florida. He's also the Senior Editor here at Upcomingdiscs. Gino started reviewing films in the early 1990's as a segment of his local television show Focus. He's an award-winning recording artist for Omega Records. Gino is currently working on his 8th album Merchants & Mercenaries. Gino took over Upcomingdiscs Dec 1, 2008. He works out of a home theater he calls The Reel World. Favorite films: The Godfather, The Godfather Part II, The Body Snatcher (Val Lewton film with Karloff and Lugosi, not the pod people film), Unforgiven, Gladiator, The Lion King, Jaws, Son Of Frankenstein, The Good, The Bad And The Ugly, and Monsters, Inc.
The Junior Spy Agency Open Grave (Blu-ray)