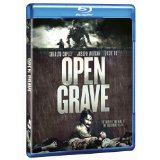 It happens all the time. It’s just as common on large-budget films as it is on the small films. Someone comes up with a great hook. It’s a clever idea with all of the potential to be very good. It might even start off that way. Too many times the road traveled is a road to nowhere, and potential was lost somewhere along the path. That’s exactly the issue with Open Grave. The opening sequence is one of those scenes that really sticks with you. A guy wakes up in a huge pit filled with dead and rotting human beings. He has no memory of who he is or how he got into this mess. It’s a terrifying thought. It’s a visceral nightmare that can touch those hidden fears in even the most stoic among us. What a promising start. Soon our character is given a rope and helped out of the pit. It’s all downhill from here. It’s bad… really bad… when your film peaks at two minutes in.

We eventually find out the guy who woke up in the mass grave is Jonah, and he’s played quite well by Sharlto Copley. With not much dialog to work from (he is among dead people, after all) he manages to do a perfect job of portraying the emotions we would expect from this terrifying situation. When he’s rescued from the pit, he’s led to a house where there are several characters suffering from the same limited amnesia. They maintain knowledge and skills from their lives. ID cards even provide them with their names. The rest is the proverbial blank slate. There are some clues, however. A date circled on a calendar portends some ominous event. There is also an Asian girl, played by Josie Ho, who knows what’s going on. Unfortunately, she can’t speak and doesn’t understand English.

What follows is a tale that has by now long since lost its way. Clues are haphazard, and the final answers are more than a little disappointing. I won’t reveal any of those plot twists here, but you won’t find them satisfying. The film devolves into something more like the typical zombie apocalypse scenario than anything original. The rest of the cast isn’t trying as hard as Copley, and those who are…it shows.

Give some extra credit to the production design guys. None of this failure rides on them. When Jonah wakes in the pit, it is a frightening place indeed. Whatever budget was spent on this film was put into the production design. Even once Jonah exists the pit, the isolated location is creepy and just full of wonderful atmosphere. Someone forgot to tell the crew what a mess they were working on. These guys put together a design that almost makes the film worth watching. They were let down by a promising script gone bad and a director who didn’t really know how to use their precious resources.

Open Grave is presented in its original aspect ratio of 2.35:1. The 1080p image is arrived at with an AVC MPEG-4 codec at an average 30 mbps. Visually, this high-definition image presentation is rock-solid. This is a creepy and moody piece that delivers plenty on atmosphere. There’s a ton of gritty texture. Detail allows us to really get into the disturbing imagery. Black levels are good with a hint of grain that fits the motif perfectly.

The DTS-HD Master Audio 5.1 is pretty soft. This is mainly here to serve the dialog and little more. The atmosphere generated by the images would have really been even better with something more immersive than this. It’s certainly clear but doesn’t surround you at all. It’s clean but remarkably undynamic.

Behind The Scenes: (3:41) Too short to be anything but an extended trailer.

When I was a kid, my parents would get called in to the typical parent/teacher conferences. The verdict was almost always the same. They would be told that I just wasn’t living up to my potential. Someone needs to call the parents of these writers in for a talk. Watch it or not. One thing I can promise you. “We’re not going to remember.”

Gino Sassani is a member of the Southeastern Film Critic's Association (SEFCA). He is a film and television critic based in Tampa, Florida. He's also the Senior Editor here at Upcomingdiscs. Gino started reviewing films in the early 1990's as a segment of his local television show Focus. He's an award-winning recording artist for Omega Records. Gino is currently working on his 8th album Merchants & Mercenaries. Gino took over Upcomingdiscs Dec 1, 2008. He works out of a home theater he calls The Reel World. Favorite films: The Godfather, The Godfather Part II, The Body Snatcher (Val Lewton film with Karloff and Lugosi, not the pod people film), Unforgiven, Gladiator, The Lion King, Jaws, Son Of Frankenstein, The Good, The Bad And The Ugly, and Monsters, Inc.
Gridiron Gang (Blu-ray) Cesar Chavez (Blu-ray)