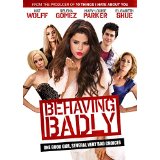 “Everyone in this story is guilty of something.”

With the exception of bland do-gooder/ dream girl Nina Pennington (Selena Gomez), all of the characters in Behaving Badly seem desperate to live up to — or rather down to — the movie’s title. The plot revolves around strippers, nuns, dead Latin teachers, and Lithuanian mobsters, so it’s clear the filmmakers were going for mindless raunch. But instead of a gleefully debauched 97 minutes, we get “comedy” that lacks wit and laughs that feel totally uninspired.

The lack of inspiration is somewhat baffling considering the movie is actually based on 2000’s “While I’m Dead…Feed the Dog,” the comedic, autobiographical novel by music producer/songwriter Ric Browde. Then again, Browde has been taking scathing shots at the long-delayed adaptation — filming for Behaving Badly took place in 2012 — on his blog, which makes the movie’s badness a lot less baffling.

Natt Wolff (The Fault in Our Stars) plays Browde stand-in Rick Stevens, an allegedly awkward high schooler who pines for popular girl Nina Pennington (Gomez). I say “allegedly awkward” because within the first 20 minutes, Rick has received a sexual favor from a stripper, hooked up with his best friend’s mom (Elisabeth Shue), and successfully scored a (morbid) first date with Nina. (Imagine how much damage Rick could’ve done if he was one of the cool kids.) The date with Nina is part of a $1,000 bet Rick made with the son of a Lithuanian mobster stipulating that Rick could bed her in two weeks.

If you think that sounds ridiculous, wait until you hear about the absurd characters who round out this story. Behaving Badly actually opens with Rick’s alcoholic mother (Mary-Louise Parker) attempting to kill herself. Rick also informs us through voiceover narration that his useless, estranged dad (Cary Elwes) is a fugitive, his best friend Billy (Lachlan Buchanan) is in jail, and that there’s a dead body in the trunk of his mother’s car. The action then flashes back two weeks to show us how Rick and his family wound up in this situation. It’s a tediously twisted tale that also involves a sleazy strip club manager (Dylan McDermott), a shady priest (Jason Lee), a horny lawyer (Heather Graham), a lackadaisical guardian angel (Parker, again!), a skeevy principal (Patrick Warburton), and worst of all…Justin Bieber! (The pop star makes a blink-and-you’ll-miss-him cameo, presumably to support then-girlfriend Gomez.)

Reading over the last pair of paragraphs, two things jump out: 1.) This movie actually has a pretty strong cast, and 2.) this thing is a total mess. The director is Tim Garrick, who only had a short film to his credit before making his feature debut with Behaving Badly. So I’m assuming the impressive cast was mostly drawn to the project because of Browde’s book…unless Garrick is the world’s greatest salesman.

The disparate stories don’t gel with each other, which is understandable since even a more experienced director would have trouble corralling all these insane plotlines into a cohesive whole. The result is an unholy mish-mash that channels The Graduate, Risky Business and any movie involving a misguided teenage wager. The bigger problem, however, is the movie’s amateurish, sitcom-my presentation, which belies and diminishes the talent we’re seeing on screen.

Wolff makes for a decent straight man/smartass, but is not a strong enough screen presence to hold the center amidst all the chaos in the film. Gomez filmed Spring Breakers and this movie back-to-back in an effort to break away from her squeaky clean Disney image, except here she comes off as the one sober person in a bar full of lunatics. She’s not having a good time, and neither are we. Among the (overqualified) supporting cast, Shue and McDermott commendably throw themselves into their randy roles, even if what they’re asked to do is more humiliating than humorous. I almost forgot to mention that Gary Busey pops by to play a cop; the movie’s best (unintentional) joke might be that Gary Busey — of all people! — comes off as the sanest supporting cast member.

The movie tries to hit some semi-dramatic notes toward the end, but by then it’s much too late. (Not to mention totally disingenuous; I would’ve respected the movie slightly more if it’d gone all-in on being trash.) The few highlights for me came from throwaway moments — like the arbitrary Arbor Day deadline for Rick’s bet — rather than the many aggressive attempts to elicit laughs. In the end, Behaving Badly is the cinematic equivalent of anybody who confuses being loud and crass with being funny.

“31 Nights of Terror” A Letter to Momo (Blu-ray) Plastic