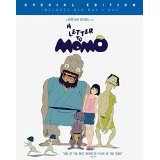 As the spookiest holiday of the year draws closer, we’re all probably a little more sensitive to anything that goes bump in the night. Almost every creature associated with Halloween is meant to terrify us, but what if some of those horrific-looking monsters were actually tasked with watching over us? In the Japanese animated drama A Letter to Momo, a young girl encounters a trio of mischievous spirits that only she can see and hear. The monster shenanigans, however, were merely one aspect in what turned out to be one of the more affecting family films I’ve seen this year.

Momo (voice of Karen Miyama) is a grief-stricken girl who recently lost her father. Her mother Ikuko (Yuka) decides to uproot Momo from their Tokyo home and move to the island of Shio, the sleepy seaside community where Ikuko grew up. In addition to the grief Momo feels over losing her father, she is also overwhelmed by guilt; Momo had been cruel to her father prior to his unexpected death. As a result, Momo clings tightly the last memento her father left behind: an unfinished letter that started with the words, “Dear Momo.”

Upon arriving in Shio, Momo shows little interest in fitting in with the other kids — including a boy her age named Yota (Kota Fuji) — or exploring any part of her new home. That is until she starts noticing some strange happenings the family attic. At the very start of the film, we’d seen Momo get touched by three spirits from “Above” in the form of three water drops. Those spirits manifest themselves as goblin guardians from her family’s book of legends. Momo is initially terrified of the three creatures — Iwa (Toshiyuki Nishida), Kawa (Koichi Yamadera), and Mame (Cho) — and spends most of her time trying to keep them from causing too much trouble. Eventually, she comes to appreciate their company — one of them literally pushes Momo to try something new — especially after she realizes they might be able to help her solve the mystery of her father’s incomplete letter.

When I call A Letter to Momo a “family film,” I’m not just referring to the fact that the hand-drawn animated movie is safe for children. (More on the soothingly old-fashioned look of the film in the Video section.) There is no objectionable material — except for a gratuitous fart gag that will probably be a hit with little kids — but the themes of loss and loneliness might be too serious to hold the attention of little ones. Then again, that’s precisely why this movie stands apart from cutesier cartoon offerings; A Letter to Momo deals with the main character’s sadness and loneliness in a way you wouldn’t see in most American films. (Animated or otherwise.)

A Letter to Momo — which was first released in 2011 and is now making its Blu-ray debut — comes from the creators of Ghost in the Shell and writer/director Hiroyuki Okiura, who hadn’t made a movie in more than a decade. The film’s more bizarre touches (namely, the three grotesque imps who complicate Momo’s life) serve as unpredictable, lighthearted counterpoints to the story’s thoughtful presentation of Momo’s isolation. A Letter to Momo clocks in at 121 minutes, which is long for an animated flick, but Okiura largely uses the time wisely. In addition to portraying Momo’s sadness (what if the imps’ sudden appearance is borne out of Momo frustration?), I liked that the film took time to acknowledge the effect Momo’s father’s death had on Momo’s mom.

Of course, this is still an animated offering from Japan, so a certain level of WTF-ness is expected. The best thing Okiura did was give each of the three imps distinct personalities: Iwa is the bumbling, well-meaning ringleader; Kawa is the whiny troublemaker who can’t stop eating; Mame is soft-spoken, forgetful, and a total scene-stealer. But in their efforts to keep Momo in the dark about their intentions, the trio’s backstory becomes a little confusing. Some of their scenes also tend to either feel redundant or drag on, especially the sequence when the trio and Momo are chased by wild boars.

A Letter to Momo conjures up a health crisis in the final act that leads to a spectacular, supernatural set piece. But all the inventive imagery on display would likely evaporate from our minds if it wasn’t supported by such a thoughtful, touching story.

A Letter to Momo is presented in an aspect ratio of 1.85:1. The 1080p image is arrived at with an AVC MPEG-4 codec at an average of 29 mbps. This is the first “new” hand-drawn animated film I’d seen in years, and I was pleasantly surprised by how vibrantly and cleanly it popped off the screen. The action primarily takes place in a seaside community, which means greens and blues are prominently displayed. The Blu-ray also wonderfully captures line details along with some subtle shifts in color grading that make the image duller in the present day with Momo, and brighter whenever she remembers happier times.

I’m a purist, so I decided to watch the film with the DTS-HD Master Audio 5.1 Japanese track. (For the record, there is also a better-than-average English dub available with accompanying subtitles.) Dialogue is placed front and center, but I want to talk about the rest of the surround sound field. The track provides an exciting, immersive experience that shines during the moments that are big (the climatic thunderstorm; the wild boar chase) and small (the ambient noises that brought the island of Shio to life.) The presentation is thoroughly dynamic without feeling overpowering. A fantastic job overall.

The Making of A Letter to Momo: (38:18) Filmmaker Hiroyuki Okiura is the star of this comprehensive look at the seven-year process of getting his passion project made. In addition to Okiura’s insights into the family-centric story, we see everything from the real-life locales/items that pop up in the film to the painstakingly detailed storyboards Okiura created. There are also interviews and recording session footage with the film’s two leads. In other words, this featurette gives you a pretty interesting peek at all the work that goes into creating an animated feature. Presented in Japanese with English subtitles.

Foreign Trailers and TV Spots: (5:48) In addition to the theatrical trailer, two TV spots, and a Blu-ray/DVD commercial, there is a head-scratching Momo-themed Hiroshima Tourism ad, as well as a totally shameless Coffee Drink ad. Features a Play All option.

Despite its child protagonist and rambunctious monsters, A Letter to Momo — like many other Japanese animated offerings — isn’t exactly aimed at little kids.

So who *is* the target audience for this movie? I’d say anyone who appreciates striking visuals, a solid storyline about kids and their parents, and monsters who have a trick or two (or some stolen food) up their sleeve.