Posted in: Disc Reviews by Brent Lorentson on April 9th, 2015 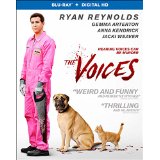 This is a movie that snuck up on me.  I had seen the trailers, and it looked like goofy fun, but I really wasn’t prepared for how this film would linger in my mind and follow me around.  First let me just say this film is not for everyone; this is one of the darkest comedies I’ve seen in quite some time, but on top of that this is one of the most tragic films as well.  At first glance the trailer for The Voices has you thinking this is going to be American Psycho meets Dr. Dolittle (only one character can hear the animals talking), and for the most part that is this film.  But as the final act kicked in, I realized this was really so much more.

The film starts off with a very surreal feeling as we meet Jerry (Ryan Reynolds), who works in the shipping area of a local business.  He’s charming and just seems like a swell guy who finds himself in love with Fiona (Gemma Arterton), who is the office hottie from England.  When he finally gets the courage to ask her out on a date, well, it unfortunately doesn’t go as planned.

Before getting into the blood, the gore and the twisted hilarious mayhem that follows, it is important to remember that Jerry at his core is a good guy.  Jerry knows he has problems and is seeing a therapist to work on his condition, but unfortunately he finds an issue with taking his medication, and it results in his altered perception of reality.  The side effect of this is that the animals around him also talk to him.  Playing his conscience is Bosco, his pet dog, and as the devil on his shoulder there is Mr. Whiskers, both voiced by Reynolds.  These conversations are more than just there for comedic value; instead they offer insight to his insecurities as well as being his voice of reason (for good and bad).

What separates Jerry from your average serial killer is that Jerry does have the best intentions, only things just never seem to go as planned, and he unfortunately finds himself boxed into a situation where murder seems to be the only way out.  Jerry, after all, lives in his own world where just because someone is dead doesn’t mean they will stop existing, as we see him converse with the heads that slowly start to fill up the space in his refrigerator.  This reality Jerry lives in is not the true reality of the film, though; in brief moments we do see Jerry faced with the reality of the world and what he surrounds himself with and the sight is sad, in fact quite tragic.  It’s these glimpses into reality that allow the viewer to sympathize with Jerry while at the same time revealing how insane the man really is.

It’s Lisa (Anna Kendrick) who toes the line of both worlds and could possibly be the savior for this character.  We see from the start how much she cares for him, and as her relationship with Jerry develops, we hope that possibly she can bring Jerry back into reality.  But when she enters Jerry’s home and is able to peer behind the curtain into Jerry’s reality, the horror is simply too much.

This is one of those unique films that will be hard for the average filmgoer to embrace simply because the film is numerous genres wrapped into one.  It’s a film that can go from being charming one second to jumping into morbidly grotesque dismemberments the next.  For those willing to give the film a chance and hold on to the very end, I can only hope your response will be like mine.  I have so many conflicting emotions about numerous sequences in the film. There are moments where I found myself laughing out loud or simply cringing wishing Jerry could control himself.  Considering the film got me to care so much for this anti-hero speaks volumes, and it is in large part due to the performance Reynolds delivered.  I’m sure the film will garner a lot of hatred as well, but that’s how it goes when films take a risk. You won’t please everyone, and cinema would be boring if it never challenged us every now and again.

The Voices is presented in an aspect ratio of 2.35:1.  The 1080p image is arrived at with an AVC MPEG-4 codec that dips as low as 14 mbps to highs at 36 mbps.  The film has numerous different looks and appearances, all of which depend on whether we are in Jerry’s reality or not.  When we are in his more fantastical reality or when he is feeling happiest, everything is bright to the point of being over-lit to lend to the surreal quality of the film.  Pink seems to be the color that pops the most as we see it forms of in Jerry’s uniform to nail polish on his love interest.  When things get darker, we see his apartment is drabber and absent of color; even blood goes from being bright red to being a muddy brown.  There is a fine amount of detail at all times, and there are no artifacts or compression issues.

The DTS Master Audio 5.1 does a good job at playing with the dialog of its characters whether they are real or not.  There is nice separation when we see Jerry at home and speaking with his pets which gives us the feeling of space in the apartment.  When the soundtrack kicks in, its silly, funky music helps immerse us into the film.  Some of the gore gags seemed a bit off when it comes to the blood effects, never quite being splat-effect enough. It just never sounded as violent as it should have been.

The Voices from Fridge to Frame (16:54) This is a nice little segment that consists of interviews and some behind-the-scenes material.  We get some bits about how the screenplay was inspired as well as what interested members of the cast and crew to get involved with the project.

VFX The Making of Bosco & Mr. Whiskers (6:34)  Perhaps my favorite segment where we see all the work that went into bringing these talking animals to life.  Everything from how the animals were picked to the time spent on making the conversations appear as lifelike as possible.

VFX Comparison Show Reel (2:55)  We get a look at the footage that was originally shot then layered with all the visual effects.

The voices of Ryan Reynolds (4:31)  We get to see behind-the-scenes footage of Reynolds doing his voice work for all the animal characters.

Deleted Scene (12:10)  There is nothing greatly missed here, but my favorite scene is seeing Mr. Whiskers kill a bird; it simply makes his devilish character come more alive.

Animatics (19:59)  Here we have some storyboards and dialog laid over before the film went into production.  It’s fun to see how close some of the sequences are to the final versions in the film.

While this isn’t a perfect film, it’s a lot of fun and has a lot of heart and its own unique way of expressing it.  Sometimes you need a break from the typical Hollywood fanfare and need to watch something that dares to be different and has fun doing it.  It’s funny, it’s sweet, and it’s loaded with violence.  If you like your comedy black, well, it doesn’t get much darker than this.

Brent Lorentson is a horror writer and film critic based out of Tampa, Florida. With a BA in Digital Film, he co-wrote and co-directed Scavenger Hunt. His short stories have appeared in various horror anthologies. In 2019 his short script Fertile Blood will be a part of the anthology horror film Slumber Party. He is currently working on his first novel A Dark and Secret Place set to be released in late 2019. Favorite Films: Taxi Driver, Fight Club, I Saw the Devil, The Wild Bunch, Dawn of the Dead, A Clockwork Orange, Pulp Fiction, Heathers, The Monster Squad, and High Fidelity.
Walker Texas Ranger: Flashback Wild (Blu-ray)