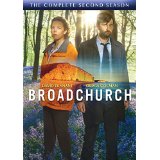 The citizens of Broadchurch — the fictional seaside town that was rocked by the murder of a young boy in this superlative British crime drama — learned the above lesson the hard way. In fact, I felt pretty strongly that every compelling secret the series had to offer had surfaced during the show’s outstanding first season. So I was pretty dubious when I heard creator/head writer Chris Chibnall had gotten the band back together for an encore. Having now finished season 2, I’m thoroughly delighted to be proven wrong.

If you haven’t seen the first season of Broadchurch, go watch it now…I’ll wait! consider this your ***SPOILER ALERT*** The person who killed Danny Latimer was revealed to be Joe Miller (Matthew Gravelle), the husband of local Detective Sergeant Ellie Miller (Olivia Colman), who was leading the investigation alongside abrasive, disgraced outsider  Detective Inspector Alec Hardy (David Tennant). Season 2 opens on the day that Joe is set to enter his plea, which is considered a formality since Joe confessed to Danny’s murder and the evidence against him is overwhelming. But with seemingly the entire town watching — including Danny’s grieving parents Mark and Beth (Andrew Buchan, Jodie Whittaker) — Joe shocks them all by pleading not guilty.

“A criminal trial is a detailed, unpredictable process. There are no guarantees. We have a difficult task ahead.”

Joe even managed to surprise his own junior barrister (Phoebe Waller-Bridge), who steps aside after imploring her boss Sharon Bishop (Marianne Jean-Baptiste) to take the lead on the defense. That move prompts Sharon’s former boss/mentor Jocelyn Knight (Charlotte Rampling) to come out of retirement to prosecute Joe. The ensuing trial riles up the locals all over again — opportunistic reporter Olly (Jonathan Bailey) is live-tweeting it, of course — and drudges up both old and new secrets. Mark, for example, had been having a tryst with local hotel owner Becca (Simone McAullay) at the time of his son’s murder; however, Becca is now involved with kindly Reverend Paul Coates (Arthur Darvill), who has also been secretly providing spiritual counsel for Joe in prison.

Taken as a whole, the first two seasons of Broadchurch could’ve merely played out as a 16-hour Law & Order episode, with season 1 following “the police who investigate crime” and season 2 portraying “the district attorneys who prosecute the offenders.” (Chung, chung!) But Chibnall — a former writer on Doctor Who and its spinoff Torchwood who has littered Broadchurch with fine actors from both shows — is smart enough to realize the murder mystery aspect of season 1 was a big reason the series became a national obsession in the U.K.

As a result, season 2 delves into the botched murder case that drove D.I. Hardy to Broadchurch in the first place. The case originated in a town called Sandbrook and involved the death of a 12 year old named Pippa (Hardy discovered her waterlogged body) and the disappearance of her 19-year-old cousin Lisa. We learn Hardy has been using Broadchurch to stash Claire Ripley (Eve Myles), a key witness in the Sandbrook case: her husband Lee Ashworth (James D’Arcy) was the lead suspect before Hardy took the blame for an embarrassing mistake made by his cop ex-wife (Lucy Cohu). Lee suddenly arrives in Broadchurch proclaiming his innocence and looking for Claire. And just like the season 1 finale revealed Danny’s killer in detail, the Sandbrook mystery is put to bed in the final episode of the season. (And in a similarly clear-eyed, chilling way.)

You can probably glean from that extended synopsis that there’s a lot going on in season 2 of Broadchurch. A big part of the show’s appeal was how it delved into every nook and cranny of a community to explore how it could be ripped apart (or joined together) by tragedy. Given that this season, like the first, only has eight episodes to tell its story, there is less of that specificity here. (Which means fine actors like Darvill, Bailey and Carolyn Pickles as Maggie Radcliffe, the editor of the local paper, have less to do this time around.)

The good news is a lot of their screen time is taken up by dynamite performers like Myles (inscrutable in her victimhood) and D’Arcy (magnetic enough to make you believe that Claire simply can’t resist Lee). The less-good news is that, despite trips to Sandbrook and peeks into the lives of the missing/dead girl’s families, the new murder mystery simply can’t be as engaging as effecting as the Latimer case…largely because it has to share screen time with the Latimer trial. As I said earlier, a good portion of the finale is dedicated to the Sandbrook murder reveal, but those scenes don’t have the same gut-punch effect of Joe Miller’s confession.

Fortunately, the trial is an endlessly fascinating and thrilling source of drama. We know Joe Miller is guilty, so the tension actually comes from whether or not he’ll actually be convicted. Broadchurch obviously has a cynical view of the criminal justice system, but the show delves into how much “justice” actually matters for those who have already suffered unspeakable loss. Rampling (a dignified, damaged lioness) and Jean-Baptiste (a driven, charismatic slimeball of a lawyer) are terrifically-matched adversaries in court. I do wish the show didn’t feel obligated to give every single character a major secret (in Jocelyn’s case, there are two) or force a connection with one of the townsfolks (Sharon’s junior barrister hooks up with a town local and conveniently stumbles onto valuable information.)

Overall, the trial offers an excellent chance to get reacquainted with some of the relationships that have already been established. Whittaker continues to be a powerhouse of grief as pregnant Beth lashes out at everyone around her. (Well, mostly at Ellie.) Meanwhile, Mark wrestles with his own guilt about Danny’s death in a way that disturbingly mirrors Joe’s own plight.

However, the stars of the show are still Tennant and Colman, with the latter delivering an especially dazzling performance. While Tennant amusingly alternates between looking worn down — the actor makes you feel as if Hardy’s ailing heart could explode at any moment — and enraged, Colman gets the juiciest material out of anyone in the entire show and knocks it out of the park. When we catch up with Miller, she is in a self-imposed exile from Broadchurch following the embarrassment of having Danny’s killer living under her own roof. Colman captures the shame, anger, pain, and indignity of that predicament. And thanks to her great rapport with Tennant, the show is also able to mine the gallows humor of how screwed up both their lives are. (Hardy’s attempt at being warm involves awkwardly asking Miller, “Do you want a hug?”)

This set of episodes may not quite reach the highs of season 1, but they are still pretty damn good. (At many intervals, they’re actually quite excellent.) And that’s honestly much more than I expected when I heard the show would be returning for another go-around. (Especially after sampling Gracepoint, the tepid American carbon copy remake.) Given the notion that Broadchurch was originally planned as a trilogy and that Tennant and Colman are already on board for season 3, I’m less skeptical and more excited to find out what happens next.