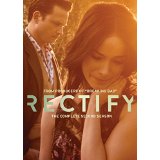 “You look at life like it’s a burden. Life is a gift.”

The best thing about Rectify — SundanceTV’s excellent, thoughtful slow-burn of a Southern drama — is that it gives equal weight to each of those viewpoints. Daniel Holden has spent more time as death row inmate than he has as a free man. As an 18 year old, he was convicted of the rape and murder of a teenage girl and spent the next 19 years in prison awaiting his execution. Daniel was suddenly freed after DNA evidence vacated his sentence, and season 1 showed him struggling mightily to adapt to life on the outside. (It also showed the outside world struggling mightily to adapt to him.)

“One bad choice. One mistake. Sometimes that’s all it takes.”

Season 2 picks up in the aftermath of the brutal beating that put Daniel (Aden Young) in the hospital. As his mother Janet (J. Smith-Cameron) and younger sister Amantha (Abigail Spencer) take turns sitting by his bedside, local sheriff Carl Daggett (J.D. Evermore) faces an uphill battle in finding and prosecuting the culprit(s). (The fictional small town of Paulie, Georgia isn’t exactly crying in its grits over Daniel’s beating.) Right before he was put in the hospital, Daniel had assaulted and humiliated sniveling stepbrother Ted Jr. (Clayne Crawford) after Teddy taunted and insulted Daniel, and told him to away from his wife Tawney (Adelaide Clemens).

The shame from that incident severely affects Teddy’s personal (his marriage to Tawney) and professional (he makes an ill-advised decision involving the family tire store) lives. Of course, the main thrust of the season continues to be Daniel’s (mal)adjustment to the outside world. The specter of his alleged crime hovers over the proceedings. (A lesser show would’ve made the mystery of what happened all those years ago *the entire* proceedings.) Daniel is offered a plea deal, which his attorney Jon (Luke Kirby) urges him to consider. He would avoid a prolonged trial and another extended prison sentence, but he would have to admit his guilt. (Daniel previously confessed to the crime as a teen, but the show makes a strong case that he was coerced.)

What Rectify does so well is take abstract ideas like “guilt”, “freedom”, and “belief” and break them down with extraordinary (and sometimes exquisitely excruciating) detail  to figure out what they actually entail. For example, Daniel is technically free since he’s no longer confined to his oppressively-white, 9 by 7-foot cell. But what good is that “freedom” — besides the views being more scenic — if most of the people he meets (including some in his own family) regard him as a murderer?

Rectify comes from creator Ray McKinnon, an actor-turned-writer whose first TV writing credit is this show. Promotional materials also boast that it’s “from the producers of Breaking Bad.” (Although, given the more elegiac tone and subject matter, Rectify is more like Breaking Sad.) It’s a tough subject matter to dramatize, to be sure. It’s also not exactly the easiest sell in this age of binge-worthy Big Moments and limited series; Rectify is an open-ended show that outwardly deals with thorny themes like religion and righteousness.

The makers of this series wisely double (and even triple) down on character development and explore creative ways of telling their story. Consequently, Rectify isn’t shy about dipping its toe into surrealism (Daniel’s outing with a “goat man” in season 1’s “Drip, Drip”; season 2 has him get into some drug-fueled escapades at a party in Ep. 5/“Act As If”) and symbolism (a fallen tree branch and a kitchen renovation are each recurring motifs). I also enjoyed Ep. 4/“Donald the Normal,” in which Daniel takes a road trip to Atlanta and gets to be someone else for a little while. That episode features a guest turn from Frances Fisher, one of the few times Rectify cast a relatively well-known actor for a one-off role. (In season 1, it was Hal Holbrook as Daniel’s original attorney.)

That’s not exactly a defect because the show’s regular cast is pretty outstanding. I’ll admit that it took me a while to warm up to Young’s deliberate, monotone portrayal of Daniel. It probably helped that season 2’s first couple of episodes feature a heavy dose of  Daniel in his prison days; ironically, the actor seems most alive during the scenes when Daniel is on death row. But spending more time with the character and the performer made me appreciate the full scope of his performance. I’m particularly taken with the way Daniel carries himself as if the whole weight of the world rests on his shoulders. Young projects both danger and serenity. That duality bounces nicely off Clemens’ unabashedly graceful work as Tawney, who also represents one of the most curious and open-hearted portrayals of a religious person I can remember on TV. (Or anywhere else.)

My favorite actor, however, is probably the most hiss-worthy character. (Well, besides Michael O’Neill’s prosecutor-turned-senator Roland Foulkes, who is loath to see the most high-profile conviction of his career overturned. But even Sen. Foulkes believes he has righteousness on his side.) I’m talking about Crawford’s work as Teddy, who can alternately be seen as the bizarro version of Daniel or the market correction that took Daniel’s place once went to prison. (Teddy and his dad, played by Bruce McKinnon, run the tire store that was supposed to be passed to Daniel.) Teddy is cowardly and passive-aggressive where Daniel is bracingly direct. Both feel like they have little control of their lives, even though Teddy hasn’t spent a minute in prison. Crawford makes the character’s fear and insecurity relatable. It’s also hard to ignore Spencer’s fierce work as Daniel’s protective sister. Amantha has spent her entire adult life working to clear Daniel’s name. As a result, she forgot to get a life of her own, which is nicely portrayed as Amantha debates staying in Paulie to be near Daniel or accepting Jon’s offer to leave Georgia behind.

Rectify: The Complete Second Season features all 10 episodes on three discs. The lone special feature is a standard/promotional “Rectify: Season 2” mini doc. Season 2 ends with a pulse-pounding, confessional cliffhanger that cruelly places Daniel in the same position he was in almost two decades earlier. We still don’t know definitively what Daniel did (or didn’t do) all those years ago, but the finale left enough story threads dangling — including a potential new threat to Daniel’s freedom — to make me excited to see what happens once season 3 premieres in July.

Exclusive Interview With David Hewlett – Writer/Director Of Debug And Rodney McKay From Stargate The Wire: The Complete Series (Blu-ray)