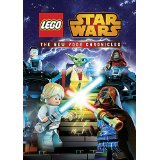 The Star Wars universe is famously vast, and that’s before the Force even Awakens this Christmas and kicks off a new series of feature films. (And let’s not even go down the Expanded Universe rabbit hole.) My point is that it’s been almost 40 years since Star Wars premiered, and the army of artists who have taken on George Lucas’ iconic creations haven’t even come close to running out of material to explore. It was actually 10 years ago that the first Lego Star Wars short premiered and applied the toy company’s irreverent, spoofy brand of humor to deconstructing Lucas’ “Empire” brick by brick.

The latest offering, Lego Star Wars: The New Yoda Chronicles, didn’t quite premiere a long time ago. In fact, the four installments included here — labeled “Episodes IV-VII” — initially aired on the Disney Channel last year and comprise the entire “second season” of the Yoda Chronicles. They also follow the three episodes that aired on Cartoon Network in 2013, which is considered the show’s first season.

I didn’t watch that first season of the Yoda Chronicles, but anyone who has seen the original trilogy — so basically anyone who has been alive these past 40 years — can follow along pretty easily. The action picks up with our heroes (Luke Skywalker, Princess Leia, Han Solo, Chewbacca, C-3PO and R2-D2) exuberantly celebrating their latest victory over the Galactic Empire. (To give you a visual, Chewie is manning a DJ booth on the Millennium Falcon.)

After that same boisterousness gets the crew in trouble, Yoda and the Ghost of Obi-Wan Kenobi decide to expand Luke’s Jedi training. As a result, this set of episodes centers around a race to collect the last of the holocrons, which are crystal-like devices said to contain Jedi knowledge and secrets. Luke needs them to enhance his Jedi training, but Darth Vader wants to harness their power for the sake of the Empire.

My favorite of the bunch is actually the first installment, “Episode IV: Escape from the Jedi Temple.” After setting up the main storyline, a flashback shows us how our Jedi heroes procured the holocrons and stashed the last remnants. The highlight is a mind-wiped C-3PO behaving like an ‘80s action hero for most of the episode. It’s especially funny because Anthony Daniels is the only Star Wars cast member to reprise his role here. Unfortunately, the rest of the voice actors are decidedly off-brand interpretations of iconic characters. Obviously, none of these episodes are meant to be taken seriously at all, so a voice performance that is comically off isn’t the worst thing in the world. I’m referring more to flat characterizations; Han Solo, for example, is basically a generic blowhard.

Fortunately, the folks who make these Lego animated films generally have strong comedic instincts. In addition to an out-of-character C-3PO, these episodes hone in on Luke’s mopiness and Darth Vader’s hidden sensitive side. There’s also a zany, ZAZ tone that I thoroughly appreciated. Besides the throwaway visual gags (too many to list), there are funny nods to everything from Indiana Jones to The Warriors. I also enjoyed the random pair of brazenly unsuperstitious Imperial henchmen, along with the gentle jabs at the original trilogy. (If nothing else, Yoda Chronicles answers why Chewbacca has been wearing that cumbersome utility belt all this time.)

“Episode V: Race for the Holocrons” has Luke and Vader converging on Tatooine — cue the “Cantina Theme” — and one of them gaining the upper hand. “Episode VI: Raid on Coruscant” features a counterattack by the character who was previously bested and a ghostly return from a Jedi with a particular set of skills. The conclusion, “Episode VII: Clash of the Skywalkers,” brings Luke and Vader to Mustafar and to a familiar asteroid field.

Lego Star Wars: The New Yoda Chronicles features all four “season 2” episodes on a single disc. The only special feature is an alternate ending to “Clash of the Skywalkers” that drastically changes the outcome of the holocron chase. Of course, it ultimately doesn’t really matter: both endings conclude with the winning side celebrating with a conga line. Yoda Chronicles isn’t Star Wars canon, nor is it meant to be. I recommend you enjoy it for the amusing, genial diversion it is.