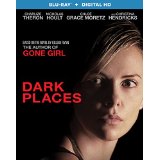 “People have short attention spans. And there’s always another murder.”

Barely a year after Gone Girl became a mid-range blockbuster, we’re already getting our second big-screen adaptation of a Gillian Flynn novel. To be fair, both Gone Girl and Dark Places went into production around the same time in the fall of 2013. But that just means someone anticipated that a single shot of Flynn’s twisted brand of Midwest murder/mystery mayhem wouldn’t be enough to satisfy movie audiences.

“Around 2 a.m. on October the 13th, 1985, a person or persons killed three members of the Day family in their farmhouse in Kinnakee, Kansas. The youngest child, Libby, escaped the killer through a window in her mother’s room. The oldest child, Benjamin, never produced an alibi.”

Dark Places opens with a peek at that fateful night that shattered Libby and Ben’s life. We catch up with Libby (Charlize Theron) as a damaged, bitter adult who never moved on from that trauma. She has no meaningful personal relationships to speak of, and her only job appears to be capitalizing on her long-ago tragedy. (Libby “wrote” a book about the killings, dubbed the “Kansas Prairie Massacre”; she also accepts donations from sympathetic fans.) Just as her funds are about to dry up, Libby receives a curious offer from a young entrepreneur named Lyle Wirth (Nicholas Hoult). Lyle tells Libby he is part of the Kill Club, a group of murder-obsessed amateur investigators who take it upon themselves to solve real-life crimes. The Kill Club believes that Libby made a mistake when she fingered Ben (Corey Stoll) as the killer almost 30 years earlier, and time is running out before they have a chance to set him free.

Meanwhile, the movie repeatedly flashes back to 1985 to show us the time period leading up to the murders. Patty Day (Christina Hendricks) was the stressed family matriarch, a struggling farmer with too many mouths to feed. We also learn that young Ben (Tye Sheridan), with his dyed black hair, had been labeled a devil worshipper, which only fueled the town’s hysteria at the time. The movie gradually reveals more about the dysfunctional Day family — Ben had a bad-influence girlfriend named Diondra (Chloe Grace Moretz), while deadbeat dad Runner Day (Sean Bridgers) was mixed up with drugs — before finally showing us what happened on the night of the murder.

Even though the movie adaptation arrives a little later, “Dark Places” was published back in 2009, about three years before “Gone Girl.” Dark Places is directed by Gilles Paquet-Brenner, who also wrote the screenplay. The French filmmaker is making his American debut here and —with one notable exception — remains very faithful to the book. In fact, given the high number of subplots and potential red herrings (a Native American bookie, and a girl that Ben may or may not have molested also figure into the plot), you could argue Paquet-Brenner might have been a little too faithful.

Nevertheless, the director mostly wrangles all those threads to tell a coherent story. The biggest problem — other than the wan voiceover narration from adult Libby that sounds especially weak compared to the clever way the device is used in Gone Girl — is the constant toggling back and forth between time periods. That device lends itself more easily to books, where you can easily dedicate alternating chapters to the events of 1985 and the present day. While Paquet-Brenner does an admirable job of incorporating flashback sequences in ways that make thematic sense, they still halt the movie’s narrative momentum in both time periods. So just as you’re starting to get into the sleuthing of the present day or the family drama of the past, the movie yanks you to a different spot.

The biggest departure is probably the casting of Theron. The book version of Libby is described as a busty redhead who is barely five feet tall. If you’ve seen Theron, you probably know she doesn’t quite match that description. There are real-world reasons why Theron is starring in this movie — the actress is also a producer on the project and is likely the reason it got financed in the first place — but it seems like Libby’s small stature is meant to represent her stunted  emotional state of mind. Either way, Theron is a convincingly battered, resentful presence, and one of the story’s more effective ironies is that Ben seems infinitely more at peace in prison. In the flashbacks, Hendricks summons the same strength and wounded pride that made people root for her on Mad Men, and Sheridan continues a run of solid work as troubled kids with the odds stacked against them. Meanwhile, Moretz brings her trademark edge and considerable chops as an actor to a role that could’ve easily been one dimensional.

I wish Hoult had more to do, but to me the whole Kill Club subplot is the biggest missed opportunity in the entire story. (Not only could the Kill Club work as the central focus of the movie, it could be blown out into its own TV series.) The movie also abandons a promising angle about what happens to sympathetic “victims” after they grow up, and the public has moved on to someone else. Dark Places gets off to a very promising start, but the film eventually crumbles under the weight of its own plot.

Dark Places is presented in an aspect ratio of 2.40:1. The 1080p image is arrived at with an AVC MPEG-4 codec at an average of 36 mbps. For a movie that toggles between two different time periods so heavily, the image is surprisingly consistent. Both the 1985 and present day sections offer a crisp presentation that features solid detail for the characters’ shabby surroundings. (If anything, the 1985 scenes include a more muted yellow hue that fits the farmland setting.) The most obvious departure is the heavy, intentional noise that pops up for the brief sequences that tease the night of the murder. Black levels are solidly deep and offer crucial separation for the low-lit climaxes in both the past and present day.

The DTS-HD Master Audio 5.1 track generally offers a subdued sense of immersion, which makes the few explosions of sound that much more startling. Those bursts only occur in a couple of places, like the multi-channel assault when Libby first enters the throbbing Kill Club. There’s also an impactful shotgun blast from the night of the Kansas Prairie Massacre that occurs off-screen in the movie, but emanates from the proper rear speaker. Dialogue is clean and balanced well enough with the rest of the sonic elements.

All of the bonus material is presented in HD. Both featurettes include a disclaimer warning viewers not to watch them until after you’ve seen the film, since they get into spoiler-y territor.

Bringing Dark Places to Light: (23:08) A pretty solid “Making of” that covers Theron and Paquet-Brenner falling in love with the book, and the director meeting and quickly bonding with Flynn (who has a cameo in the movie). Also includes a breakdown of each major character with corresponding comments from the actor who plays them.

About the Author — Gillian Flynn and Dark Places: (9:16) Flynn talks about growing up in the Midwest, wanting to set stories there, and being inspired by “In Cold Blood.” She also gives us an interesting peek at her writing process, which includes not knowing the ending to her stories when she starts writing. Definitely a cool featurette.

The movie, in my opinion, telegraphs its biggest revelation a little too overtly, but there is still too much plenty of other material to grab your attention here.

Dark Places doesn’t reach the delirious highs of Flynn’s most famous work, but it still spins a pretty compelling yarn of its own.