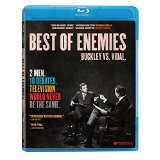 “Argument is sugar, and the rest of us are flies.”

By now, we’ve grown numb to the fact that there are simply too many TV channels to count. So it’s not surprising that many of them have to take increasingly extreme measures to get our attention. Unfortunately, that line of thinking has extended to television news, which began trending toward sensationalism — and away from reasonable discourse — a long time ago. However, the idea that noise and conflict attracted eyeballs wasn’t the status quo during the late 1960s, when viewers had only three channels to choose from. Best of Enemies tells the story of how two towering intellectuals (and one desperate network) helped alter the TV landscape forever.

“During the Republican and Democratic conventions of 1968, ABC News hired the conservative William F. Buckley and the liberal Gore Vidal for 10 nightly debates on national television.”

Best of Enemies is directed by Robert Gordon and Morgan Neville, and the filmmakers excel at transporting us to what was a particularly fascinating period in American history for a variety of reasons. Before zeroing in on the documentary’s “stars” and the country’s splintered political climate (which looks awfully familiar), we get some entertaining context about ABC and its news division. At the time, the network was a distant third place behind CBS and NBC. (It was such a low-budget operation, the movie shows us one of their sets collapsing.) Rather than offering the traditionally cut-and-dry coverage of the Republican and Democratic conventions, ABC decided to try something wildly different to attract viewers.

“For Buckley, Vidal was the devil.”

William F. Buckley was the conservative author and political commentator who in the 1950s had founded National Review, one of the few publications dedicated to conservative commentary at the time. About a decade after that, he’d begun hosting Firing Line, a weekly debate program on PBS. Buckley, who cut a blue-blooded, eloquent and intimidating figure, was also one of the country’s great debaters. When ABC asked him if there was anyone he wouldn’t appear on television with for the network’s proposed nightly debates, Buckley reportedly said he wouldn’t appear on camera with communists…or Gore Vidal.

“There are two things you never turn down: sex and appearing on television.”

Gore Vidal was the public intellectual and iconoclastic author responsible for button-pushing works like 1948’s “The City and the Pillar”, and 1968’s “Myra Breckinridge.” To put it mildly, a lot of his radical, contrarian beliefs — some of which proved to be well ahead of their time — were at odds with everything Buckley stood for. Vidal was also equal parts brilliant, articulate, and pompous. In other words, he was the perfect foil for Buckley. Today, we look at this pairing and instinctively recognize it’s “ratings gold” potential, but Best of Enemies is about a time when that wasn’t necessarily the case.

Gordon and Neville make a number of smart, cheeky choices in presenting this clash of titans. (I enjoyed the use of stately classical music to soundtrack some of Buckley and Vidal’s nastier verbal smackdowns.) The directors also cannily cast Kelsey Grammer and John Lithgow to perform readings of Buckley and Vidal’s respective notes, which purportedly offer some off-camera insights and observations from each man about his opponent. The device is used sparingly and, while Grammer and Lithgow do a nice job, there’s no substitute for the real thing.

Not surprisingly, Best of Enemies is at its best when Buckley and Vidal are seen and heard speaking for themselves. After establishing the fundamental differences between the two combatants, the documentary also devotes some time to showing us some of the things they had in common.

Both had failed political runs in their past — Buckley previously ran for mayor of NYC, while Vidal had made a run at Congress. But the movie isn’t quite as riveting when it delves a little deeper into each of their personal lives (Vidal’s sexuality). And while their political connections are undeniably interesting — Vidal was related to Jackie Kennedy and had a rivalry with Robert Kennedy; Buckley had a long-standing admiration and friendship with Ronald Reagan — there’s not quite enough time here to properly delve into them.

More importantly, both men acknowledged and appreciated the persuasive power of television. As a result, there’s a treasure trove of archival footage showing both Buckley and Vidal at their brilliant, biting peaks. It’s no coincidence that these are easily the best bits in the movie.

The 10 debates (or rounds) lend themselves pretty easily to a boxing metaphor, even if Best of Enemies doesn’t push that idea quite as far as Ron Howard’s excellent Frost/Nixon. Vidal lands the first blow during the Vietnam War-focused first debate — which looks to be shown in its entirety here — as Buckley appears to have under-prepared. The duo proceeded to throw verbal counter-punches at one another (Buckley clinically cuts down Vidal’s characterization of Reagan as an “aging juvenile actor”) while the filmmakers add some context. (Chicago is portrayed as a war zone after the riots at the city’s Democratic convention.) The climax comes during the ninth debate, which devolves into name-calling (the term “crypto-Nazi” is used) and a shocking-at-the-time threat of physical violence.

So, who “won” these debates? It’s temping to declare the guy who made his opponent blow his top on national television the winner. More likely, the person who won is probably the one who’s ideology you happen to agree with. Best of Enemies actually opens with a scene of Vidal offering a tour of his majestic Italian villa…which includes a picture of his most famous rival in a curious spot. We also learn the battle of wits continued beyond their televised debates, spilled over onto print, resulted in some lawsuits, and basically carried on until Buckley died in 2008. (Vidal died in 2012.) As a result, I’d say the only undisputed winners are Gordon and Neville for vibrantly bringing this sliver of pop culture history to life.

Best of Enemies: Buckley vs. Vidal is presented in an aspect ratio of 1.78:1. The 1080p image is arrived at with an AVC MPEG-4 codec at an average of 30 mbps. Naturally, most of Best of Enemies is comprised of archival TV footage from the 1960s, which is faithfully presented in its grainy, artifact-heavy glory. However, the modern HD interview footage is unassailably sharp and blemish-free. There is also a surprising amount of variety here, including colorful, crisp clips of 1970s Myra Breckinridge movie adaptation and 1979’s Caligula. (Vidal was the screenwriter for the latter.) Overall, this disc from Magnolia Home Entertainment offers surprisingly lively visuals that boost the oral discourse.

The DTS-HD Master Audio 5.1 track is as dialogue-heavy as you’d expect from a documentary, especially one about a series of debates. The dialogue sounds appropriately weathered yet is free of popping or any sort of damage that detracts from the experience. It is also, not surprisingly, confined to the front speakers. The rears only occasionally spring to life to echo Jonathan Kirkscey’s intentionally obtrusive score. I was somewhat surprised to hear the subs menacingly rumble to life during sequences that depicted riots/demonstrations on the streets.

Additional Interviews: (1:05:40) These interviews function as the film’s deleted scenes. They include commentary from the film’s “talking heads”, including Andrew Sullivan, Christopher Hitchens, Dick Cavett, George Merlis, James Wolcott, Lee Edwards, Linda Bridges, Matt Tyrnauer, Reid Buckley, and Sam Tanenhaus. It’s a nicely-balanced group that provides additional insight into Buckley, Vidal, and the late 1960s through interviews with chapter titles like “A Book is Flogged” and “Bill at National Review.”

Interview with directors Morgan Neville and Robert Gordon: (7:13) Despite working on the movie for five years, the directors don’t seem all that weary about having to sort through mountains of TV footage to make their documentary. (Buckley and Vidal absolutely loved being on TV.) Gordon admits that he ended up liking Buckley more personally (if not ideologically) after working on the project. Not as daunting as the “Additional Interviews” and definitely worth a look.

“It wasn’t necessarily sensible…it was a shot in the dark…and it changed television forever.”

As the nation ramps up for another presidential election — and political pundits prepare to parse every dumb thing uttered by each of the candidates — Best of Enemies looks surprisingly timely for a movie about something that happened almost 50 years ago.

The documentary is made with wit, flair, and a proper appreciation for an uncommonly compelling and volatile time in American history. Even more importantly, the film captures a tremendous irony: two of the smartest, sharpest guys to ever appear on television also helped dumb the medium down irrevocably.