Posted in: Disc Reviews by Jeremy Butler on November 6th, 2015 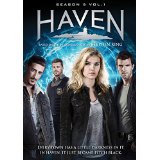 For me Haven has always been a quiet-storm series. It was a show that I had heard nothing about when I first started watching, but when I got started, I found it compelling. It’s a mystery series (or at least it used to be) based off a novella from Stephen King. In the beginning, one question was paramount to the series’ lead character: who is the Colorado King? That question took many seasons to answer, but now that the show’s time is limited due to Syfy announcing its decision to cancel the series, with the final episodes to air later this year, another question has arisen as the paramount question: who is Audrey Parker?

Brief recap: Audrey last season for the good of the town went into the barn in order to stop the Troubles, the generational affliction that grants the residents of Haven equally extraordinary and chaotic abilities. Nathan does everything in his power to stop her but ultimately fails, but despite Audrey’s sacrifice the Troubles do not go away, and a destructive meteor shower threatens to destroy the town. Concluding that they need Audrey in order to stop the chaos, they open a portal between worlds with the help of two new faces, Jenny and William. However, William turns out not to be what he represents himself to be and is soon revealed to be one of the original architects of the Troubles. As he continues to bestow dangerous and uncontrollable new Troubles on the masses , he also reveals that the reason that Audrey also returns to Haven to help the Trouble is a punishment because as her original self, Mara, she is the other architect of the Troubles. Eventually, William is captured and thrown into an abyss, but before being thrown he manages to bring back Mara.

Now on to this season: the emergence of Mara is a new interesting twist. Mara, unlike Lucy, Sara, and Audrey, is not here to help but to create mayhem and force Nathan, Duke, and the others to help her bring back William. The others believe that Mara must be stopped at all costs, while Nathan remains firm with his love for Audrey and is determined to get her back. This season explores different themes such as the existence of parallel worlds taking the series in a whole new direction. On the surface, it is an intriguing idea; however, as the season progressed the exploration of this idea started to take the show away from some of the more established dynamics that made the show great in my opinion. This season I also found myself drifting away from certain characters. In the case of Audrey, my drifting was not due to the character shift rather than the fact that there wasn’t much arc for Mara this season. I found her motivations lacking as an antagonist, though she was talented in manipulating people, particularly Nathan and Duke, into doing things on her behalf whether knowing or unknowing, I just was hoping for a bit more from the woman who infected an entire town.  I won’t waste time on Nathan, as I have never been very fond of his character. Nothing against the actor, but the way he is written, he just always comes off as a hypocrite in my opinion.

The only character that I resonated with this season was Duke. Duke has always been a bit of a fan favorite for me and one of the major draws for why I watched the series, but this season you can’t help but really feel bad for him as he is forced to endure much more than the rest of the cast. He always seems to be left holding the short end of the stick, and this season is no exception; he begins the season with heartache and ends it with guilt.

Despite new additions and plot twists, there still remains enough of the elements that drew me to the show originally. The cast are seasoned veterans in their roles, and they carry themselves in that fashion, and this season Adam Copeland really comes into his own as a member of the cast.

Haven Season 4 is presented in its original aspect ratio of 1.78:1.  The 1080p image is arrived at with an AVC MPEG-4 codec with an average of about 30 mbps. A very good-looking series, well-lit with a clear, crisp picture throughout. Much of series takes place outdoors, and there are plenty of gritty details in the forest and ocean backdrops available to provide an immersive experience that is never overblown. The setting of the series I’m guessing does aid in the lighting aspect given that the climate is generally overcast. The CGI effects of certain elements like “the thinny” do leave something to be desired, but it makes up for it in certain areas such as one scene featuring an exploding man. The detail of the explosion and the gory aftermath are colorfully depicted without being over the top.

The DTS-HD Master Audio 5.1 track is clear and concise for this dialog-centric series. The soundtrack and dialog mix well with one another, though much of the audio is received from the front speakers with the exception of certain action sequences. I did not get much of an immersive feeling; perhaps a bit more ambient noise could have aided in that experience.

Audio Commentaries: The showrunners share intimate details about each episode including behind-the-scenes details regarding a big reveal in the season finale, their opinions on cast portrayals, and favorite scenes.

Inside Haven Featurettes: Main characters Emily Rose, Eric Balfour, and Lucas Bryant, along with a few guest stars, provide a brief recap to each of the thirteen episodes of season 5. Intercut with scenes from the actual episodes, the cast provides behind-the-scenes details and their feelings about select scenes.

Native Breaks Free Featurette (7:07): Clearly a webisode in which it depicts the guard as they aid a troubled individual in his escape from the British who seek to use him as a weapon during the Revolutionary War.

Witches Are Born Featurette (7:27): Another webisode, this time set during the Salem Witch Trials era featuring the guard once again coming to the aid of a woman being pursued by those who would condemn her.

Despite knowing that they will be the last, I am looking forward to the airing of the final episodes. It’s the excitement of knowing how a series ends. However in this case, they better not go out on a cliff-hanger. I’m serious; the production crew has plenty of time to provide a suitable conclusion.

Jeremy Butler is a film school graduate of the International Academy of Design and Technology. He is been writing for Upcomingdiscs since 2012; however, movies have played a big part of his life for much longer. Favorite genres include horror, science fiction/fantasy, and comedy. Favorite movies are V for Vendetta, Boondocks Saints, Kiss Kiss Bang Bang, and The Godfather.
Toy Story that Time Forgot (Blu-ray) Best of Enemies: Buckley vs. Vidal (Blu-ray)