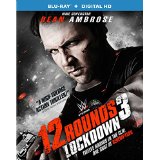 With their impossibly beefy frames, larger-than-life personas, and familiarity with staged combat (sorry, buddy), pro wrestlers fit the old-school action star mold perfectly. Unfortunately for them, Hollywood isn’t nearly as interested in action flicks that don’t have superheroes, dinosaurs, or Liam Neeson. And while interconnected cinematic universes are all the rage at the moment, Lionsgate and World Wrestling Entertainment have a pretty interesting partnership themselves. Their latest offering is the dopey, compulsively watchable 12 Rounds 3: Lockdown, which is considerably more entertaining than it has any right to be.

You may have guessed by now that 12 Rounds 3 (even the title is wonderfully ridiculous) is the third film in the saga. However, it’s also the second film in the “Action Six-Pack” series, a recent pact between Lionsgate and the WWE to make a sextet of action flicks starring the latter company’s wrestlers. (The first film in the “Six Pack” was Vendetta.) Even before this partnership, the WWE had found a measure of straight-to-DVD success by plugging its superstars into action vehicles that are only vaguely related to each other. (See, The Marine series.)

So far, the 12 Rounds films have proven to be similarly malleable. The first one starred John Cena, who has recently found his comedic groove as a supporting player in movies like Trainwreck and Sisters. The second one starred Randy Orton, who subsequently achieved major Internet fame by using his patented finisher on everyone. This latest installment stars Dean Ambrose and represents something of a departure for the franchise. Whereas the first two films centered around a protagonist trying to survive a psychopath’s sadistic games, the “12 rounds” here refer to something else entirely

Ambrose (whose real name is Jonathan Good) plays John Shaw, a cop who returns to active duty after a shooting that left him wounded and a rookie officer dead. The other cops in the precinct blame Shaw for the rookie officer’s death. Their ringleader is Tyler Burke (Roger Cross), Shaw’s former partner and a crooked cop. The film actually opens with Burke killing a drug dealing associate to cover up his illegal activity. What Burke doesn’t know is that the drug dealer’s dead body contained a piece of evidence linking Burke to his crimes. When that piece of evidence falls into Shaw’s hands, Burke quickly decides to eliminate his former partner. As a result, Shaw is trapped in his own precinct with a small army of cops looking to kill him…and he’s pretty low on ammo.

This time, 12 Rounds alludes to the number of bullets in Shaw’s Sig .40 caliber pistol. Fans of the first two movies might be disappointed to see the series radically move away from its central conceit, but convoluted, sadistic “games” seem to have gone out of style along with the Saw franchise. On top of that, the gimmick this time around is instantly engaging, encouraging us to take note of every time Shaw fires a bullet or two. (And in case you hate counting/math, Shaw periodically stops to take inventory of his ammo.)

Ambrose is a believable bruiser, but he’s not a fountain of charisma the way someone like The Rock is. In fact, some of his line readings early on are likely to elicit some winces. Fortunately, once Shaw goes into survival mode, Ambrose mostly gets to react and speak in abbreviated bursts of dialogue that play to his strengths. He also has a laconic, lunkhead aura that is interesting to watch. It helps that the charisma vacuum is ably filled by Cross, who plays Burke with relish without going miles over the top. The imposing actor is also a believable physical match for Ambrose.

There’s evidence to suggest that director Stephen Reynolds knows precisely what sort of junky, ludicrous action flick he’s been tasked with making. (Why doesn’t Shaw ever pickup one of his fallen rivals’ weapons?!) Fortunately, the director seems to have some fun with it. The undisputed highlight is the moment where Shaw creatively uses a taser to get some additional firepower and squeeze out of a tight spot.

Reynolds (who directed a different movie called Vendetta, just to mess with everybody) keeps the 90-minute 12 Rounds 3 moving at a reasonably brisk pace; he seemingly never lets more than 15 minutes go by without some sort of fisticuffs or gunplay once Shaw becomes a hunted man.

12 Rounds 3: Lockdown is presented in an aspect ratio of 1.78:1. The 1080p image is arrived at with an AVC MPEG 4 codec at an average of 26 mbps. Almost all of the action takes place in darkened interiors, since Shaw becomes trapped in his precinct at night. As a result, the palette here is exceedingly subdued. While that’s appropriate for the movie’s storyline, it doesn’t lend itself to very many show-stopping visual moments. Fine detail is largely strong, though not what I’d call razor sharp. Black levels offer solid separation, but could’ve been a bit inkier at times. And while some medium shots occasionally seemed a bit soft, this is overall a reasonably clean but unremarkable HD presentation.

The DTS-HD Master Audio 5.1 track is where you’ll find the spark in this A/V presentation. Sure, the ominous “suspense” score from Nathan Whitehead butts in much too often in the rears. But the overall sonic presentation offers the necessary oomph during the action scenes. The blows land with an impactful thud, and the gunshots explode to life. (There’s even a nice, subtle effect during a scene at a gun range, where the sound originates in the front and echoes to the rest of the surround sound field.) Dialogue and those bruising sound effects are largely confined to the front speakers.

Resourceful Adversary: (4:55) This featurette offers a quick rundown of the plot. Since Shaw’s ammo is pretty limited, we get a glimpse at some of his creative kills and hand-to-hand combat.

Filming a Firefight: (6:10) This mini-doc focuses on the sequence where Shaw is particularly outgunned and has to improvise. (Hence the taser.) We get a look at the practical effects and real weapons used for the sequence, along with a glimpse at Ambrose’s stunt double. (Ambrose laments not being able to use the double for his day job.)

Yes, 12 Rounds 3 plays like a low-rent Die Hard knockoff. But it’s also better than your average movie starring a wrestler (non-Dwayne Johnson division, of course), and it’s certainly much better than you’d expect from the third film in a wrestler-centric franchise.

Ambrose won’t become a crossover star based on this film, but it’s still worth a look for Cross’s villainous work and for its happily doltish action movie charms.