Posted in: Disc Reviews by Gino Sassani on January 9th, 2016 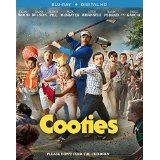 “I’m under some medication for a medical condition so I may not be seeing this correctly. But I’m pretty sure I might be seeing some of your students possibly eating Mr. Peterson. Again it could be the medication.”

Cooties starts out with the grossest sequence in the entire film. You might not want to start this film if you’re eating, particularly if you’re eating chicken nuggets. Ben Franklin once warned us that there were two things one should never see made: laws and sausages. He might just as well have been talking chicken nuggets. The opening sequence delivers the nuggets-making process from the clucking chicken through processing right to the plate of a young third-grade girl at Fort Chicken Elementary School. Unfortunately, these nuggets have their own secret recipe, and it’s not 11 herbs and spices. But it will make for an interesting day at Fort Chicken Elementary.

Clint (Wood) once lived in Fort Chicken but managed to escape to New York where he was pursuing his dream to be a big-time writer. Like most prison escapees, it doesn’t work out very well, and he’s found himself back living with his mother and taking a substitute teaching job at his old school. There his lesson plans involve having his third grade students read parts of his failed novel and offer notes. Fortunately, we’re spared the dramatic readings of his Christine clone, but with a boat when our little nugget-eater decides she’s still hungry and bites the face of a fellow student. Before we know it the school is overrun by zombie rug rats, and the surviving teachers are doing their best to survive. I taught for 12 years, and that’s basically the scenario at any school.

The faculty is staffed by the requisite offbeat personalities that are intended to inject the comedy into this spoof. The most sane member is Lucy (Pil). She’s actually Clint’s childhood sweetheart with whom he hoped to hook up. But she’s going out with Wade (Wilson), the gym teacher who can’t sink a basket to save his life or pronounce dual rear wheels. He’s the typical macho stud with an IQ of 31 who’s still reliving the glory days as a high school running back champion. The three here make up an amusing love triangle that never really develops.

The faculty also includes Tracy (McBrayer); he’s gay but won’t admit it, while everyone else knows. He pulls out pretty much every gay stereotype in the book. Rebekkah (Pedrad) carries a rape button and is turned on by guns. Doug (Whannell) is the sex-ed teacher with more hang-ups than a phone solicitor selling swamp land in Florida. Finally there’s Rick, played by the wonderful Jorge Garcia. He’s terribly underused as the crossing guard high on mushrooms who spends most of the movie observing the carnage from his van in the parking lot. They really should have found a way to work him into the film more. Just about all of his scenes he plays alone, and they are hands down the funniest stuff in the film. It goes to show that it’s not just writing in comedy but the delivery, and Garcia is Papa John’s.

“A line has been crossed. You can’t eat the teachers, man.”

This is certainly a zombie film spoof with a clever twist. The zombies are all 10-year-old kids, and it’s the dysfunctional teaching staff that’s trying to get out alive. I have to say this one worried me. The plot required a lot of small kids getting killed in gory ways and doing a lot of bloody devastation themselves. The filmmakers handled it quite well. It never looks scary taboo, and the kids look like they’re having an absolute blast playing the zombies. These aren’t slow-moving George Romero zombies. These kids are in shape and likely filled with enough teacher angst to carry them through the romp. The gore is never too bad, opting mostly for the funny moments of a kid using intestines as a jump rope or another playing with eyes. It sounds worse than it is. It’s actually all pretty harmless fun.

The film is a very collaborative effort. There’s obviously a ton of improv going on, and many of the actors are also involved in the production crew in some way. Leigh Whannell plays Doug and co-wrote the film with Ian Brennan, who has a short but funny stint as the acting principal. Elijah Wood serves as one of the film’s producers. You can tell throughout that everyone’s having a great time. Wood is intended as the star for the film, but he just can’t keep up with Rainn Wilson as Wade. The guy is off-the-wall nuts here and is always larger than life. The film sinks considerably when he’s not on camera. He’s the kind of guy you want to start out hating but just can’t hold the grudge. There’s an incredibly missed opportunity here, as I think it would have been hilarious if he had had some scenes with Garcia. The combination of this huge but mellow character with Wilson’s Wade is almost worth the chance of a sequel.

The film manages to tap into a story that works for both kids and adults. Every kid likely has dreamed of doing something nasty to their teachers. And while most might not admit it, teachers have the same fantasies about their kids. Of course, no one really wants to do anything bad to anyone, but both get to live out a little fantasy revenge here. Not that I’m saying the film is appropriate for young kids, but you know they’ve seen worse.

Cooties is presented in its original aspect ratio of 2.40:1. The 1080p image is arrived at with an AVC MPEG-4 codec at an average 35 mbps. This high-definition image presentation delivers pretty what you might expect here. The image is always sharp, and there’s a surprising level of texture here that sucks you in. Black levels are a bit strange here. I can’t quite put my finger on what’s going on, but black doesn’t appear to exist in its purest form here at all. It’s a deep grey that extends to the letterbox bars themselves. It’s the same on every player here. I suspect it’s some kind of style choice and is obviously intentional…unless it wasn’t. In that case someone messed up at the color board. It’s OK, I guess, but I’d really love to hear the logic behind it all.

The DTS-HD Master Audio 5.1 is going to be driven by the dialog and some of the grunts and growls of the tyke zombies. There’s an obvious flaw as the film begins. Some dialog appears doubled and comes out of the surround mix as if it’s in a cave. Again, this is a mistake or some very odd style choice. It all leads me to believe there was something amiss in the Blu-ray authoring. The menu was also glitch, so I have to say I’m not a fan of the authoring here at all. Lionsgate usually does a much better job than this. The sub is actually quite dynamic and delivers some of the best audio moments. Surrounds offer the usual scratchy and mangling sounds of the carnage that allows you to come sit in the middle of it all.

There is an Audio Commentary with most of the cast and crew.

Circle Circle Dot Dot…Catching Cooties: (13:20) This is the behind-the-scenes feature with cast and crew talking about the concept and mostly talking about what a romp the film is.

Deleted/Extended/Alternate Scenes: (16:02) In a film with so much improv there are going to be many alternate takes along with cut footage. There are 12 scenes here with a handy play-all option.

Alternate Ending: (4:12) There’s an optional commentary track here. This one finds them in a camp in the woods instead of Danville at the end. Then there is a sequel setup going into the credits.

Talkin’ Cooties: (9:18) This is the recording session for the commentary track. You get select scenes watching them gathered in a circle with the headsets delivering the track.

Horror spoofs are hard to do well. This one has more than its share of misses, but it actually hits more often than I expected. Of course, there’s all of the zombie conventions, but it’s clever enough to be fun. There’s a ton of energy here and the requisite Hobbit joke which has defined the post-Tolkien life of Elijah Wood. It’s short enough at 88 minutes to avoid overstaying its welcome. If you’re a zombie and/or a comedy fan, I’d say check this one out. I’m happy to point you in the right direction here. “I’m here to help. Think of me just like Bat Man.”

Gino Sassani is a member of the Southeastern Film Critic's Association (SEFCA). He is a film and television critic based in Tampa, Florida. He's also the Senior Editor here at Upcomingdiscs. Gino started reviewing films in the early 1990's as a segment of his local television show Focus. He's an award-winning recording artist for Omega Records. Gino is currently working on his 8th album Merchants & Mercenaries. Gino took over Upcomingdiscs Dec 1, 2008. He works out of a home theater he calls The Reel World. Favorite films: The Godfather, The Godfather Part II, The Body Snatcher (Val Lewton film with Karloff and Lugosi, not the pod people film), Unforgiven, Gladiator, The Lion King, Jaws, Son Of Frankenstein, The Good, The Bad And The Ugly, and Monsters, Inc.
Experimenter (Blu-ray) Under the Dome: Season 3