Posted in: Disc Reviews by Gino Sassani on February 13th, 2016 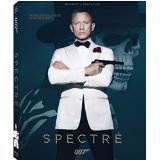 “You have got a tricky day ahead of you.”

It’s safe to say that Daniel Craig peaked as James Bond with Skyfall. Sam Mendes was the man who figured out how to make Craig work in the part. The secret wasn’t in the classic images of Bond’s past, but in the future. Instead of trying to mold Craig into Bond, Mendes molded Bond into Craig. It was the right thing to do as long as Daniel Craig was going to continue in the role. With Mendes repeating as director and John Logan from Gladiator and Penny Dreadful fame handling the script, expectations were through the roof for this one. That is before Craig himself toured the interview circuit complaining about playing James Bond. I believe there was a reference to a hot poker in the eye being preferable to reprising the role again. Now I’ve seen Spectre twice, and I don’t believe Daniel Craig has anything to worry about. I suspect the next film will sport a brand new James Bond. And indeed, I think this film proves it’s time for a change. Let the speculation games begin.

As the film opens we find Bond in Mexico City during the Day of the Dead. What follows is a pretty impressive sequence that ends in a very thrilling helicopter climax. This is quite a promising introduction. Craig has never looked and felt better as James Bond. It’s one of the most impressive opening sequences in a lot of years for the franchise. If they could keep this kind of electricity flying, this was going to be one heck of a film, and I might have to take back every bad thing I ever said about Daniel Craig. Sadly, one of the best Bond moments leads us into one of the worst Bond credit sequences. I’m not at all familiar with Sam Smith, so I won’t speak to his own talent or catalog of music. But this song is terrible. It doesn’t appear to tie into the film even a little bit. To make matters worse, the sequence is clearly a computer-generated piece. I guess it’s time to accept that as part of these iconic Bond traditions, but it’s too jarring for me. It seems to me that if you’re going to continue the tradition, either continue the tradition or drop it. It ends up amounting to nothing more than a bad music video. At least there’s the promise of continuing the thrilling action when the film returns. Maybe not.

Bond (Craig) has received a rather cryptic message from the grave. The former M (Densch) has put him on the trail of a mysterious villain who appears to hold the key to most of Bond’s troubles over the last few years. The timing couldn’t be worse. MI6 has merged with MI5, and the 00 program is on the brink of being abolished. It’s all the work of new security guru C (Scott). It seems he is trying to bring the world’s intelligence network into the 21st century. His project is called 9 Eyes, and he wants to merge all of the surveillance technology of nine nations into one central core. Of course, he expects to be running that central core out of a new flashy glass building for the British CNS. Obviously, the story takes advantage of the NSA headlines and the growing fear we all have of constant surveillance. While Bond is working toward his own ends, it’s up to M (Fiennes) to try to stop this dangerous changing of the guard. He’ll make a pretty good team with Q (Whishaw) and Moneypenny (Harris).

Meanwhile Bond is up to his usual globetrotting to track down the organization Spectre with only a ring he confiscated from his adventure in Mexico. It leads him to the widow of the man he killed and the first of the film’s traditional Bond girls. Lucia (Bellucci) leads him to a meeting of Spectre, where he hopes to learn more. But he’s been expected and must make a daring escape after a distant encounter with the mysterious Mr. Oberhauser (Waltz).

His next lead finds him face to face once again with Mr. White (Christensen), who is not the man he used to be. That stop takes him to White’s daughter, Dr. Madeleine Swann (Seydoux). It is here that the story remains for quite some time. They take a lengthy train voyage that appears to serve no other purpose but to allow for a close-quarters fight with the film’s henchman Hinx, played by Dave Bautista. From there it’s the lair of Oberhauser himself and the requisite villain exposition. Of course, his rouge operation ties in with M’s situation, and it all leads to a rather explosive night in London.

Spectre is actually the most classic James Bond of the Craig era. That may seem like an asset, but it really isn’t. The two worlds don’t really blend well, and what remains is an entertaining film that never quite lives up to the excitement and energy of the first 10 minutes. The film is absolutely overlong at 148 minutes. The pacing drags, often making the middle of the film feel rather listless. There isn’t a lot of chemistry between Craig and Seydoux, and that’s a serious problem. They spend far more time together than most of the Bond/Bond girl relationships, and it’s a heavy weight for the film to carry. The best chemistry of the film can be found in the trio of Q, M, and Moneypenny. They get to have a bit of time for their own caper, and I rather liked the way they worked. James Bond is not so much of a team franchise, but perhaps this is one element that should be expanded upon. The three actors here are perfect in the parts, and I rather liked the change-up.

The globetrotting won’t disappoint. This film takes us from London to Rome, Tangiers, Austria, and Mexico. You can also expect some nail-biting action sequences. There’s a rather nice car chase that ends in a splash. Bond also gives chase in an airplane even after it loses its wings, and there’s the helicopter sequence in the beginning of the film. We don’t get to spend enough time there, but Waltz has a villain’s lair that rivals Dr. No’s.

Christopher Waltz is the kind of villain we might have expected to encounter in the Connery days. It’s that casual sinister style that made past Bond villains so iconic. Waltz is at ease in the part, and like all good bad guys, it doesn’t occur to him for a second that he’s a bad guy. Dave Bautista offers the expected muscle but wasn’t used as well as he could have been. He has a strong presence, but he never gets to do anything more than attempt to beat the crap out of Bond.

I think the most outstanding flaw here is Daniel Craig himself. As someone else pointed out, it’s hard to tell if my impressions were colored by his forceful rhetoric or genuinely how I experienced the character. Whatever the reason, there was little passion or energy in his performance. Craig looks like an actor who is sick of the part and desperately doesn’t want to be here. Oddly enough, the opening sequence appeared just the opposite. I don’t know when in the filming schedule the Mexico segment was filmed, but I suspect it was early on. Later there are times Craig just looks tired. It’s time he was given that rest.

Where the film shines most is the incredible cinematography. Here the movie lives up to every Bond expectation and tradition. The movie looks beautiful. Hoyte Van Hoytema is the same guy who filmed the original Let The Right One In and Tinker Tailor Soldier Spy. He has an incredible eye, and it works perfectly when given these kinds of locations to film.

Spectre is presented in its original aspect ratio of 2.40:1. The 1080p image is arrived at with an AVC MPEG-4 codec at an average 25-30 mbps. The high-definition image presentation is loaded with sharpness and detail. The Bond films still do most of the f/x work practically, and the detail here really helps to explain why. There’s a kind of texture and visceral feeling you get from stuff that’s really there. It only gets better in a high-definition environment. Colors are a bit muted. I found the image to be too often over-bright. I first noticed it at the theatre screening and found it to be true here. That means while I’m not a fan, this is true to the original intent. Black levels suffer at times because of it. Still, it’s that sharpness that will win you over the most. Close-ups are more natural in color and stand a bit in contrast to everything else. The plant explosion is a vivid visual treat, to be sure.

The DTS-HD Master Audio 7.1 certainly has its moments. Most of these can be found in the Mexico opening sequence. The subs will come wonderfully alive and shake your room as the building comes down. It’s also here were the 7.1 surrounds pull you in. The same can be said for the copter stunt in that same sequence. Dialog never gets buried here, and you’ll experience many dynamic moments both in the action and the score.

Bond’s Biggest Opening Sequence: (20:12) While I’m not sure I’d call it the biggest, this is one of the best opening sequences, at least in recent outings. Cast and crew talk about the Mexico crew and the 1500 extras and over 150 makeup artists. Unfortunately, only a couple of minutes are spent on the copter stunt. I really wanted to see more about that one. Ends with the Mexico film premiere.

Video Blogs: (7:09) There are six with a handy play-all. Too short to be much more than promotional, these production shorts cover a range of topics from the stunts, cars, music and the Bond girls.

Everything points to a new actor in the role next time. This film spends a lot of time tying together pieces from the previous three films, and it ends with very much a wrap-up. It’s the kind of ending you’d find in a series finale. Combine that with the interviews Craig’s given, and as the Sam Smith song reveals, the writing is on the wall. EON has reined Craig in a bit, and he’s had a “coming to Jesus” moment with his bosses. That’s led to a little backtracking and gentler more recent interviews. But it just might be best for all concerned, particularly us, if Bond found a new face. That always puts a wrinkle into when we might see 007 return to action. My guess? “It might be a long wait.”

Gino Sassani is a member of the Southeastern Film Critic's Association (SEFCA). He is a film and television critic based in Tampa, Florida. He's also the Senior Editor here at Upcomingdiscs. Gino started reviewing films in the early 1990's as a segment of his local television show Focus. He's an award-winning recording artist for Omega Records. Gino is currently working on his 8th album Merchants & Mercenaries. Gino took over Upcomingdiscs Dec 1, 2008. He works out of a home theater he calls The Reel World. Favorite films: The Godfather, The Godfather Part II, The Body Snatcher (Val Lewton film with Karloff and Lugosi, not the pod people film), Unforgiven, Gladiator, The Lion King, Jaws, Son Of Frankenstein, The Good, The Bad And The Ugly, and Monsters, Inc.
Zoolander 2 DeadPool