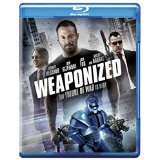 Weaponized can’t seem to make up its mind about what kind of action flick it wants to be. It appears to be the story of a grief-stricken military contractor who obsessively pursues a dangerous experimental program, but instead the film focuses on a brawny, brooding homicide detective. On top of that, the Blu-ray’s cover art prominently features an imposing robot that doesn’t even factor into the plot until about 10 minutes before the credits roll. Most importantly, the movie totally ignores the schlockiness of its botched, cliche-ridden plot and plays everything distressingly straight, which makes Weaponized a pretty joyless trip to the near future.

The film opens on July 4, 2017 with proud papa private military contractor Kyle Norris (Tom Sizemore) on the phone with his son. The connection at the other end of the phone is abruptly cut off after Norris’s son is killed during a terrorist attack on the Pentagon. Norris vows to eliminate the terrorist cell that wiped out his son, and the action jumps forward to 2018. Detective Mitch Walker (Johnny Messner) is called in to investigate when a young war veteran Jack Simon (Timothy Woodward Jr., also the film’s director) shoots up a hotel for no apparent reason, killing multiple people. One moment, Simon has no recollection of doing the shootings, the next he’s robotically confessing to Det. Walker before gruesomely killing himself.

Walker is understandably baffled, especially after he is contacted by Professor Clarence Peterson (Mickey Rourke), an eccentric scientist who insists Simon wasn’t responsible for the killings. Peterson’s contact with Walker makes the detective a target…and puts his family in danger. He eventually uncovers a military program developed by Norris that allows a subject to temporarily swap consciousness with their target.

Unfortunately, all of this sounds much, *much* cooler than it actually turns out to be. The biggest problem is that the muddled script by Sean Ryan never lays down any clearly defined ground rules for how this technology is supposed to work. (Does the target need to be within a certain range? And, seriously…what is the point of the hulking robot?!) So instead of being neat and engaging, the movie’s central conceit is mostly baffling, since we don’t really know how it’s supposed to work. (The film’s original title was Swap, which is somewhere between 5 and 10 times better than Weaponized.)

The movie also unironically employs ever cop movie cliché in the book, even though the story’s best chance of success is sticking with its sci-fi thriller roots. For example, the instant we see Det. Walker’s lovely family — wife Angela (Taylor Cole) and moppet daughter Katie (Kelea Skelton) — we know something bad is going to happen to at least one of them. Det. Walker is also (mis)matched with an older black partner (Cullen G. Chambers) who, I assume, is too old for this s—. Jon Foo also pops by to play Victor, a smart-aleck techie who assists Det. Walker in his investigation and who also gets to show off his martial arts skills because…well, I guess because he’s Asian.

Messner is totally game for his role as a grizzled detective, and he deserves a better action vehicle to show what he can do. I mean, it’s not his fault that Weaponized shouldn’t really be Det. Walker’s story. Of course, that would mean placing more of a storytelling burden on Sizemore, a truly electric actor in the 1990s and early 2000s who seems to be stuck playing bit roles in straight-to-DVD hell. There’s a version of this movie where the audience would feel sympathy toward Norris’ mission and maybe even agree with his extreme tactics, but the over-the-top maniacal glint in Sizemore’s eyes makes that impossible. At least the talented actor with the troubled past has a kindred spirit in Rourke, who is back in straight-to-video hell less than a decade after his career-defining work in The Wrestler. The actor adds some desperately needed quirkiness to the film; his professor carries around a tiny dog and has a bandage on his nose for no apparent reason. (Except maybe Rourke broke his nose in a sparring match a few days before shooting or something.) Too bad he’s not in the movie quite enough to make a difference.

All of this ridiculousness would be more palatable if Woodward’s uninspired direction or Ryan’s sloppy script embraced some of the silliness. (Weaponized does feature a few bits of cool camera work and some neat production design touches that help sell the idea that the film is set in the near future.) Instead, there’s a curious lack of action and thrills in this action/thriller.

Weaponized is presented in an aspect ratio of 2.35:1. The 1080p image is arrived at with an AVC MPEG-4 codec at an average of 32 mbps. It’s not surprising to find this futuristic tale favors a chillier, desaturated palette for the majority of its running time. (One notable exception is a brief trip “overseas” with a group of American soldiers who come under fire.) This is a slick, reasonably sharp presentation that would’ve actually benefited from a little more grit at times. More than a few interior scenes feature unpleasant low lighting that tends to make the image feel flatter and more lifeless than it ought to be. I suspect this solid, faithful-to-the-source HD presentation from Cinedigm isn’t too blame, but the fact remains that Weaponized doesn’t make for as satisfying a visual experience as it could be.

The DTS-HD Master Audio 5.1 track is another story entirely. Right from the start — with the barrage of news reports about the unseen terrorist attack at the Pentagon — the entire surround sound field comes to life in a dynamic way. The generic thriller score by Sid De La Cruz is (thankfully) pushed out of the way pretty frequently in favor of well-placed dialogue, ambient effects, and bullets whizzing from one speaker to the next. The subs are put to very effective use as well, as they rumble to life during a couple of explosions. They also help the consciousness-swapping feel more disorienting. (Actually, the subs come on a bit too strong during swapping sequences.)

Deleted Scenes: (2:34) There are five scenes in all, and their miniscule running time lets you know there’s not a lot to them. (One of them is a riveting sequence of Walker’s partner getting out of his car and walking into a building.) The rest feature poor acting that was best left on the cutting room floor.

There’s a kernel of a decent idea here, but Weaponized gets the least out of it. (The one inspired sequence was a fight between Det. Walker and a person close to him who he doesn’t really want to hurt.)

Unfortunately, I can’t even recommend this one as a “so bad, it’s good” title to throw on and have a good laugh at. The movie takes itself much too seriously for that, and there’s not nearly enough action…and the action we *do* get is neither impactful or inspired enough to make anyone stand up and take notice.