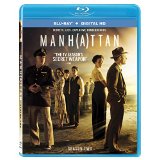 Manhattan is one of those variables. It’s one of those dramatic stories where mankind is altered forever. If it weren’t absolutely true, someone would have had to make it up. Every child in schools around the world knows about the atomic bombs that ended World War II. We’ve all seen the terrible destruction that exceeded even the expectations of the scientists and engineers who designed and built these bombs. We all live in the aftermath of these events. Yet little is known about the people who devoted their lives to making it a reality, not only those directly involved, but their families and the support network necessary to bring them all together. Enter WGN America, and the tale is finally told.  Manhattan enters its second season on Blu-ray.

Manhattan was, of course, the code name of the project that developed the bomb. It was so secret that even Vice-President Truman was left in the dark until the death of FDR placed the decision to use it squarely upon his broad shoulders. The workers and the support staff were housed in a small community where secrecy was the number-one priority. Manhattan explores all of the side effects of that secrecy. People live with paranoia and constant supervision. Their calls are monitored, and their mail is censored. Supplies are scarce. Women can be bribed into working overtime for a pair of nylons. Families have no idea what work their husbands, fathers, and even wives are doing. The series explores their experiences as much as those of workers on the project.

This season begins with Frank Winter’s (Hickey) implosion model as the winning choice. You’d think that would be good news for Frank considering the covert things he did to sabotage the other team and manipulate the trust of his fellow scientists to get what he wants. But things start out badly for Frank, and it just gets worse as the season evolves. He’s missing and reported dead. But he’s really at a Texas prison where his loyalty is being severely tested. The season’s second episode is a wonderful change-up as we spend nearly the entire time in that prison with Frank. Even in the aftermath, Frank’s life isn’t going to be easy. He’s becoming more and more estranged from his wife Lisa (Williams), who is finding him an impediment to her own goals in the camp.

Their lives won’t be made any easier by the arrival of a new commander on the scene. Enter CSI’s William Petersen as Colonel Emmet Darrow. He finds a way to use Frank’s mind and keep him under control. But Frank’s not the controllable type. Now he wants to be on the bomb’s targeting committee and is having serious doubts about using the bomb at all. It leads to one heck of a season finale, hinted at in the first few minutes of the season’s first episode.

Charley (Zukerman) is now in charge, as Oppenheimer (London) finds himself distracted in a rather unique way. Throw in a mischievous wife Abby (Brosnahan), which leads to tragedy. You’d think Charley’s life got easier, but it hasn’t. Pressures at home and on the project drive him almost to the edge.

This is very good stuff here. There’s a real eye for detail and authenticity. While these stories are largely fictional, they play against a significantly historic background. While the Soviets were our allies, you can see the birth of what will become the Cold War with Thomas Schlamme, who pretty much made his mark on The West Wing. He brings that talent for creating wonderful character interrelations, and they abound here. The performances are all quite compelling. Still, the series is most effective when it takes us inside the heads of these complicated characters. That’s where the bird’s eye view of a particular moment in history becomes the most revealing. It also manages to keep us thoroughly engaged without the payoff of the bomb itself. We’re being taken on a slow ride here, but you’ll enjoy every minute of it.

Each episode is presented in its original broadcast aspect ratio of 1.78:1. The 1080p image is arrived at with an AVC MPEG-4 codec. The high-definition image presentation adds to the authenticity of the period piece. The colors are mostly warm with an accent on browns and oranges. The New Mexico scenery is rather drab and colorless, just as it should be. The buildings are also quite plain. It all builds to an atmosphere that puts you pretty solidly in a certain time and place. You get fine detail, and most important you get textures that bring what would be dull images to life. It’s as good as television looks.

The DTS-HD Master Audio 5.1 won’t win any awards for dynamic sounds or aggressive surrounds. If you’ve seen the kind of work Thomas Schlamme has done in the past, you know it is all about the dialog. You get exactly what you need. There are a few rather nice musical cues just for accent.

The show turned a little more soap-opera this season, and I think it lost its focus a few times. The arrival of William Petersen is a huge counter, however. This is not just a rehash Grissom character at all. There’s a lot of nuance here that I hope will continue to be explored. It ends with the anticipated test explosion, and everything will change. It’s obvious they intended to end with the ultimate tease. Of course, they want us back for more. Well… guess what? “It worked.”

Gino Sassani is a member of the Southeastern Film Critic's Association (SEFCA). He is a film and television critic based in Tampa, Florida. He's also the Senior Editor here at Upcomingdiscs. Gino started reviewing films in the early 1990's as a segment of his local television show Focus. He's an award-winning recording artist for Omega Records. Gino is currently working on his 8th album Merchants & Mercenaries. Gino took over Upcomingdiscs Dec 1, 2008. He works out of a home theater he calls The Reel World. Favorite films: The Godfather, The Godfather Part II, The Body Snatcher (Val Lewton film with Karloff and Lugosi, not the pod people film), Unforgiven, Gladiator, The Lion King, Jaws, Son Of Frankenstein, The Good, The Bad And The Ugly, and Monsters, Inc.
The Big Short (Blu-ray) Tuesday Round Up: March 15, 2016