Posted in: Disc Reviews by Gino Sassani on April 4th, 2016 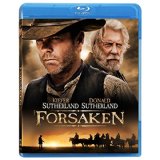 When you see the name Kiefer Sutherland and Jon Cassar together, you might well expect that you’re going to get another helping of the popular television series 24. There Sutherland made a pretty big name for himself in the television landscape as the gritty and “get it done” cop Jack Bauer. In the director’s chair for a good many of those episodes was Jon Cassar, who also shared executive producer duties on the long-running show. But you won’t find the ticking-clock-modern world of Jack Bauer here. Instead you’ll find a thoughtful western that actually avoids a lot of the genre-typical violence and delivers one of the better westerns I’ve seen in many years. There’s also the added attraction of the first time Kiefer shares a screen with his iconic father, Donald Sutherland. Yes, they both appeared in Max Dugan Returns and A Time To Kill, but they did not share the screen together. That father and son chemistry is the focus of Forsaken.

John Henry Clayton (Kiefer Sutherland) returns home to the small town of Fowler, Wyoming a decade after serving in the Civil War. After the war he became a hired gun and has finally reached a point in his life where he wants to put the violence behind him. He returns to his widower father (Donald Sutherland), who is the town’s preacher and has been ashamed of the reputation his son has earned for himself as a killer. Now John hopes to live a life of peace.

That life of peace might just be more difficult than he imagined. The railroads are coming to Fowler, and soon a lot of that farmland is going to be worth a fortune. Enter James McCurdy (Brian Cox), who is buying up the land to make a killing later. Anyone refusing to sell meets up with the persuasion of his hired guns. It’s a two-pointed spear. Gentleman Dave Turner (Michael Wincott) believes in diplomacy before violence. Frank Tillman (Aaron Poole) would rather get right to the killing. Meanwhile John Henry is doing his best to stay out of it to the point of willingly debasing himself into submission to Frank and his boys. But as Gentleman Dave points out: “You can only kick a dog so long before it’s going to bite.” Unfortunately, Frank isn’t so cautious, and the expected showdown is coming.

But it’s a slow burn, to be sure. The film avoids very much violence until we get to that requisite gunfight. At this point it’s no holds barred, and the film finally comes to the end of its patient fuse and allows the expected explosion. This is all just a payoff for what has been really a quite entertaining movie. I would go so far to say that the film’s inevitable climax is my least favorite part of the experience. Up until that point Cassar and his crew had avoided most of the clichés and traps of the genre while still delivering a compelling western drama that is faithful to the needs of a western.

There’s little doubt that the cast is what makes all of that possible. The work between the real-life father and son is quite good. There’s a ton of raw emotion here, and both actors brought out the best in each other.24 fans have never seen their star so vulnerable and emotionally all-in before. There’s just so much about these performances to love. The supporting cast is mostly hit rather than miss. Demi Moore might be the lone exception. She plays John’s once expected mate before he left town. Now she’s remarried, and it makes for an awkward part of both script and pacing. It’s an underdeveloped part and doesn’t do much to maintain an otherwise solid story. One gets the impression that someone felt obligated to include a slight romance angle, but it wasn’t necessary and stands as probably the biggest flaw in the film.

On the other side we have performances from Brian Cox and Michael Wincott that so perfectly fit their characters. These aren’t cookie-cutter cardboard characters, and Wincott is particularly clever as John’s potential rival gunslinger. A lot of thought went into the cast, and Cassar knew enough to get out of their way and provide them with everything they needed to get the job done.

Those needs include solid production design. We’ve seen so many of these western towns that we have this idea in our heads about what they should be. Forsaken meets the expectations but throws in some unexpected beautiful cinematography that completes the atmosphere. There’s an attention to detail here, and you notice subtle moments when the actors are using that atmosphere to bring it all home. Seldom do you see such synergy from a relatively small-budget film. This one is a keeper, to be sure.

Forsaken is presented in its original aspect ratio of 2.40:1. The 1080p image is arrived at with an AVC MPEG-4 codec at an average 25-30 mbps. There’s going to be some disagreement on this high-definition image presentation. The image is incredibly sharp with wonderful texture and sharpness. Close-ups are particularly strong. Colors are bright and vibrant. Grass has an almost hyper-color aspect to it. Here’s where it might get tricky. This image is glossy and noticeably digital in nature. I might have been willing to give up some of this perfection for a little more warmth and a little grain. It’s all just a tad too sanitary and clean at times. Black levels are nicely done with pretty solid shadow definition.

The DTS-HD Master Audio 5.1 absolutely helps with the atmosphere and immersive quality of the film. You get a fine feeling of space with the ambients. Of course, gunfire gives a little zip to the mix. The subs don’t really deliver anything earthshaking here and I would have liked a little more bottom even in the score. Dialog, however, is perfect and makes these fine character moments ring true.

Making Of: (11:32) This is a typical cast-and-crew-led behind-the-scenes feature. Too short to be terribly informative, it gives you a little taste of the film’s production. Of course, there’s a lot of focus on the historical pairing of the Sutherlands.

Forsaken doesn’t reinvent the wheel here. Far from it. Much of the plot owes heavily to Clint Eastwood’s masterpiece Unforgiven. There’s the idea of a bad man trying to change and forces outside of his control bringing him back to the man he doesn’t want to be. The climax doesn’t try to hide the connection as John delivers a line very much like Bill Money’s admonition that anyone who doesn’t want to get shot better slip out the back. Instead of attempting to redefine the genre, this one finds a nice little space just inside the comfort zone and makes it pay with compelling characters and performances. I hope to see more from Cassar in the future. He knows how to make movies. Now, watching movies? “This something I know how to do.”

Gino Sassani is a member of the Southeastern Film Critic's Association (SEFCA). He is a film and television critic based in Tampa, Florida. He's also the Senior Editor here at Upcomingdiscs. Gino started reviewing films in the early 1990's as a segment of his local television show Focus. He's an award-winning recording artist for Omega Records. Gino is currently working on his 8th album Merchants & Mercenaries. Gino took over Upcomingdiscs Dec 1, 2008. He works out of a home theater he calls The Reel World. Favorite films: The Godfather, The Godfather Part II, The Body Snatcher (Val Lewton film with Karloff and Lugosi, not the pod people film), Unforgiven, Gladiator, The Lion King, Jaws, Son Of Frankenstein, The Good, The Bad And The Ugly, and Monsters, Inc.
Exposed (Blu-ray) NYPD Blue: Season 9