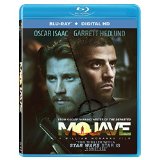 “Look at where the world is because of solitary dudes going mental in the desert.”

Depressed, deplorable artist Tom heads to the Mojave Desert, where he unexpectedly meets his match in crazed, charismatic drifter Jack. The fact that their tense encounter results in a death is one of the least surprising things about Mojave. What initially appears to be a cat-and-mouse game set in the desert turns out to be an interesting, uneven meditation on perception vs. reality that spills over into the vapid world of Hollywood.

“When you get what you want…what do you want?”

That’s the dilemma facing Tom (Garrett Hedlund), a moody artist who has been famous since his teen years and has become severely jaded. One day, he ditches his actress girlfriend (Louise Bourgoin) and heads to the titular desert on a solitary jaunt. The movie offers hints that Tom might commit suicide before a mysterious stranger wanders into his campsite. With his rough, ragged appearance — and the fact that he’s carrying a rifle — Jack (Oscar Isaac) looks like bad news. However, Jack is also a loquacious and philosophical sort who can quote Shakespeare, the Bible, and offer a highly literate rant against the government in the span of a few seconds.

“So which one of us is the sociopath, brother?”

After a brief scrape, Tom and Jack go their separate ways. However, their next meeting results in an accidental death. Tom snaps into action and covers his tracks before heading back home. He arrogantly believes he can go on with his shallow, unfulfilling life, but the deadly events in the desert follow him back to his life in Hollywood. Can Tom avoid the specter of death that seems to be following him, or will the same lucky breaks that made him a Hollywood star/1 percenter continue to shield him?

The film is written and directed by William Monahan, who won an Oscar for his script for The Departed. (Mojave actually features a prominent Departed star in a supporting role as a profane, self-absorbed Hollywood producer who brings a welcome jolt of life.) Monahan’s script here really sparks during the moments when Tom and Jack go toe-to-toe. (One typically sharp dialogue exchange: “Who are you?”/“No one in particular.”/“Anyone in general?”) In fact, you can make a strong case that Tom actually awakens from his existential funk after seemingly meeting his match in Jack.

Monahan also peppers the story with intriguing hints (we glimpse newspaper stories about a rash of deaths in the area) and storytelling choices (the first time we see Jack in the desert, he looks like a mirage) that may or may not be head fakes. The main idea, however, is that Tom and Jack are spiritual (if not physical) doppelgangers; both men are intelligent, have some artistic talent and are similarly disillusioned with the world. So why does only one of them get to be a big shot Hollywood player?

The movie occasionally taps into the oddball detachment that Alfred Hitchcock brought to some of his films (and that the Coen Bros. bring to theirs). The difference is Mojave doesn’t have nearly as strong of a base — in neither its performances or its central themes — to ground the flights of fancy. (It also barely attempts the pitch black humor that helps lighten the load in those superior filmmakers’ other works.) Monahan’s depiction of Hollywood life is deadpan to the point that it appears practically everyone in those scenes is on some sort of sedative. However, the premise that everyone in Hollywood is out of touch — Tom barely flinches at the notion that he might have a new stalker — isn’t exactly original, and Monahan doesn’t really bring anything new to the table.

What we do get is an exceedingly unlikable cast of characters; I reckon it’s no accident (and an ironic joke) that the “crazy, homicidal drifter” is easily the probably the most appealing person in the bunch. Of course, it helps that that Jack is played by Isaac, an actor who exudes limitless charisma in practically everything he does. (Isaac’s scenes with Hedlund recall the intellectual menace he brought to Ex Machina.) Hedlund has the less showy role and seems to be channeling Brad Pitt. (That might not be an accident since he did the same in Troy.) Tom is a very hard guy to like, which is fine because we’re not supposed to think he’s a great guy. Of course, we *are* expected to connect with him on some level as the story’s protagonist. And while Hedlund does good, brooding work, it’s hard to care about what happens to Tom.

“Do you know yet which one of us is the bad guy?”

By the time the movie reaches its inevitable one-on-one climax, it’s pretty clear that the answer is “both!” While it features strong dialogue and takes a few interesting turns along the way, Mojave is ultimately a bit too much like its main character in the desert: it’s too dry, and there’s too much navel gazing.

Mojave is presented in an aspect ratio of 2.40:1. The 1080p image is arrived at with an AVC MPEG-4 codec at an average of 18 mbps. Given the movie’s title, I expected this to be the sort of blazing hot, high-contrast image that typically accompanies desert-set stories. However, a surprisingly small percentage of the action takes place under the harsh sunlight. Tom and Jack’s initial meeting/sparring session, for example, takes place at night, as does the movie’s climax. For those reasons, I was thankful for the deep black levels here, which offered strong separation. Of course, the palette is nevertheless fairly sunny; the daytime desert sequences actually have a pleasing warmth, while the Hollywood scenes give off a surprising chill. (The image for these sections seems slightly more desaturated than you’d expect.) Fine detail is equally impressive for both Tom’s opulent surroundings and Jack’s shabby digs. Overall, this is a strong visual presentation that helps set the film’s meditative mood.

The DTS-HD Master Audio 5.1 track is similarly effective, offering an immersive experience that transports the viewer to this dry, whacked-out version of La La Land. The rear speakers work to bring the desert to life — you can hear a coyote howling in the not-so-distance — while boosting Andrew Hewitt’s terrifically moody score. There are good bits of directionality — including the sound of Tom’s Land Cruiser traveling from one side of the screen to the other — that help make this a dynamic sonic experience.

A Doppelganger and the Desert — Making Mojave: (8:55) Although short, this is a better-than-average “Making Of” in which Monahan reveals he was inspired to make the film based on his own solitary experience in the desert. (He was burned out on the film biz, but couldn’t stop filmmaking from creeping into his brain while he was out there.) Cast and other crew members discuss the movie’s themes, including the lucky breaks that result in some people “making it” while others don’t.

Deleted Scenes: (16:40) There are a dozen scenes here, and a good deal of them expand on the difference between successful artist Tom and various Hollywood wannabes. (One of them unsuccessfully pitches a script called “Mojave.”) Other highlights include a bit more of Walton Goggins chewing the scenery (as Tom’s unfazed agent) and a longer look at Tom’s family.

Mojave achieves a dreamlike quality that works for the movie’s somnambulant vibe. Unfortunately, that also means it might not stick in your memory for very long once it’s over.

I actually suspect this movie might play pretty well on repeat viewings, since it would be easier to keep an eye out for the themes Monahan explores. However, I can only recommend you check it out if you’re interested in a few sharp dialogue exchanges and to see Star Wars‘ Oscar Isaac continue his streak of winning performances.