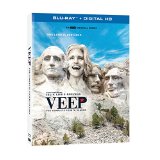 That statement may or may not become a reality in a matter of months, but HBO has real-life politics beat either way. Season 3 of Veep, the caustic, constantly-cussing comedy series, concluded with U.S. Vice President Selina Meyer ascending to the highest office in the land. But lest you think the show jumped the shark by having VP Meyer outgrow the show’s title, there’s more than enough sharp-tongued mayhem to go around once Selina and her staff — referred to as “an infection of mediocrity” in season 4 — have their finger on the button.

“The cycle of abuse continues.”

Season 4 actually begins in a highly unusual place for VP President Meyer (Julia Louis-Dreyfus), who we’ve watched endure indignity after ego-crushing indignity up to this point: she and her staff are actually riding a wave of positivity. The premiere finds a supremely confident Meyer preparing to make her first big speech as president — she moved into the Oval Office after the never-seen POTUS stepped down to care for his ailing wife — to the Joint Chiefs of Staff.

“I’m the president, see? Everything is my fault.”

Naturally, it doesn’t take very long for all the good vibes to fade away. (That speech to the Joint Chiefs of Staff goes awry thanks to some missing eyeglasses and the wrong text being loaded into Meyer’s teleprompter.) Meyer faces a series of scandals during her quest to actually be elected as president. Some are minor (Selina’s daughter Catherine, played by a nicely droll Sarah Sutherland, scores low on Kent’s likability index), others are absurd (a misunderstanding with a Native American painting in the White House draws much more media attention than Meyer’s successful peace talks with Israel), and one threatens her entire administration (unbeknownst to Meyer and her main staff, her campaign used stolen government data to target bereaved parents as potential voters).

On top of that, Veep hasn’t forgotten the importance (or lack thereof) of its namesake. When Selina needs a new running mate, she eventually turns to the immensely charismatic Tom James (Hugh Laurie). At first, Tom seems like a relatively levelheaded addition to the ticket, but he’s revealed to be much like everyone else on this show: ambitious and gifted with a silver tongue when it comes to dropping f-bombs.

One of my criticisms of Veep during the show’s first two seasons was that it often sounded as if a single hyper-literate, profane person was writing in the exact same hyper-literate profane voice for most of the characters on screen. (That would be Veep creator Armando Ianucci, who previously spearheaded the British government-skewering comedy series The Thick of It and directed that show’s equally caustic feature film spin-off In the Loop.) However, that’s no longer the case after spending four seasons’ worth of time with these (un)lovable buffoons. When Selina tells Gary (who would gladly take *two* bullets for her), “You are unimportant…”, it’s one of the few times things go very quiet on Veep. It also helps that the moment (and the data breach scandal) is paid off in the outstanding Ep. 9/”Testimony”, which seeks to inflate Gary’s importance as the Meyer administration looks for a fall guy.

The episode, essentially presented as the most entertaining C-SPAN hearing ever, is the show’s biggest departure so far and a showcase for the entire cast. (Especially Dunn’s defiant Ben.) It also works because once Meyer and her cronies finally settle on a fall guy, we can easily envision all the backbiting and hand-wringing that went into the decision, even if we don’t get to actually see it. (We’ve seen it a dozen times before.) Even when Veep threatens to become too overstuffed — 10 regular cast members who appear in every 30-minute episode, in addition to talented performers like Laurie, Diedrich Bader as the newest member of Meyer’s staff, Patton Oswalt as the new VP’s hands-on chief of staff, and others who flit in and out — the show finds something funny to do with its characters. (For the record, my favorite bit player this year was Lennon Parham’s Karen Collins, Selina’s infuriatingly non-committal lawyer friend/suck-up.) Dan and Amy, for example, are separated from Meyer’s staff, which gives Veep someplace to go besides the Oval Office. Scott gets to turn the smarminess up to 11 when Dan becomes a lobbyist; meanwhile, Amy (Chlumsky really should have an Emmy by now) has an epic meltdown at the end of Ep. 5/”Convention.”

This talented ensemble continues to be led by Louis-Dreyfus, who has won an Emmy each of the four years she has played Meyer. Season 4 probably represents her strongest work overall, as Meyer’s inflated confidence and sense of authority as president sets her up for a harsher (and funnier) fall. However, the real star of the show is the exhaustive (and sometimes exhausting) language. The jokes and insults come at a breakneck pace; I can’t re-print a good many of them because this is a family website, but the sheer volume and variety of the punchlines here are sure to nudge your funny bone. (“The goat’s not gonna scape itself.” “Kent majored in fortune cookies.”)

The finale here is titled “Election Night”, and season 4 concludes on an appropriately uncertain note. However, it also ends with virtually the entire main cast on stage together. It’s a subtle reminder that this nasty group of political animals are totally dependent on each other. The last episode also makes sure to bang home the show’s central conceit: no one really wants to be veep.

Veep: The Complete Fourth Season is presented in its original aspect ratio of 1.78:1. The 1080p image is arrived at with an AVC MPEG-4 codec at an average of 27 mbps. Veep has a loose, cinema verite filming style that’s actually a really good match for a show that incorporates improv. As a result, this is among the least glamorous-looking shows you’ll find on HBO. (Depending on whether or not Curb Your Enthusiasm ever comes back.) That certainly hasn’t made for the most dazzling HD presentation, but the Blu-ray shouldn’t be penalized too harshly for replicating the show’s generally muted-palette. There are some warm tones and sunlight when President Meyer and Tom James go for a bike ride; at the other end of the spectrum, the palette turns chillier and more sterile whenever we visit the office where Dan works as a lobbyist. Pulling off an image that’s both sharp and drab is a tricky feat, but this Blu-ray — like the three before it — serves the material very well.

The DTS-HD Master Audio 5.1 track is once again here to serve the salty, oft-overlapping dialogue. On this front, the track remains exceptional. There is terrific clarity and separation, the latter of which is crucial when there are two or more people yammering. The track does a strong job of making sure each nasty quip is audible. It’s a good thing too, because there’s not much to the track beyond the dialogue. Sub activity is non-existent and the use of the rear speakers continues to be a missed opportunity. A good part of the show takes place at either public functions or frantic work spaces, yet the rears are content to crank out the equivalent of white noise. (We get a bit of reverb when Selina is giving a speech in public, but that’s about it.) Then again, this isn’t supposed to be a sonic extravaganza. As with the show itself, dialogue is king here.

Deleted Scenes: (15:51) Each episode has corresponding deleted scenes, but you’re better off using the Play All option and knocking them all out in one shot. Once again, the material here is very funny —Amy unsuccessfully comparing herself and Sue to Thelma & Louise; a wonderfully excruciating limo ride with Tom James, Kent, and blabbermouths Jonah and Richard — and was most likely cut for time. Available on both discs and presented in HD.

Veep: The Complete Fourth Season features all 10 episodes on two discs. Even though I feel like the show made it’s leap into all-around greatness in season 3, this batch of episodes — which maintained the aforementioned level of excellence — was the first to earn Veep the Emmy for Best Comedy Series. Together with Silicon Valley, this is easily the best hour-long comedy block on television right now.

Season 5 kicked off last night, and — even with Veep creator Armando Ianucci stepping back into a consulting role and handing the showrunner reigns to David Mandel — I can’t wait to see how President(?) Meyer and her staff continue to make a mockery out of the political process. (Four more years! Four more years!)