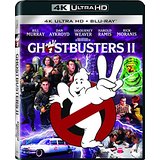 “Who you gonna call?”

It took over five years to put together a sequel to Ghostbusters. Apparently there were dozens of story ideas that came and went before the second film finally began production. It was a promising project. All of the original cast returned along with a few of the supporting cast members. Bill Murray, Dan Aykroid, Ernie Hudson, and Harold Ramis all reprised their roles. Annie Potts, Rick Moranis, Sigourney Weaver, and even David Margulies as the Mayor of New York all returned. The story wasn’t even a terrible idea. All the elements were there, but somehow it seemed to misfire.

Five years after saving New York City from supernatural destruction, the Ghostbusters have fallen on hard times. Venkman (Murray) and Dana (Weaver) have broken up, and he is now the host of a dubious psychic TV show. Stantz (Aykroyd) and Zeddemore (Hudson) have been reduced to performing at children’s parties, what with the anti-spook outfit having been sued into non-existence. Spengler (Ramis) is the only one still pressing on with his paranormal research. But if you’ve seen The Blues Brothers you know that somehow, some way, someone is putting the band back together.

Dana now has a child and starts experiencing weird happenings once again. This time it’s tied to an old Carpathian named Vigo (von Homburg), an evil guy locked in a painting where Dana works now as an art restoration technician. He needs a baby to come back into the world, and with the help of Dana’s off-the-wall boss Dr. Poha (MacNicol), guess whose kid they have in mind? The power comes from a river of slime running under the city that grows off the anger and rudeness of New Yorkers.

Why doesn’t it work? The original worked because there was a certain naïveté to the characters that you can’t reproduce. This story always feels forced and doesn’t have any of the natural charm of the original. Just that little bit of chemistry throws it all off balance and is likely why there was never a follow-up with the original cast.

Ghostbusters 2 is presented in an aspect ratio of 2.40:1. The ultra-high-definition image is arrived at by an HEVC codec. This one doesn’t appear to have the same kind of ultra-high definition bump as the first. Yes, the original grain and image intent remains. But not even the f/x really pop off the screen here. It’s a bit of a murky mess, to be honest. The only real bright spot are some of the shots of the ooze. I’m not talking about the badly animated stream. The good stuff comes with the practical stuff in the many Blob homage scenes.

The Dolby Atmos audio presentation defaults to a 7.1 track. It’s a pretty flat track that doesn’t have any of the dynamic flair of the original. It’s clean and pretty faithful to the source material. That’s about the best I can say for it here.

Let’s be honest. While the original is a classic and deserves the UHD treatment, there’s only one reason this inferior film has joined it. The studio wants to build buzz for the summer remake. “Short, but pointless.”

Gino Sassani is a member of the Southeastern Film Critic's Association (SEFCA). He is a film and television critic based in Tampa, Florida. He's also the Senior Editor here at Upcomingdiscs. Gino started reviewing films in the early 1990's as a segment of his local television show Focus. He's an award-winning recording artist for Omega Records. Gino is currently working on his 8th album Merchants & Mercenaries. Gino took over Upcomingdiscs Dec 1, 2008. He works out of a home theater he calls The Reel World. Favorite films: The Godfather, The Godfather Part II, The Body Snatcher (Val Lewton film with Karloff and Lugosi, not the pod people film), Unforgiven, Gladiator, The Lion King, Jaws, Son Of Frankenstein, The Good, The Bad And The Ugly, and Monsters, Inc.
Contest: Win The Confirmation on Blu-ray from Lionsgate Ghostbusters (UHD Blu-ray) (4K)