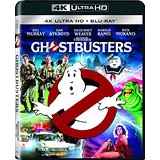 “Who you gonna call?”

By now everyone knows the answer. Dan Aykroyd, Bill Murray, Harold Ramis, and Ernie Hudson are the Ghostbusters. As their ad proclaims, they’re ready to believe you. Ghostbusters was originally conceived by Aykroyd as a vehicle for John Belushi and himself. When Belushi died, reportedly from a drug overdose, the project sat on the shelf a few years. Harold Ramis would eventually team up with Aykroyd and finish the script. It’s been said that “Dying is easy. Comedy is hard.” Leave it to these …two knuckleheads to combine the two and create a phenomenon. Like pretty much anyone else, I’ve seen Ghostbusters many times in the last 20 years. And just like all of you, I’m still not tired of it. I am, however, done with the repetitive theme song.

Ghostbusters pioneered the big-budget comedy. Not since Abbott and Costello Meet Frankenstein have the genres of comedy and horror combined in such masterful form. Ghostbusters had the quality f/x of a blockbuster sci-fi epic. The casting was nothing short of genius. Each cast member brought a distinctive and integral element to the film. Murray provided the used-car-salesman aspect. Aykroyd perfected the common wide-eyed man with just enough knowledge to be dangerously funny. Ramis played the 50’s style scientist with the stoicism made famous in films like This Island Earth. Hudson was brilliant as the Joe-six-pack, obviously intended to represent us, the audience, on this adventure. Sigourney Weaver weaves in just the right amount of sultry and unintended villainy to complete the palette of colors necessary to pull this all off. The supporting cast features actors destined to become stars themselves in the likes of Rick Moranis and William Atherton. While many of the f/x don’t quite meet today’s exploding expectations, they were state-of-the-art in 1984. Forget Kong. Who can resist the giant Stay-Puft Man?

There are a lot of reasons that Sony has put this classic on the 4K UHD early release list. The new film is on the way, and there are some strong opinions already about that movie. I suspect that some of the brass at Sony figured it wouldn’t hurt to remind the hi-tech early adopters why they loved the first movie. It wouldn’t hurt to remind us that the original is absolutely a classic… or would it? Only time and box office dollars will answer that question. Me, I just want to kick back and enjoy the original in wonderful 4K. How ’bout you?

Ghostbusters is presented in an aspect ratio of 2.40:1. The Ultra high-definition image is arrived at by an HEVC codec. With a film of this age you’re not going to see the same kind of startling resolution jump that I’ve seen in more modern efforts. I’m happy to report that Sony did not decide to DNR the image to death. The grain is retained, and that’s a very good thing. The HDR color reproduction brings out everything in this UHD image presentation. The proto-streams are brighter and more vibrant. Slimer is brighter, but here’s the rub. The effects flaws and age are also going to be better defined. It certainly didn’t keep me from enjoying the film once again. Black levels are truly nicely rendered, giving us some surprising contrast here.

The Dolby Atmos audio presentation defaults to a 7.1 track. Of course, there’s not going to be a lot of surrounds. To make this film too aggressive would not be honoring the stereo original material. Thunder and electric charge are mostly the only things that spread out more than the original intent. The song was always so popular that Elmer Bernstein’s score is often overlooked. This audio presentation gives you a chance to perhaps finally appreciate it. Dialog is well placed, and any hiss or distortion from earlier versions is gone.

Ghostbusters’ success can be found in no single element or even incomplete combination of elements. The sum here is really greater than the parts. Take away any of these key elements and what do you have? Ghostbusters 2. Fortunately everyone was smart enough to stop there. Of course, now there is the pending release of the all-female remake. I’m sure it’s no coincidence that Sony is releasing these films now in 4K. It’s a strict rule in Hollywood that success must be run into the ground until it is complete trash. “Actually it’s more of a guideline than a rule.”

Gino Sassani is a member of the Southeastern Film Critic's Association (SEFCA). He is a film and television critic based in Tampa, Florida. He's also the Senior Editor here at Upcomingdiscs. Gino started reviewing films in the early 1990's as a segment of his local television show Focus. He's an award-winning recording artist for Omega Records. Gino is currently working on his 8th album Merchants & Mercenaries. Gino took over Upcomingdiscs Dec 1, 2008. He works out of a home theater he calls The Reel World. Favorite films: The Godfather, The Godfather Part II, The Body Snatcher (Val Lewton film with Karloff and Lugosi, not the pod people film), Unforgiven, Gladiator, The Lion King, Jaws, Son Of Frankenstein, The Good, The Bad And The Ugly, and Monsters, Inc.
Ghostbusters II (UHD Blu-ray) (4K) Roots: The Complete Original Series (Blu-ray)